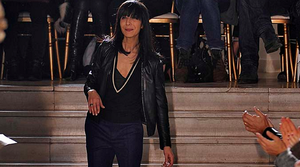 (NEW YORK) Meet couture’s latest player: Bouchra Jarrar has received the haute couture appellation just prior to her show next month. Jarrar, who showed previously as a guest on the couture calendar, joins 15 other Chambre Syndicale-recognized labels, like Chanel and Christian Dior. Jarrar’s label launched three years ago, during Paris’ couture circuit.

The most recent inductees prior to Jarrar are Alexis Mabille and Maison Martin Margiela. Both labels were given the appellation around this time last year. The couture calendar also includes six correspondent members like Azzedine Alaïa and Giorgio Armani, and seven guest members, including Schiaparelli, which is now under the creative direction of Marco Zanini. Jarrar will show her latest couture collection in Paris on January 21st.

Look of The Daily: Margot Robbie in Armani PrivÃ©