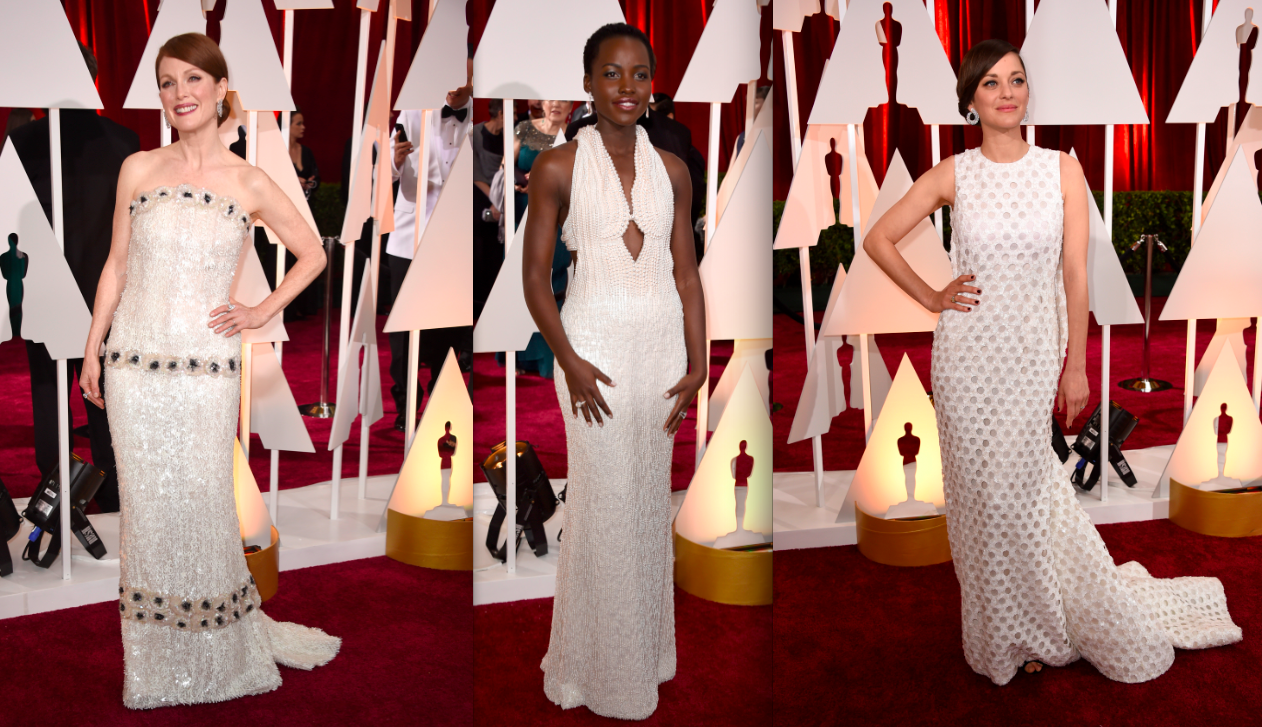 Another awards season has come and gone, and last night’s Oscars were the finale to a series of memorable red carpet moments. White looks dominated the evening, and host Neil Patrick Harris even took to the stage in his tighty-whities. But there were plenty of other colorful frocks that shared the stage. Notably, Gwyneth Paltrow arrived in what is becoming her signature Oscar color. So, who deserves an award for best-dressed? Here are all the looks that deserve a discussion…

Winter White: White has been having a moment throughout the awards season this year, and some of the best gowns of the evening were in blanc. Best actress winner Julianne Moore‘s white sequined strapless drop-waist Chanel Haute Couture dress was made for her by Karl Lagerfeld. Marion Cotillard remained faithful as always to Dior haute couture in a white eyelet gown with a low bustle in the back, while Lady Gaga showed up in a gorgeous custom Azzedine Alaïa. Gaga could have gone without the red dishwasher-inspired gloves, but then it wouldn’t have been a true Gaga moment, would it? Selma’s Carmen Ejogo wore a simple beaded slip dress with a Chopard choker and old Hollywood waves in her hair, and Faith Hill looked great in a deep-v beaded gown by J.Mendel and a 140-carat diamond necklace from Lorraine Schwartz. Anna Wintour also had a white moment at the Oscars, so you know it’s en vogue, darlings. But the best dress of the evening belonged to Lupita Nyong’o, who donned a cut-out Calvin Klein Collection dress exquisitely beaded in pearls.

Silver Belles: Oscar nominee Felicity Jones wore a custom silver ball gown from Alexander McQueen with an embellished bodice and a sweeping voluminous skirt, which garnered mixed reviews. We’re all for a dramatic Oscar fashion moment, but it seemed to overwhelm the petite starlet. However, Jones’ slim black gown with a beaded high collar that she wore to the Vanity Fair Oscar party later in the eve hit just the right note. Anna Faris looked lovely a strapless, full-skirted Zuhair Murad couture gown. Naomi Watts, who never misses her moment to shine on the tapis rouge, wore a silver custom Giorgio Armani couture gown with a black sequined bandeau that went around the back. The result? Thoroughly modern and unique.

B&W: Oscar winner Patricia Arquette showed up in a Rosetta Getty number with a ruched white bodice featuring a swath of fabric that fell elegantly over her shoulder, with a black skirt. It flattered her curves. Reese Witherspoon also kept it relatively simple in an off-the-shoulder black and white Tom Ford gown. Witherspoon stunned in the gown, but she also took part in a feminist campaign last night on Twitter with the trending topic #AskHerMore to encourage red carpet reporters to ask female attendees more than who they are wearing.

En Noir: Black doesn’t typically stand out on the red carpet. It’s the go-to for any dressy occasion, and therefore, it’s no that unique, but some starlets made it work last night. The ever-stunning Cate Blanchett wore a simple black dress from Maison Martin Margiela with frayed seams, accented with an eye-catching turquoise statement necklace from Tiffany & Co. that brought out her gorgeous baby blues. Sienna Miller donned a black dress from Peter Copping’s debut Oscar de la Renta collection that looked simple and chic on the actress. Margot Robbie was the picture of perfection in a deep-v black gown from Saint Laurent and a Van Cleef & Arpels necklace that once belonged to the Duchess of Windsor. “It’s worth more than my life!” Robbie told Ryan Seacrest on E! Entertainment’s red carpet.

In the Nude: Jennifer Aniston in a nude strapless gown isn’t exactly thrilling, but when Aniston took the stage to present last night, her Atelier Versace gown dazzled. Jennifer Lopez maintained the dramatic diva glam impact we’ve come to expect from her in a blush nude dress from Elie Saab with a long train and, of course, cleavage.

Regal in Rouge: Rosamund Pike finally had a flattering red carpet moment. The British beauty wore a lacy strapless red Givenchy gown that made the new mother’s waist look impossibly tiny. Dakota Johnson wore a one-shouldered fire engine red velvet Saint Laurent dress with silver embellishment at the shoulder that was sexy without being overt.

Pink: Gwyneth Paltrow stuck to the color that has become synonymous with the actress’ Oscars looks. Her one-shouldered pale pink Ralph & Russo couture gown with dramatic floral petals looked absolutely stunning with Paltrow’s fair skin and blonde locks. And how about those jewels? The “Fire Phoenix” earrings and 55.9-carat ring were from Anna Hu Haute Joaillerie.

A few misses… Emma Stone’s canary yellow Elie Saab dress didn’t quite hit the mark. Perhaps it’s because her other awards season looks have been such unusual, daring choices that have really worked on the young starlet, like the Lanvin jumpsuit she wore to the Golden Globes. Jessica Chastain is another actress that typically stuns on the red carpet, but the bodice on her navy Givenchy over-exaggerated her figure. Hey, even chicettes like these can miss the mark occasionally…

Vanity Fair’s Epic Oscar Party: All The Inside Dish!