Vanity Fair’s Epic Oscar Party: All The Inside Dish! 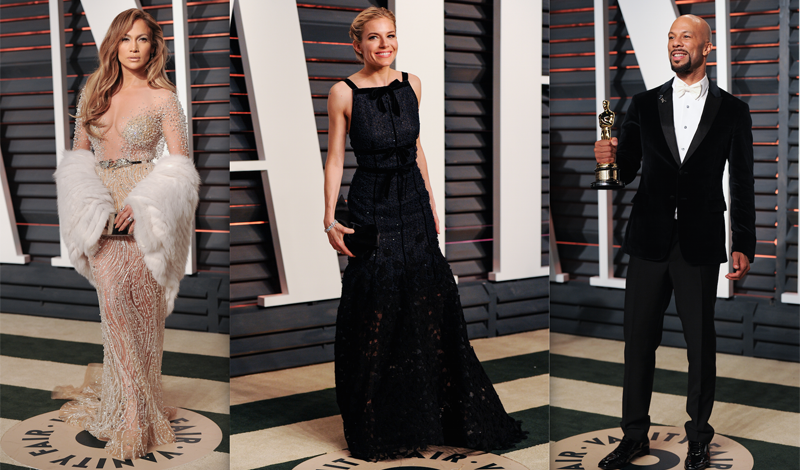 At 11:11 p.m. last night, après the Governor’s Ball, shiny gold Oscar statues started arriving en masse at the Vanity Fair party, hosted by the magazine’s editor in chief Graydon Carter. Julianne Moore, in Chanel haute couture, showed up with her Oscar. Common and John Legend had their gold, too, and once inside, Serena Williams posed for numerous iPhone 6 photos with Common’s Oscar, cradling it like a baby. Sienna Miller, in Oscar de la Renta by Peter Copping, laughed with other beautiful British birds like Poppy Delevingne and Rosamund Pike. Benedict Cumberbatch sipped a martini in his white dinner jacket, and Robert Pattinson pulled on an e-cigarette with a bottle of beer in the other hand. Gigi Hadid hung out with boyfriend Cody Simpson and Miley Cyrus. Meanwhile, Zac Posen and Courtney Love clutched hands and wove through the crowd.

From the ceiling, an 80′-long custom chandelier, clusters of large barrel lights cast the most flattering hue on the large rectangular space, built by Vanity Fair near the historic City Hall in Beverly Hills. In the first banquette sat a cluster of New Yorkers like Bob Colacello, Lynn Wyatt, Fran Lebowitz and Elton John, the latter of whom had just raced over from his own annual Oscar party. Cupcakes with all of the nominees’ names got passed around on large white trays. Karolina Kurkova pulled out her iPhone and carefully staged a photo of the cupcakes. J.Lo greeted Karlie Kloss like an old friend. There were more New Yorkers everywhere: Francisco Costa, Lauren Remington-Platt, Ansel Elgort, Tommy Hilfiger, John McEnroe and Patty Smyth, Dree Hemingway, Andrew Freston, Gayle King, Jason Wu, Carlos Souza, Stavros Niarchos and Jessica Hart, Jonathan Groff, Patricia Herrera, Andrew Saffir and Daniel Benedict, as well as Lydia Hearst, who told me she is living mostly in Los Angeles and has a TV show coming out in May. Anna Wintour brought daughter Bee Schaffer but left before midnight. Bee stayed on.

One of the best parts of the Vanity Fair party is the munchies. In-N-Out servers in their white uniforms passed around tons of burgers. There were fancy Oreos and “Better Nutters” and macarons by Thomas Keller. Douglas Friedman snapped a photo of Kylie Minogue, Dee Ocleppo, and Marjorie Gubelmann’s well-jeweled fingers digging into buckets of fried chicken and French fries.

There was a back room, and Jay-Z and Beyonce occupied the farthest booth. The DJ played Madonna, Michael Jackson, and George Michael. Outside the entrance, Graydon Carter’s son Ash, who often DJs on the side, danced impressively nearby Solange and her new husband Alan Ferguson. Just before 2 a.m., Jay-Z and Beyonce grabbed Solange and her husband, and they all headed out. Getting into the Vanity Fair party is like busting into Fort Knox–multi-checkpoints, thick plastic passes loaded with security code. Outside on Santa Monica Boulevard there wasn’t a paparazzi in sight, just guards in secret service-like suits. Jay-Z and Beyonce held hands and strolled slowly alone towards a black SUV before hopping in and zipping off into the night.