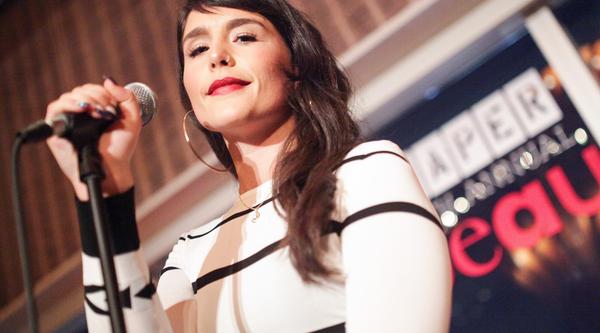 (NEW YORK) If you haven’t acquainted yourself with Brit crooner Jessie Ware‘s sublime sounds, a) you’ve been missing out, and b) it’s about time! We caught up with Ware on her recent visit to NYC, comprised of a slew of concerts, a Paper bash in her honor, and (thankfully) a few solid meals she was more than happy to rave about. As for those Adele comparisons, and her frank thoughts on both hot pants and crop tops? Without further ado, Ware takes it away!
BY ALEXANDRA ILYASHOV

Congrats on that Paper cover score! Quite the bash to celebrate last week…
It’s my first American cover; it’s probably my biggest cover. I don’t know if anybody really knew who I was at that party! It’s funny that I had this big burly security guard—it was kind of unnecessary because nobody was stopping me, and he was moving people out of the way. I felt a bit embarrassed, actually. I feel kind of awkward in those situations; I’m always apologetic because people are there to have a nice time and drink. They don’t want me doing a little acoustic thing! They want to have dance music!

Any fan encounters?
This guy came up to me wearing a gorgeous acid yellow woven blazer and a hoodie underneath—it sounds gross but it looked amazing. He was like, “Hi, do you remember me? You signed my Prada wallet at the Bowery Ballroom.” And I was like, “Oh my God, yes I do remember you! And I remember saying, ‘why are you letting me do this? I do not want to do this to your Prada wallet.’” He showed me the wallet, and it’s still there. He was singing all the words right in my face; it was really sweet.

On the fashion front, does anyone dress you?
My stylist, Avigail Collins, is a really good friend of mine. We just have loads of fun dressing up. She’s coming to Coachella, too, which I’m so excited about. She says we’re going to be the best dressed. And by best dressed, she means we’re going to look like Elizabeth Taylor has gone on holiday to Palm Springs. There’s going to be drama! We’re going Sophia [Loren] and Elizabeth [Taylor] on Coachella’s ass.

What’s the process like when Avigail’s gussying you up?
Usually, we’ve got no time. Avigail’s husband works with her, and I trust his opinion so much—he’s done a lot of styling, too. They’ve also got the most amazing assistant, India, and we just have so much fun. Damien has some R&B on, it’s either Teedra Moses or Miguel’s album or he’s playing me something new. They love Erykah Badu, too. So we’ll be playing music—and we’ll always take into account what food has to be ordered. They’ve got this amazing Korean place around the corner, or Avigail cooks latkes or something. She’s the latke queen. It’s gotten a bit hardcore recently, because we’ve had to fit for tours that take me to cold and hot places. She’ll have me try on loads of things; lots of things don’t fit—but it’s always the things that don’t fit that we don’t even want in there, anyway. She always makes me feel really great, and she knows what I will and won’t wear.

What won’t you wear?
Hot pants. Because I can’t! I’ve been so into wearing black, but I’m getting into color. We’ve gone really colorful for all of my American promo stuff. which is a lot of fun. We’re just having fun; it’s supposed to be fun! We don’t take it too seriously.

What do you hope Abby pushes you to try?
We’re onto color, and she’s got me in crop tops, so we’re doing well. Now she just needs to teach me how to walk in heels better, because I still struggle!

Favorite designers, s’il vous plait.
Ermanno Scervino makes you feel so sexy if you’re a woman that’s got a bum. I only just discovered him! I love Dominic Jones jewelry, and Alexander Voltiare is probably my favorite dress designer. Also, Miu Miu is just great to me—it’s really fun, kooky, modern, fresh, and wearable stuff. And Dolce and Gabbana, man! They celebrate a curvaceous, sexy figure. I think Topshop’s killing it as well. They’re really good to me; Topshop let [Avigail and I] design some of my stage outfits for the U.K. tour, and for my appearance on Jimmy Fallon.

You’re not the only Ware worth her buzz right now: tell us about your sister, Hannah!
She’s an actress, she’s older than me, and she’s been living in New York for six years. She just moved to L.A. and she has a big part in this ABC drama Betrayal, and she’s beautiful. It’s crazy because neither of us thought we were going to be these things.

What’s trickier: you navigating the music biz, or Hannah making it in Hollywood?
I don’t know! It’s weird how this has happened. She wanted to be an architect, then she decided to try acting. We both started [these careers] quite late, but we take it seriously and we can really appreciate that they’re happening because of that. We always have stories to tell each other!

Is there any pressure?
No, I’m not Adele, but for people to say that I sound like her is  amazing! People don’t take it too literally, so it’s just a compliment I think.

Another track title riff: What’re your “Wildest Moments” in New York?
The artichoke dip at Freeman’s—that was killer! Also, discovering that La Esquina was open and around the corner from our hotel. I was hungry late at night, and my boyfriend went to get us something to eat. He came back with Mexican food, took a bite, and realized it was La Esquina. Next time, we’ve got to get blood orange margaritas, too. I also always like Please Don’t Tell; I can never get in, though. And Frankie’s Spuntino in Brooklyn has the best meatballs. Also, I do like the Carlyle for a cocktail; I like to people watch. It’s always lovely old couples that you think live there, and they do a really good Cosmo.

Last one, promise: “Devotion” is another hit.  What are you a style and beauty devotee of?
Hoops! And eyebrow pencil or highlighter. Also, Jurlique rosewater balancing mist is amazing.