Sharon Osbourne Is Not So Gaga Over Lady Gaga 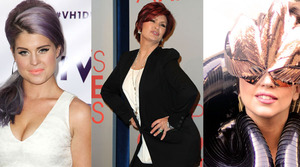 …Let us count the ways, shall we?

Strike 4: Lady Gaga fans attack Osbourne calling her “a big fat whore” and even go as far as to say the Fashion Police host should commit suicide.

Strike 6: Gaga refutes the interview on her website: “I have empathy for you Kelly, but I feel it culturally important to note that you have chosen a less compassionate path. Your work on E! with the Fashion Police is rooted in criticism, judgment, and rating people’s beauty against one another… What about your body revolution? It used to make me truly sad when I would hear people talk about your weight when you were younger, as I was bullied too. To see you blossoming into a beautiful slender woman who makes fun of others for a living is astounding.”

Strike 7 (the final strike?): Sharon Osbourne writes an open letter to Gaga on Facebook labeling her “nothing more than a publicly seeking hypocrite and an attention seeker.” In an attempt to extinguish this feud, Sharon has also contacted Gaga’s manager in hopes of getting the singer to address her bullying problem. After all, Gaga is the founder of the Born This Way Foundation against bullying! Obviously, Gaga never watched Sharon take on her neighbors during The Osbournes. Looks like mama Osbourne is having the last word, non?