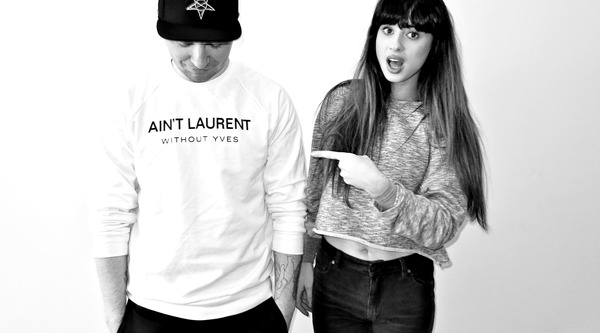 While 2013 was quite fab for Sergio Kletnoy, we think 2014 just might be his year. The assistant extraordinaire’s first week back on the job for Cosmopolitan‘s EIC Joanna Coles was certainly not a snooze. His usual schedule of rubbing elbows with musical geniuses and A-List encounters even featured a mention in the Observer. Just another day in the life, non?

Monday
Happy New Year! My 2014 officially started with a bang. After work, I headed off to the hottest event in town: the season three premiere of Girls, hosted by HBO with The Cinema Society at Jazz at Lincoln Center’s Rose Theatre. The afterparty was the after party at the Allen Room. I didn’t even know there was an opera-styled theatre inside the Lincoln Center, but leave it to Girls to teach me a thing or two about culture.

A few moments later, Dunham appeared on stage to introduce episodes one, two, and seven (which she promised won’t give away the plot). She was decked out in a sleeveless metallic dress by Rochas, four-inch heels in hand, and giddy as a kid in a candy store.

For the next 90 minutes we saw the brat pack working hard on mending their friendships with oodles of nudity, rehab, dirty talk, and profanities. There was even Amy Schumer, featured in one of the funniest guests spots ever, which included awesome jokes about bodily fluids. In one of the episodes, Lena rode her bike through town in a teeny-weeny green bikini and proved once again that her balls are bigger than 96 percent of the population. Oh, and La Wintour only stayed for two of the three episodes and watched both of them while wearing her signature shades. That’s all.

Tuesday
The New York Observer named JoCo and her husband Peter Goodwin “Media Power Couple of the Year”. In the accompanying story I was referred to as Serge. I’d sue, but it has a nice ring to it. Perhaps I should rename this column Serge Says. [Ed. Note: we’ll consider it.]

Wednesday
Starting today, every Wednesday at the Cosmo office will officially be called “Hottie Wednesdays!” I I sandwiched my time catching up on my work post-holidays between two hotties. First up: drop-dead gorgeous Danielle Campbell of CW’s The Originals (you know, The Vampire Diaries spin-off). Danielle plays a good witch, with just a pinch of bad in her, which is super hot. Now that I met Danielle, I am moving The Originals to the top of my DVR list.

I also hung out with Foxes, a.k.a. your fave new English singer. Trust me, she will be! Her real name is Louisa Rose Allen and she is going to be massive. Foxes is featured on Zedd’s worldwide hit “Clarity”, and if you haven’t heard it you must have been living under a rock. Her debut album Glorious is out in March and the album’s first single “Youth” is absolutely brilliant! For my interview with Foxes pick up the current issue of Marie Claire, with the eternally youthful Drew Barrymore on the cover.

Thursday
On Thursday, John Newman, a 23 year-old singer-songwriter from the UK made his stateside TV debut with an incredible performance of “Love Me Again” on Jimmy Fallon. A performer so electrifying, he can best be described as a love child of Amy Winehouse, Elvis Presley and Adele. Although it was past my bedtime, I rushed off to the Bowery Ballroom to stand for one of the most hyped-about artists to come our way from across the pond in a while. With two number one singles in his homeland, John is on his way to conquering the U.S. of A. His debut album Tribute is out this week and is already top five on iTunes and judging by tonight’s show at the Bowery, this new hybrid is going to be a major star.

“What Love Is” by Lolawolf

“Over It” by The Crystal Method & Dia Frampton

“Dreaming Of Houses” by Nina Persson

“Crying For No Reason” by Katy B

“Hold Me Down” by Cardiknox

“Let Go For Tonight” by Foxes

Cara Delevingne and The Gang For DKNY