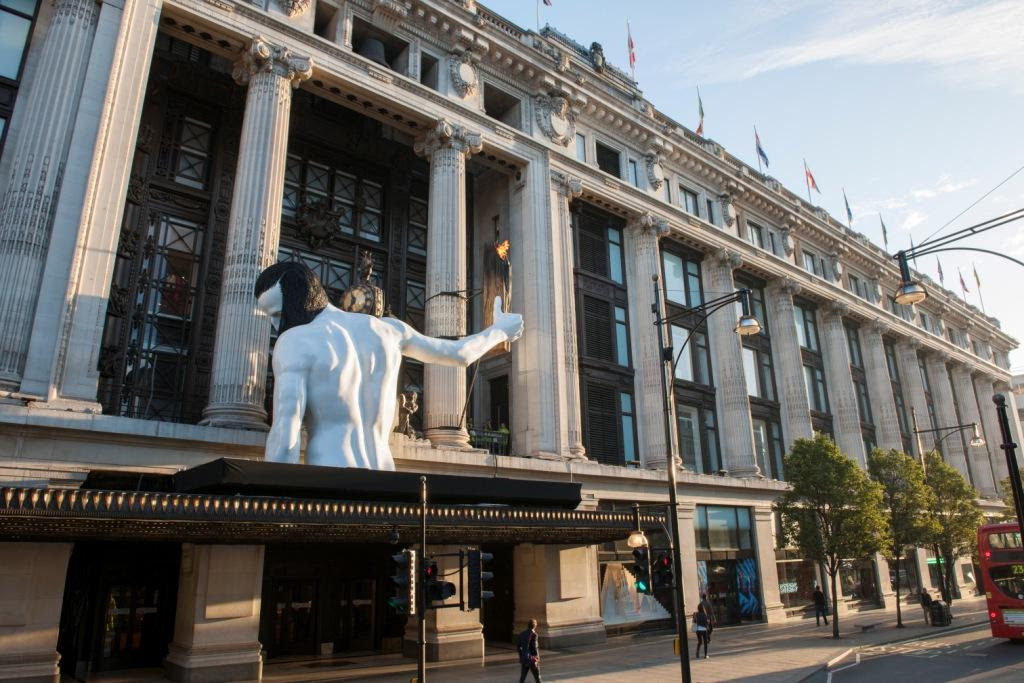 Who else besides Rick Owens would celebrate his 20th anniversary in the biz by erecting a 25-foot statue of his torso by sculptor Doug Jennings above the entrance to Selfridges? The statue weighs 1.5 tons, took 12 weeks to build by 20 crew members, the hair is made from almost 15 miles of coated black fabric strips, and the torso holds a torch that will be lit for 12 hours a day. J’adore! If you’ve ever been in one of Owens’ stand alone stores, you may recall a fully nude statue of the designer that greets customers as they walk in, also designed by Jennings. Or, you might remember last September, when he showed his Spring 2014 collection on a group of step dancers. The man has a sense of humor and an uncanny ability to provoke.

The statue will herald the unveiling of “The World of Rick Owens”, which opened September 1st at Selfridges in London. “The World of Rick Owens is the biggest single designer project Selfridges has ever initiated,” said Sebastian Manes, Selfridges’ buying director. “This is a testament to how passionately we feel about the concept and how important the brand is to our business. We are extremely excited to be bringing Rick Owens, who so effortlessly avoids the mainstream, to the very forefront of the Selfridges’ fashion proposition.” The project will include an exclusive 20-piece collection and will be Owens’ first creative collaboration with a retailer. Each piece will be labeled with Selfridges’ signature yellow label and Owens’ torso motif, and will be available at Selfridges.com, Selfridges Manchester Exchange and Birmingham stores, and the Rick Owens concept store on the ground floor in the Rick Owens store-in-stores in London in womenswear and menswear.

As for the concept store, expect an assortment of clothing, furniture, tableware, design pieces, albums, and books that give a glimpse into the designer’s world. The concept store will be framed by four windows with conceptual scenes from the designer, as well as an installation by Japanese sound artist Ryoji Ikeda. Each window will feature a white lunar surface created by L.A.-based architect Patrick Tighe. Below, a list of what you can expect from each window:

Window 20 (flagship corner window): A black wood staircase against a white background ascends from the window and descends into the concept store, with fog continuously moving across it. Meanwhile, flaming Rick Owens logos will be suspended on both sides of the window.

Window 21: An image of Owens’ fit model Terry-Ann, as the monstrous heroine from Salomé, the designers’ favorite Opera with music by Ricard Strauss and words by Oscar Wilde. A screen in Terry-Ann’s forehead will show scenes from Alla Nazimova’s 1923 silent film of Salomé. Her eyes are hollowed out with flickering white lights and a black liquid pours from her lips.

Window 22: An image of model Edouard taken by Owens that depicts Edouard as Jokanaan, a character in the story whose head is requested on a silver plater by Salomé.

What’s not to love? Owens’ fans will likely want to make a visit to London for this one. On second thought, everyone will want to check this out, fans or not. If only this spectacle were stateside, darlings!