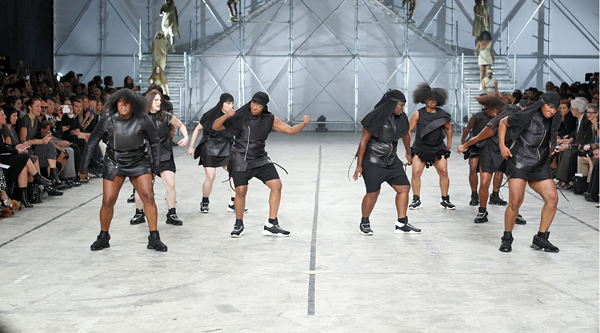 (PARIS) Rick Owens
In case you’re looking at the photos online and thinking, “What the…?” Let us tell you: this was a game changer! When Rick Owens told us yesterday, front row at Gareth Pugh, that his show was “going to be fun,” we had no idea he had this in store. What ensued was a full on dance performance by four American stepping sororities.

The show began with one group of dancers fiercely marching and pounding their chests in black leather tribal-looking asymmetrical garb as they descended a duo of staircases onto the runway. There were leather mini dresses, shorts paired with leather vests, and skirts made from ornamental balls, and some looks were worn with head coverings. As they reached the runway they broke out into dance, followed by another posse in all-nude uniforms. Some sported headpieces that somewhat resembled nun’s habits. Then, another set of dancers in grey emerged, followed by a set donning white shift dresses. The full slew of dancers then linked arms and rocked back and forth as they exited the runway.

We’re certain this will be the greatest spectacle we’ll see all week. The show had the kind of energy that cannot possibly be recreated in photos—and it had literally everyone buzzing post show. To wit: “fantastic” was Fabien Baron’s one-word review. “I thought all the girls looked a bit like rugby forwards, but if it had been real models it wouldn’t have been a fashion moment.” But what was the real take away? “There’s a whole culture thing we never knew about in Europe—and Owens brought it to Paris,” said Baron. “I thought it was such a beautiful thing and it made you think of all the other people trying to reinterpret 100-year-old brands and DNA and all that sort of passable mediocrity.”

Other show attendees were heard exclaiming, “Well, that was the best thing I’ve seen! I might as well go home now!” As Carine Roitfeld rushed to her car, she added, “It was such great energy. I think it changed a lot of things.” And that’s just it. It was more than just a fun spectacle: It was about real clothes on real people in a completely new context. It was just downright exciting.

Furthermore, many of the dancers had to get their first passports to fly to Paris for the show—plus, word on the street is that rivaling step dance groups typically never join forces. A true moment, resonating beyond the fashion community? Oui. We hear Danielle Levitt (a director that has worked with Owens and his wife in the past) will be making a documentary about the experience. Suffice to say, this wasn’t just a fashion moment, it was the fashion moment of the season.