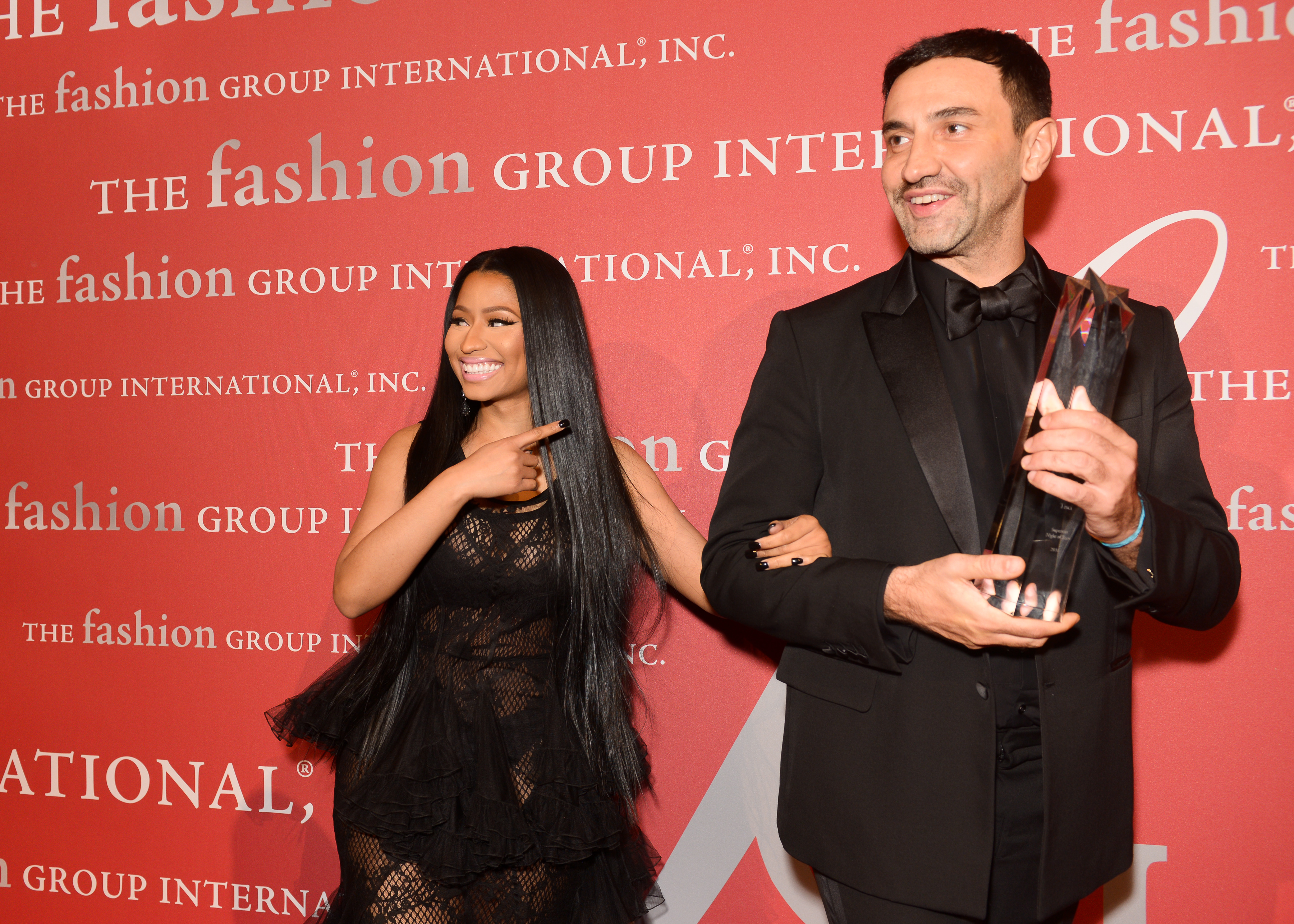 It was a chilly and rainy New York City evening, but that didn’t stop the fashion elite from coming out to support one another at Cipriani Wall Street for The Fashion Group International’s 33rd Night of Stars last night—an annual event hosted by the global, nonprofit organization that benefits the fashion industry. An impressive cast of designers and fashion industry execs were honored at this year’s gala, as well as top models and celebrities (spoiler alert: Nicki Minaj) who presented their talented pals with awards. Per tradition, Simon Doonan was on host duty. The highlight of the evening, though, was Givenchy’s superstar Riccardo Tisci, who was presented with the tres fitting Superstar Award by Minaj. The duo was fashionably late, and arrived halfway through dinner before shutterbugs could get a shot of the mega moment. Minaj’s glam squad was waiting in the red carpet wings for last minute makeup and hair touchups—the Hollywood treatment was visibly in full effect.

“I don’t normally read at these things, but I had to make sure this was right. This is, like, the biggest thing I’ve ever done in my life,” Minaj said in her speech honoring Tisci. “I’m here tonight to present the Super Star Award to a friend, an icon, a trendsetter, a visionary, an undisputed champion in the world of fashion, a beautiful soul, a heart of gold, and last, but certainly not least, a sexy-ass piece of meat: Riccardo Tisci.” Now that’s a way to garner some attention! Tisci thanked Minaj, LVMH, FGI, and others, including his “champion” Carine Roitfeld, his “inspiration” Marina Abramovic, both of whom were at the gala, as well as his “friend” Anna Wintour.

Erdem Moralioglu was also recognized, as honoree in fashion by pal Ruth Wilson, star of  Showtime’s The Affair. “I’m so thrilled, proud, flattered and honored to be here. Ruth is a friend and I love her. It’s nice to go through something a little more nerve-racking like this with a friend!” he told us. Tory Burch also won in this category, and was excited about the recognition from W’s Stefano Tonchi. “It feels pretty amazing to be honored from your peers. I actually think that’s the biggest honor,” Burch, who was wearing a mix of vintage and her own label, told The Daily. Other wins of the eve included Pamela Baxter in the beauty category; James Curleigh (for Levi Strauss ) for Brand Heritage; Julie Wainright of The RealReal for Innovation in Retail E-commerce, presented by Amy Fine Collins; Bunny Williams, who was honored for Interior Design by Architectural Digest EIC Amy Astley; Joe Zee in the media category; Pat Cleveland for Fashion Provocateur; Andrew Bolton for the Lord & Taylor Fashion Oracle Award, presented by Baz Luhrmann and Catherine Martin; and H&M’s Daniel Kulle, presented by Zosia Mamet, a first-timer at the awards. “I’m super excited to be here with all these epic fashion heavy-hitters. It’s kind of cool…I feel a little like an outsider. This is sort of like their Oscars!” Mamet told us. “I love fashion, but it’s not something I feel like I could say I’m a part of. I feel like I snuck in or something!”

The most heartfelt moment was when when Iris Apfel accepted the award for Auteur of Style and received a standing ovation from attendees. “It’s been 11 long years since I left the hollow halls of the DD building to journey uptown…I began a whole new life. It seems that in these 11 years of living in a parallel universe, it’s all been so surreal. I’ve done so many wonderful things because of the generosity and kindness of all you people here. I mean, such crazy things!” she said as she accepted her award.

Tommy Hilfiger and his wife Dee also took the spotlight as recipients of the Humanitarian Award, presented by model Hailey Baldwin. “I’m being honored for the Humanitarian Award but I think it’s everyone’s duty to give back,” Hilfiger told us on the carpet. “Especially we, who are so fortunate in business and in our lives…to give back is actually very satisfying.” We obviously couldn’t miss an opp to ask Hilfiger about his recently announced second collab with Gigi Hadid. “It’s beyond anything we’ve expected—worldwide! She’s amazing—she’s been on a world tour for Tommy in Dubai, Shanghai, Tokyo….We have a whole new collection and we’re going to do an amazing, outrageous fashion show and come out with new and more products.”

The Tommy and Dee Hilfiger Guide To...