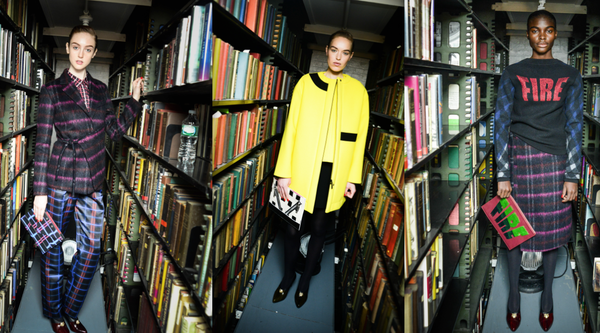 (NEW YORK) Kenzo
Back to school! Yesterday Humberto Leon and Carol Lim showed their Pre-Fall collection for Kenzo in a series of three presentations to editors at the General Society of Mechanics & Tradesmen on 44th Street in New York. Editors sat at library tables as models descended from above, exiting the stacks until they formed a staggered front against the books on the library’s main floor DJ Andrew Kuo accompanied the garb with oldie hits from the likes of Roy Orbison. Celebrities and scenesters aren’t your typical fare for the Pre-Fall circuit. But leave it to Lim and Leon to bring out guests like Spike Jonze, Sleigh Bells’ Alexis Krauss, Va$htie Kola, and top it off with a surprise model appearance from Alex Wek.

The clothes were an edgy take on collegiate. A plaid pencil skirt was paired with a sweatshirt emblazoned with the words “Fire” that zipped down the back, styled partially unzipped. There were patterned pantsuits, check overcoats, and pleated mini skirts worn with button-up colored shirts. Bursts of color came on pieces like a citrus yellow round shouldered coat or a cobalt blue asymmetrical wrap skirt. Pumps featured printed wood enamel and metallic tigers. “We wanted to observe both the ordinary elements of Northwestern America and their reflection,” said the design duo in a press release. “We approach the collection with a view of portraying the everyday as distorted, classic as two-faced, the norm as twisted, and the familiar as slightly skewed.” In other words, it was too cool for school.

Toni Garrn Goes Out To Sea For Blumarine

Natasha Lyonne on Her Directorial Debut for...