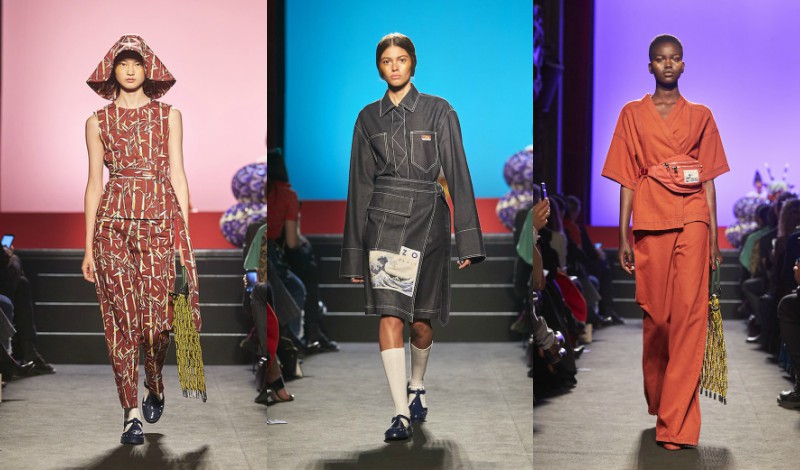 It’s never a dull moment with Carol Lim and Humberto Leon. This season at Kenzo, the duo treated guests to a traditional Japanese Kagura performance, a theatrical dance dedicated to the Shinto gods. The dancers came from nine different Kagura troops from the Hiroshima Prefecture. All of the dancers are amateurs, who train three to four hours a week after work to prepare for their weekend performances. Kenzo’s Kagura performance was produced by Kubo Yasuhiko with group director Sunada Mitsunori and artistic director Masuda Keiji. Sound and lighting was orchestrated by Yokoyama Yoshiaki. The Kagura dance was called “Yamata no Orochi”, which told the story of the eight-headed and eight tailed dragon that eats a young girl once a year.

After the celebration of eastern culture, Kenzo debuted La Collection Memento N°2, which celebrated Kenzo’s launch of denim in 1986. Lim and Leon took archival designs and reworked them with staples for the warmer months like swimwear and Hawaiian prints, while still incorporating Japanese elements. There were kimono jackets in Japanese denim and jeans came in high-waisted or workwear versions for women and a heritage cut and carpenter jean for men. “As Americans working at a French house on a denim collection, we can’t help but talk and think about all our amazing memories of running around in our favorite jeans. These conversations take us to where we are today as parents living in America,” said the designers in their always thoughtful show notes.

And as always there were symbol motifs, this time in The Great Wave of Kanagawa and the original flying tiger. The collection also incorporated vintage Kenzo prints like the bamboo tiger and bamboo stripe, which appeared on anoraks, dresses, and shirts.

“This collection being a mix of inspirations from Asia to America, is a tribute to self-expression,” said Lim and Leon in their notes. “For us, as Americans, now more than ever, it’s time to celebrate diversity and free-thinking.”

Microblading 101: We Tried It, Here’s Our Review