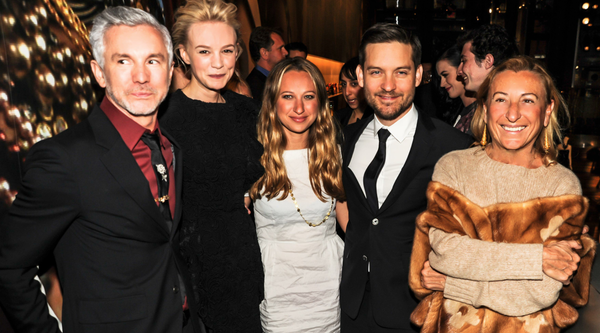 (NEW YORK) It was a roaring good time at the Prada store in Soho last night as some of the biggest faces in fashion, film, and music collided for an evening to celebrate the looks Miuccia Prada designed for costume designer and art director Catherine Martin for the hautely-anticipated film, Gatsby.  The designer created 40 looks for the ’20s flick, transforming several looks from the Prada and Miu Miu archives. While the archival looks were not ’20s-inspired, Miuccia Prada has said she was surprised by how many of her pieces fit with the era.

The looks adorned mannequins along the tiered steps of the Prada store and hung displayed from racks toward the back of the store as guests like Joe Zee, Katy Perry, Florence Welch, and Jessie Ware checked out the stunning designs (Perry and Welch were clad in Prada proper, while Ware donned Miu Miu). Upstairs, the film’s director, Baz Luhrmann along with wife Martin and Ms. Prada made a quick appearance to fête the fruits of their hard work. Meanwhile, Gatsby stars Carey Mulligan and Tobey Maguire mingled upstairs in a roped-off section with Maggie Gyllenhaal, Isla Fisher, and Grace Coddington.

In a month full of a barrage of Gatsby-themed collections, it was thrilling to see the actual creations up close and personal, since as much ado has been made about the fashion as about the film itself. The looks will be on display through May 12th at the store in New York City, and will later move on to the Prada Tokyo Epicenter in Tokyo from June 14th through June 30th followed by Shanghai at the IFC Mall in mid-July. Party on, darlings!
PAIGE REDDINGER