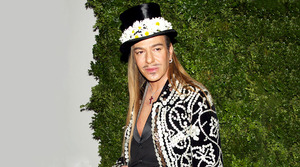 (New York) John Galliano is getting his groove back. In a surprise announcement today, Oscar de la Renta will be lending his studio to the designer for the next three weeks. This will be Galliano’s first official design gig since his infamous anti-Semitic comments during a boozy evening at a Paris cafe were inflammatory enough to oust him from both Dior and his namesake label.

Galliano is now sober after a stint in rehab to face his alcohol addiction and has avoided the spotlight for nearly two years post-incident with the exception of designing Kate Moss‘s sublime wedding dress for her marriage to rocker Jamie Hince. Some are speculating that Anna Wintour may have had a hand in orchestrating this duo thanks to her long friendship with de la Renta. What exactly the designer will be doing in his borrowed studio for three weeks remains unknown, but de la Renta did say he would consult the designer on his upcoming Fall ’13 collection. In that case, we’ll be counting down the days until its unveiling.
PAIGE REDDINGER

Look of The Daily: Renee Zellweger in Hugo Boss