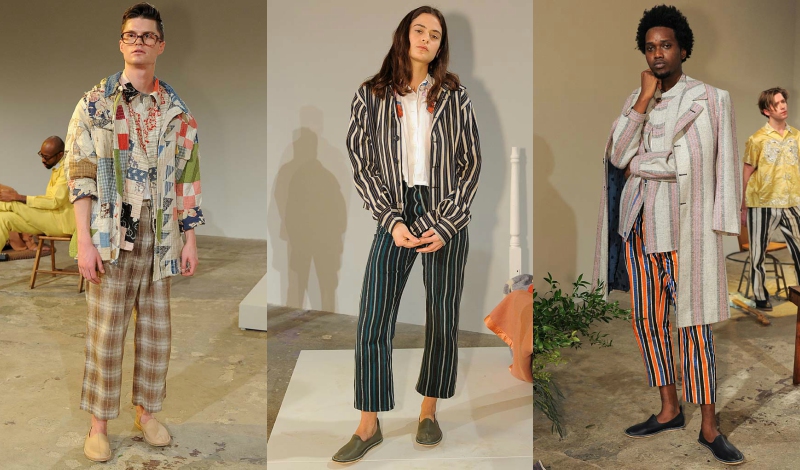 This morning, Emily Adams Bode of Bode staged her New York Fashion Week: Men’s presentation at Skylight Clarkson Square, which was reminiscent of a special place: home. Models were performing routine, domestic-like activities at a slowed-down pace—one was folding blankets on a bed, another was using a vintage telephone, and one was reading a book. That’s just a taste of the action! The set was so thought out, you’d think you were on a Broadway set—the attention to detail extended as far as the lighting, which gave a golden-esque effect, as if it were early morning or right before sunset.

“It’s about my family,” Bode told us, when asked what inspired her Fall/Winter 2017 collection. “My mother and her sisters grew up going to Cape Cod every summer from Worcester, Massachusetts. Their dad would take them every Friday. It’s this very special place, especially in summertime. So I started talking to my aunts and mother about this time when they gave up their Cape house, after their father died. It’s this tragic but beautiful thing, how they talk about their home and their memories, and what summertime meant. They paint this picture of a domestic space and all of their memories that occurred within it. So I started to form this idea of presenting this time in their life, but it’s a representation of a point in time that is recognizable to anybody.”

As for why she decided to launch Bode in the first place? “I always made things from vintage or other fabric that I had, because I thought it was such a waste of time to make something that would only need slight fittings that you were going to throw away. I officially launched it in July 2016. For one of my samples, I made trousers out of an antique quilt top, and I loved the way it looked, so I started doing more of that. I wasn’t necessarily making clothes out quilts to begin with. I was using what I had around. I made stuff for myself out of antique fabrics and was repurposing it. If I bought a dress, I would make it a jumpsuit. I didn’t really think of it as a business model until later.”

The collection features lots of warm, colorful hues (think dusty yellows and burnt orange, to name a few) with fun patterns thrown in. The designer is known for sourcing vintage quilts and bedding to create one-of-a-kind menswear pieces that are chic enough to wear out yet comfortable enough to want to curl up in at night. For this collection, she utilized handmade quilts from the 19th and 20th centuries, mixed with printed cottons from the ’30s and ’40s. Mission accomplished, indeed!

Bode is one of nine P3 designers in our “Up Next” competition with Samsung and the CFDA. The winner gets the cover of our February 10 NYFW issue—if you like what you see, you can vote for the label HERE.