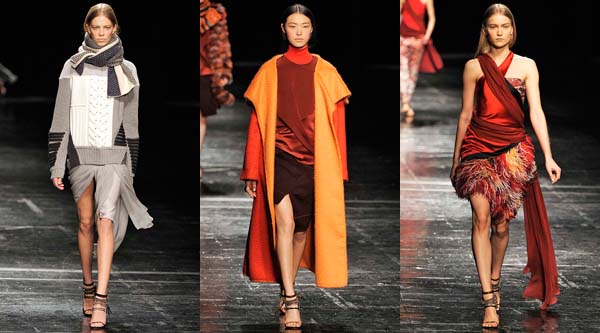 (NEW YORK) Prabal Gurung
To warm up the crowd, Prabal Gurung started off with a mixed media gaggle of sweaters: cabled, ribbed, waffled, and topped off with an intricately wrapped scarf. While the bottoms of choice were made of barely-there wispy silks, the sentiment of warmth resonated through the rest of the collection as it segued into riskier categories. One cape gave up his entire inspiration, with its double-faced hues of deep burgundy and a true orange, like an updated version of a Tibetan monk’s wares. Gurung was inspired by a trip back home to his native Nepal, and the surrounding areas of Tibet and Mustang. The rest of the collection continued in bright variations of red, burgundy, and orange, sandwiched between grays, blacks and deep blues. The classic blazer even got a redux, with panels of silk and an asymmetric hem, tried out a few different times. When the cocktail dresses arrived, one after another, Gurung settled into what he knows best. The look was sexy, with big cutouts, varying necklines, and deliberately random drapes of fabric; all the makings of a tapis rouge look.

Kate Spade New York
Perhaps you’ve seen snaps of Deborah Lloyd’s most recent Kate Spade New York collection on Instagram? Those shots of a Chinese takeout box bag were hard to miss, but there were more to look at than cheerfully kitschy bags (although there were plenty of those, too!). Lloyd based the collection on her travels in Asia, most notably in Tokyo and Shanghai, perhaps felt the most in the bright colors she delivered. An electric yellow topper stood out brightly while hues of navy emulated the uniform of the stewardesses and captains of the speed trains in Japan, in silk jumpers and pea coats. Kelly green mixed with cobalt blue was a brilliant pairing as well. The best part about the label is seeking out the tiny details that pull the pieces together: a little bow on a pair of red leather gloves, a large bowtie at a collar, and a pair of leopard print Keds. For the girls that just want to have fun, but look good while doing it, turning to Kate Spade is always a solid bet.

Charlotte Ronson
Blending upbeat music, festive ambiance, and detailed clothing bade for a fun showing of Charlotte Ronson‘s Fall 2014 collection. Adding a modern twist to Little Lord Fauntleroy’s signature style, Ronson utilized printed florals and lace, given an edgy twist thanks to tailored bodices with crepe and black leather. A leather jacket paired with a black on black rose embroidery creates a feminine yet handsome aesthetic to her collection. Ronson highlighted the skaldic detailing and printed floral details, although this season saw far less bright, multi-colored prints than usual. It was a darker spate of looks, as evidenced by a weighty printed velvet. “it is important to be able to wear the clothing at that perfect weight but still have it be flattering and chic,” Ronson told The Daily. Throughout the collection, a simple, elongating silhouette pervaded. Demure skirts hung to just below the knee, and aside from one leather circle skirt, volume was kept to a minimum. A touch of flirtiness came courtesy of an off-the-shoulder, printed, berry-hued dress trimmed in velvet, plus a similar style with sheer and black horizontal stripes. Her collection was complemented by tunes from Ronson’s talented twin sister, Sam Ronson, who proudly sported a blazer from her collection as she DJ’d.

Jill Stuart
“Boyishly poetic,” was the defining phrase used by Jill Stuart when it came to her Fall 2014 collection. Inspired by Stuart’s take on “the girl of today” who she describes as massively unpredictable, unattainable, and unimpressionable. As Stuart pondered this girl, things fell into place: the music she would listen to, the clothes she would wear. The show opened with a slew of flirtatious yet sophisticated looks. For example, a playful metallic-printed romper paired with polka-dotted tights topped with a decidedly more tailored camel-hued mohair cape. Embroidered dresses and lengthy layered skirts in shades of navy, maroon and black were allowed the ‘unpredictable’ contrast of juicy sangria rouge coats. Stuart’s Italian-made textiles were accompanied by outerwear of extravagant furs including beaver, rabbit, and mink. The collection closed with combinations of structure and fine lace details in the form of A-line dresses adorned with embellishments, sequins, and sparkles that screamed party girl and tailored shorts rendered in supple leather noir whose execution was far chicer than any Bermuda short we’ve ever imagined.

Ruffian
What’s the best thing about a Ruffian show? You never know what to expect. Though we’ll never understand why these Brooklyn boys make us get up so early on a Saturday during fashion week, they always make it worth it. This season they gave something for every woman in a collection dripping with glamour inspired by the work of portrait painter Petrus Christus. The outcome? Bold, daring, and full of surprises. Bravo!