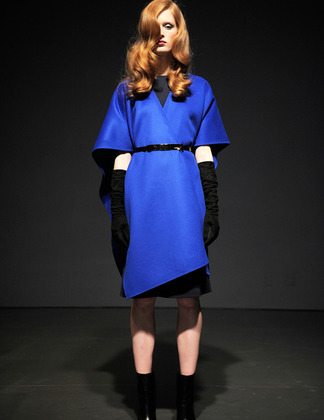 (NEW YORK) St. John
Trays of champagne and wine lined the corridor leading into the St. John presentation last night: Ah, the joys of the freer presentation format! Another treat: the gorgeous pieces on display, like a navy knit cape dress (the designer’s personal fave; one of ours, too) and a double-faced cashmere coat with big fox fur cuffs, to a teal liquid satin gown that created an impossibly statuesque effect on an already-towering model. The impeccable collection was whipped up by the line’s senior vice president of design, Greg Myler, and offered up sophistication and elegance without feeling dame-esque.

Billy Reid
“The process itself was my inspiration,” Billy Reid told The Daily. “It’s the first time we actually designed men’s and women’s together and we really saw how the women’s clothing affected the men’s.” The women’s pieces had an effortlessly cool romanticism, revealed in floor-length gowns. To wit: a long sleeved, rose patterned black chiffon dress, sporting a knee-high slit, say, or a red skirt suit with a longer hemline in the front. The result: Sexy, not severe. Also on the docket: A long white country-style dress with a floor-length coat that’d look just as at home in the South as it would in the British countryside. The distressed brown leather a-line knee length skirt was a standout that found its way into the menswear in motorcycle jacket worn by a long-haired, bearded ginger model that looked right at home on Reid’s rustic runway. A navy jacquard print blanketed an evening dress and a pair of pants, also patterning a men’s tuxedo jacket. The designer himself was as big of a hit as his clothes: editors dashed backstage en masse to shower praise, with Reid doling out plenty of friendly southern hugs and drawling “thank you’s” in return.

Nicole Miller
The designer debuted her Fall collection to a packed house last night, despite the storm that was stepping on everyone’s style (and at certain points, even blowing in through the roof). A full row of celeb devotees and socialites like Kathy and Rick Hilton, Peter Brant Jr., Nigel Barker, Nicole Galicia, Eve, Ashley Simpson and a newly-blonde Leigh Lezark braved the elements in support. The inspiration point? Menswear, translated through a filter of downtown cool. Think skinny paisley pants, sheer button-downs, and sequined crop tops. Maybe it was the weather, but the outerwear was particularly outstanding: colorful hooded parka and multi-fabric patterned coat with an excellent, big fox fur collar, for example.

Nautica
It’s anniversary season this fashion week and Nautica is no exception to the celebratory rule, ringing in their 30th year in business with their Fall 2013 collection. Titled Black Sail Collection, the latest Nautica offering ratcheted up the luxe level, without betraying the brand’s roots. For fall, the Nautica man is still out on the water, albeit a little more bundled up. Pops of color (red, yellow, and orange) were sprinkled throughout looks that were mostly grounded in navy and grey, and a bit of black. Practicality reined with techno fabrics, fur-trimmed waterproof jackets, and beige anoraks. Knit long-john style pants also made a showing, albeit a less wearable option. Nary an inch of denim was spotted, proving that the modern man can dress comfortably without wearing jeans. Accessories are often an oversight at men’s shows, but the brightly-hued socks, navy suede chukka boots, and cherry red aviator sunglasses complemented more subdued looks. Of course, the eye candy was abundant per usual, as Sean O’Pry opened the show with a smoldering stare and a bright red parka. One or two truly expensive pieces, like a washed leather blazer in grey and a navy blue leather peacoat, kept the collection runway-relevant. Here’s to three more decade of Nautica-ness!

Tess Giberson
Giberson’s fall collection, titled “Evolution,” was presented in a large, open studio, concrete floored and wooden planked platforms. The clothes followed suit, beginning with skinny brocade trousers and a wool blazer in somber black colors, then evolving by the end to bright knits with jaggedly vertical waves of red, green, black, and brown. “The collection was inspired by a handmade quilt made by my mother in the 1970s,” Giberson told The Daily. “In the beginning it’s an idea, then by the end you can see the direct translation into the garment,” she added. Like many New York based designers, Giberson finds strength and solace in black, with most of the opening looks, such as a floor length, loose cape dress and long wool coat rendered in the color. The overall lineup featured 20 looks, heavy on the legging-snug trousers, jeans, and knits with bunched-ankle detailing on many a piece. The monotony of black was broken up towards the end with a particularly stunning pair of suede leggings in a denim blue hue that appeared to be both waxed and denim-ish at the same time. Also of note: The mods got in on the action, banging gongs and keeping rhythm with the booming, eerie vocals of singer Sahra Motalebi.

Charlotte Ronson
Taking a break from her usual big runway show production, which is typically a who’s who roster of downtown scenesters, Ronson presented her Fall collection as a presentation set to the tunes of sister Sam‘s playlist of sixties classics like Petula Clark‘s “Downtown” and The Ronette’s “Be My Baby.” “We just wanted it to be more intimate so you could see the clothes,” said Ronson. “Runway shows get so hectic that they aren’t even about the clothes anymore.” The inspiration this season? Ronson looked to her British heritage and  old photographs of her socialite mother Ann Dexter-Jones from the sixties. Hunter green, tartan plaids and tweeds took shape in a-line skirts and dresses, skirt suits with moto-cut jackets, but sexiness infused tight purple leather minidresses and a cut-out floral print dresses that were subtly skin revealing. Perfect for the young 20-something set in attendance!

Battle of The Best Dressed! The Daily Scouts for Vanity Fair