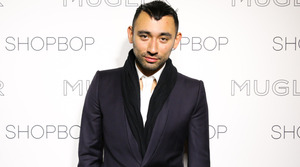 (NEW YORK) After two years as creative director of Mugler, Nicola Formichetti is bidding adieu to the brand. “I have had a great time working in Paris with Mugler over the last two years,” says Formichetti. “It was a challenge to re-invigorate the house for a new generation and audience, particularly one that has grown up exploring fashion through the internet.” According to Joel Palix, president of Clarins Fragrance Group and director general of Thierry Mugler, the split is mutual and Formichetti will be, “a historical part of the Mugler legacy and known as the force that catapulted us forward.” Mega-stylist Formichetti was first brought on board to succeed designer Rosemary Rodriguez and to revive the ready-to-wear. Formichetti showed his first collection for Fall 2011, for which he enlisted his muse, Lady Gaga, to walk in the show. Palix plans to reveal a new brand strategy shortly; expect a focus on the momentum that Mugler gave the ready-to-wear, along with heavy emphasis on the brand’s blockbuster fragrances.

To recap: Why, exactly, did the label’s eponymous designer quit fashion? As Mugler himself told The New York Times‘ Eric Wilson in April 2010: “I had had enough of spending my time always being on my knees, making other people look amazing.” As of 2007, Mugler underwent a major body transformation. The result? A much more muscular version of Mugler’s former physique; since then, he prefers to be referred to as Manfred Mugler.