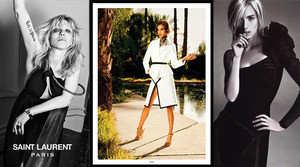 (NEW YORK) The buzz is at full blast regarding Hedi Slimane‘s creative choix at Saint Laurent. In his latest move, the designer enlisted Courtney Love to front the brand’s music meets fashion campaign, which also features fellow rockers like Marilyn Manson, Kim Gordon, and Ariel Pink. It’s only natural that he would enlist Love as she was the assumed inspiration behind his grunge heavy Fall 2013 collection. She even applauded him post-show by tweeting: “Having gasms at the idea of rich ladies buying what we used to wear, finally someone got the look exact, no beanies.”

Slimane’s look is decidedly edgy, which had us antsy for a stroll down campaign lane with the house’s various designers from 1979 to 2013. Take a peek at our Gallery featuring all the goodies from the YSL glory days: Gian Paolo Barbieri who photographed Iman in 1979 for Monsieur Laurent, Alber Elbaz who cheekily recreated his version of the famous French painting, Gabrielle d’Estrées Et Sa Soeur, with Kate Moss and Mario Sorrenti, Steven Meisel‘s interpretation of Tom Ford‘s sleek vision of Kim Peers in 2001, Stefano Pilati‘s glam gal Arizona Muse photographed by Inez and Vinoodh, and of course, Slimane‘s new grunge revival portraits. Which one rocks your world?

Hayden Panettiere Gets The Glamour Treatment