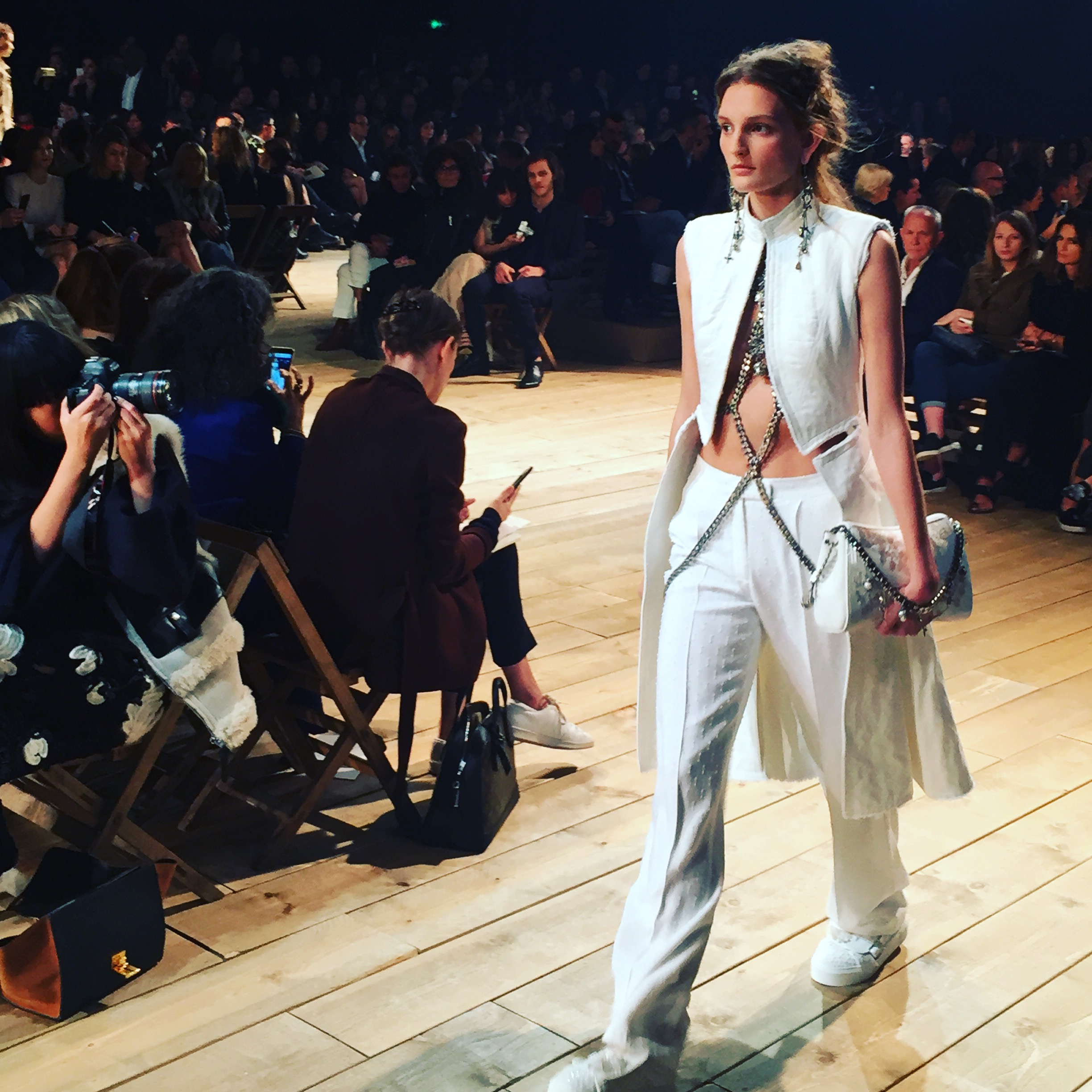 Just after the Alexander McQueen show in Paris, your Daily caught up with 19-year-old model Julia Fleming. Although this is her first season on the runway—she signed with Next Models in July—she has already graced major catwalks, including McQueen and Céline. With a gorgeous visage and an intriguing personality, Fleming is already one to watch.

How many shows have you walked this season?
It’s my first season, and I think I’ve walked 30 shows. I did nine in New York, eight in London, nine in Milan, and then in Paris, so far, I think I’ve done seven. I’ll be walking three more, and I’m still waiting to hear about some others.

What was the first show you ever walked?
Victoria Beckham. It was such a fun one. It was really beautiful.

Were you nervous?
Oh my god, yes! It was really nice though, because Victoria Beckham actually talked to me right before I walked. When she found out it was my first show ever, she reassured me. It was really cute.

What have been some of your other favorite shows to walk?
I really liked Rag & Bone, because I did looks with them for five days leading up to the show, so I knew their whole team really well. I tried on every article of clothing in their collection one hundred times so it was so exciting to finally see the final product. Before, I had only seen it being put together.

Where are you from?
Philadelphia.

How were you discovered?
Through a friend, actually. One of my friends from Philly signed with Next in Miami, and the scout was in town talking to him. My parents were on a bike ride and ran into my friend and the agent at Starbucks. They stopped by for coffee and mentioned that I used to model with a little agency in Philly. I just did it part-time. They sent him pictures and I signed two weeks later and moved to New York.

Are your parents amazed at everything you are doing now?
Totally. We didn’t know what to expect. We though it would be really slow. We didn’t know if it was going to take off or be a hard first season. So when it all started to take off, they were really excited. It was cute, because they made me a Facebook group for all of my family and friends and they put the pictures up right after every show.

How old are you?
Nineteen. It’s been crazy. It was just a weird coincidence. I had just done a year of college at Ursinus, which is in the suburbs of Philly. I miss it, but this isn’t really something you can pass up.

Have you been living it up?
Yes, I love it. I mean I’m exhausted and I’m so sick right now, but it’s been a lot of fun. I haven’t had time to really see anything. In London, I didn’t even sleep. In Milan, I had a little more free time so I went shopping. Here I haven’t had free time yet.

Do you think you will?
I don’t know. It depends on whether I get booked for some of the big shows at the end. I won’t know until the night before if I’m walking. I had a fitting last night for Céline at 11 and the show was today and they called me back for a fitting at three in the morning. I was asleep, but my agent called me and asked me if I could go, but then they told me I could go in the morning, which was really nice. I’ve gotten calls in London and Milan and gone for fittings at 2:00 a.m. before.

What’s in your Céline shopping bag?
Oh my god, we got these really nice bags for walking in the show! I’ve been showing people all day. They’re so cool. I’m obsessed with it. I can’t wait to use it.

What other swag have you gotten from the shows?
Well, I’ve gotten about nine t-shirts since the start of the fashion weeks. The sweatshirt I’m wearing now is from Sportmax [laughs]. I’ve accumulated fragrance collections, a bunch of random stuff.

How do you unwind when you catch a moment?
I’m a huge Harry Potter fan. I’ve read the series about 10 times and I’m starting it again. I’ve seen all of the movies and can quote them. My family is like, “You’re reading that again?”

The Daily Roundup: Kanye West Sits Down with SHOWStudio, Magdalena Frackowiak’s Next Act