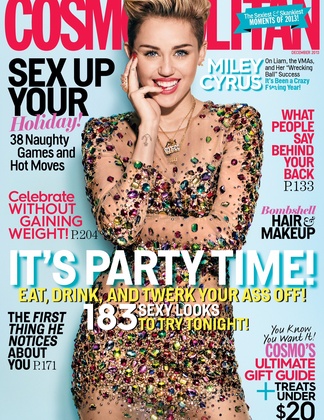 It’s only been eight months since Miley Cyrus last graced the cover of Cosmopolitan, but she’s back for more! The December issue of Cosmo, which hits newstands on November 5th, features Cyrus covering herself up with just a few crystals and not much else. In a rather candid interview, the singer covers all the topics you’re still wondering about: Robin Thicke, her breakup with Liam Hemsworth, and of course the infamous VMA performance that is still on the tip of everyone’s tongues. With all the critics out there, Cyrus is happy to have some supporters on her side. “It’s easy for Kanye to support me because we’re in totally separate lanes of competition, but for Katy [Perry] to say that she appreciates what I’m really doing for the pop industry, that keeps you going,” said Cyrus. And  we have a feeling that Cyrus will keep going and going and going.