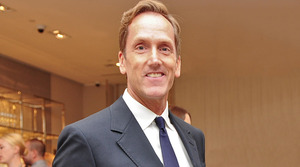 (NEW YORK) Tamara Mellon has tapped Glenn McMahon as her company’s CEO and president to oversee her eponymous label, which will launch next month in select retailers in the U.S. and Europe. McMahon will be replacing Fritz Winans, whose departure was also announced today. In July, McMahon resigned from St. John, where he spent six years as the president and CEO. Prior to that, he was president of Dolce & Gabbana USA and Ellen Tracy, in addition to holding an executive vice president position at Giorgio Armani Collezioni and a vice president position at Donna Karan. “[McMahon] has great experience managing global luxury businesses, that was the level of experience we were looking for,” explained Mellon in a statement released this morning. The brand also plans to debut an e-commerce site by February 2014 as well as intentions to premiere freestanding boutiques in both the U.S. and Europe. McMahon’s first day at Tamara Mellon is today.

Finally You Can (Google+) Hang With Rachel Zoe