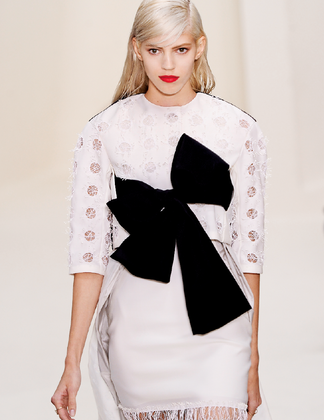 A must-know fresh face you may have missed from our gorgeous, first-ever Model Issue during NYFW…First Karlie, now Devon Windsor. Is there something in the St. Louis water supply? A moment with the bleach-haired beauty of the season.

You were in Paris for Couture. How’s your French?
Not so good. I’m trying to learn, but it’s so complicated!

How were you discovered?
At a bar mitzvah by a photographer who also did model photography. She asked if I ever wanted to shoot with her. I feel like other models have better discovery stories.

Eh, the bar mitzvah’s a nice detail. What happened next?
The stylist on my first shoot ended up being the editor of a local magazine, so I did a shoot with them. After that, I looked at the agencies and ended up signing with West. I was 14. When I was 16, I flew up to New York and met with over 10 agencies and ended up choosing IMG.

Karlie Kloss is also from St. Louis. Are you guys pals?
We know each other, but it’s not like we hang outside work. I’ve met her a couple of times because she’s also with IMG, and talked to her backstage at the Victoria’s Secret show. She remembered me! We talked about mutual friends from back home.

And you both walked in the Victoria’s Secret show.
Oh my god, I was in a dream. It’s every American girl’s dream to walk that show. Just casting for it was beyond exciting. I didn’t think I’d actually get it.

What were you feeling on the runway?
I really like Taylor Swift so to be on stage with her was amazing. It sounds silly when they say you should just have fun on stage, but you actually really should.

What was the prep like for you for the show?
I had just come out of fashion week so I was working a lot. I didn’t have time to go to the gym every day. Some girls say they work out for three hours every day, but I can’t say I did that. I wasn’t training for months like some of the other angels.

What do your friends from home think of your job?
I don’t know. I don’t think they’d ever say what they think to my face. But they’re very supportive. They’re all in college right now so obviously it’s kind of hard for them to relate. It was only after I did Victoria’s Secret that they were impressed. St. Louis people aren’t really in-the-know about fashion.

Are you a fashion girl?
Totally! My style has changed so much from even just a year ago. I like fashion, but it’s a problem. I’m so picky, and everything I want, I can’t necessarily afford.

What’s your natural hair color?
Dirty dark blonde. Now it’s bleached white. I really like the way it looks in pictures, but it’s definitely hard to maintain. I have to get it touched up all the time.

What’s your 10-year plan?
I have no idea. I don’t even know what I’m going to be doing in a year! So much has happened in the past six months. I’ll hopefully be a more established model and living the life!