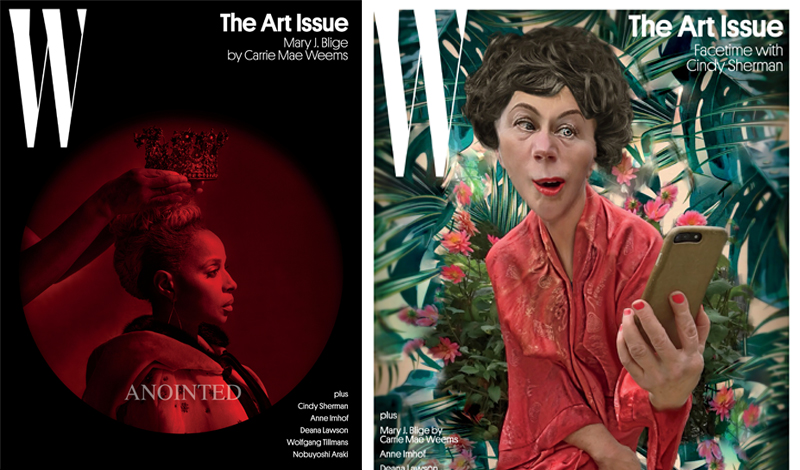 W Magazine has unveiled two covers for its annual Art Issue featuring two distinctive and highly-respected women in their own fields within the arts. One stars Grammy-award winning singer Mary J. Blige, lensed by Carrie Mae Weems, and the other features artist Cindy Sherman, in one of her conceptual portraits. In the interview with Blige, the singer discusses her role in the critically acclaimed Mudbound, which will debut on Netflix on November 17.

“I didn’t realize how vain I was until I started working on Mudbound,” Blige said in conversation with Weems. “Once I saw how my character, Florence, lived [in a shack on a farm in Mississippi], I thought, Wow, I’m really a vain person. When I went to the movie set to do the first day of fittings, I was Mary J. Blige: I had just done a tour and a show, so I was all, you know, I had wigs and weaves and all sorts of things going on, and Dee Rees was like, ‘No! We want to see you. You can’t have a perm, you’re going to have minimal, minimal makeup.’ And I was like, ‘What about lashes?’ And she said no, and I was like, ‘Really? Florence doesn’t have lashes?’ That part was a lot! A lot! But once I tore away and sunk into the character, Florence actually gave Mary—me, the so-vain person—a little more confidence so that Mary didn’t feel like she needed to depend on all of that. I cut my hair really short. Florence really liberated me. Just committing to and trusting that character kind of helped to save my life. I could also relate to her because she reminded me of my aunts and my grandmother who lived in the South. My mom used to send us to Savannah every summer. My grandmother had her own garden, chickens, cows; so I’ve seen chickens slaughtered, I’ve been on a farm.’

Blige also commented on where she sees her career going next. “I want, at some point, to not have to work so hard. I want peace of mind and acceptance of self, totally. I know that’s an ongoing process, so every single day I’m working on that, and it’s been hard ever since this challenge I’m having with this divorce. It was such a terrible thing. It made me see myself as ‘I have to be better than this’: I was never good enough; I was never pretty enough, smart enough. And there was someone chosen over me. It was like, I can’t stay, but it really let me see, Mary, you are better than that. You have to continue to grow.”

In Sherman’s interview, the photographer breaks down her “Selfie” project for W, as well as what’s behind her celebrated Instagram. “I actually hate the idea of selfies,” Sherman said while discussing recent images she has been making with her iPhone. “People say, ‘Oh, but you’re, like, the queen of selfies… I really kind of cringe at that thought.” Since taking her Instagram account public this past summer, she’s gained tens of thousands of followers for her portraits that use extreme photoshop-type editing tools, also used in her cover for W. Think photos of women with warped noses, piercing eyes, inflamed skin, and other major adjustments. “It’s really only about making things prettier,” she says. According to W, Sherman’s project for the book “apes the social media phenomenon known as the plandid—the planned candid photograph, which is ‘like a newer, hotter version of the selfie on Instagram,’ as one social media expert recently put it. They are carefully composed images of studious nonchalance.” Click here to read more about her project.