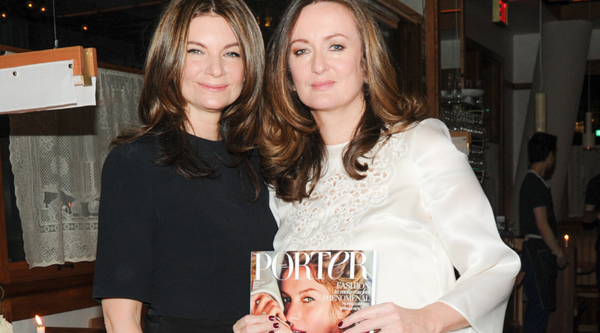 How was Porter born?
It all started with a conversation I had a couple years ago with Natalie [Massenet] after a show in Paris about combining real fashion authority and women’s trust in magazines with Net-a-Porter’s digital reach and instant gratification. [Pause] Sorry, can I call you back from another line? Literally, there’s a choir practice going on. We have a Net-a-Porter choir. [Hangs up]

Okay, that’s better. So, why Porter, not Ms. Porter?
I don’t see Porter as a last name. I see it as the first name of a brilliant, stylish woman of the world. In my head she’s a modern-day Katherine Hepburn. She’s a brilliant woman whose name sounds like a last name.

Do you worry people will mispronounce it?
I think it will happen. I worked at Bazaar, which I’d hear people pronounce “bizarre,” but as people get to know her, they’ll know how to say her name.

And understand she’s not carrying luggage?
She’s so separate from that idea. Hopefully, when she’s on the stands, people will see that.

Your surname is no picnic.
Oh, I’ve heard everything. People never know whether to put an “s” on the end or not.

How does Porter fit into the Net-a-Porter orbit?
They’re very much mates, but there’s still an independent streak to Porter. We’re working with brands Net-a-Porter stocks, but also ones they don’t.

How much of the product won’t be on the site?
We haven’t added it up! We’re making a magazine with the same integrity as Bazaar or Vogue, and we work with a lot of brands we don’t carry, like Chanel, Vuitton, and Dior. If a shoe in Porter guides you to Net-a-Porter or Gucci, we don’t mind. We’re just trying to help women find what they want. Some people think of Porter as a catalog, but it’s a real mix.

Do you get the catalog assumption often?
When I first called our creative director, Robin Derrick, about Porter, he said, ‘I thought you were bringing me in to do a catalog—this is far more interesting!’ [Laughs] That’s obviously what everybody thinks of first. Hopefully, we’ll surprise them.

What sorts of surprises will we find?
There are seven big, juicy features that are serious pieces of writing: David Bailey, Harvey Weinstein, and Cindy Crawford all wrote for us. We interviewed Angela Ahrendts, the former Burberry CEO, who’s at Apple now. There’s a piece on New York Times war photographer Lynsey Addario, talking for the first time about her kidnapping in Libya. We shot Uma Thurman in her secret country retreats. There’s a very strong art section, a 17-page travel section, a 15-page beauty section, and a party section, “Night Porter.” It’s almost worth naming it Porter just to use that.

Is there anything similar on the newsstand?
Our approach to the front-of-book is very different. For the rest of the book, we definitely haven’t thrown the baby out with the bath water. There’s some influence from my time at Bazaar, but also from magazines I really love, from Vanity Fair to The Gentlewoman.

What kind of creative talent is on board?
We worked very closely with Inez and Vinoodh as our cover photographers. It doesn’t feel like a fashion shoot; it’s a serious, intimate portrait. It’s beautiful and womanly. It’s quite different for them.

Who’s on your team?
Our fashion director, Gabriele Hackworthy, was with me at Bazaar, and has been fashion director at Vogue in Japan, China, and Australia. She’s been in international publishing in territories where I haven’t got much experience. I worked with our features director, Vassi Chamberlain, a long time ago; she was previously a contributing editor at Vogue. Alex White is our senior editor-at-large, Kathy Phillips was at British Vogue, and our fashion features director, Kay Barron, was at Grazia and Bazaar.

Besides an in-house choir, what are the perks of being at Net-a-Porter?
The staff discount is a very nice thing.

What’s the office vibe like?
Natalie’s vision of how the workplace should be is really inspiring. During school holidays, children come  in and learn computer programs. I think Natalie’s trying to turn everyone into tiny tech fashionistas.

How long have you known Natalie?
I worked with her 15 years ago at Tatler, when she was a fashion editor and I was a features editor. We went our separate ways, but we’ve always stayed in touch. It’s a proper friendship.

How much of your wardrobe is from Net-a-Porter?
Quite a lot. Too much, actually.

Do you pay more for talent because Net-a-Porter’s backing you?
Nope, editorial rates all the way through! Our budgets are probably in line with Vogue UK.

Have you had any trouble getting designer access?
With a launch, everything is a challenge. You’re asking people to take a big leap of faith. We may be slightly down the pecking order until people see what we’ve done, but we’ve ended up with all the pieces we dreamt of having.

Is your fashion closet essentially Net-a-Porter’s warehouse?
I wish! We work with press samples because we’re shooting so far in advance of any stock on the site. The Porter closet runs just like any other fashion closet. I’m sorry if that killed your fantasy, but it’s true.

Any plans for publishing in other languages?
If everybody wants the magazine in a different language, we’ll probably give it to them. If we need to make it in Mandarin, we will.

Thoughts on Jeremy Langmead at Christie’s?
We’ll miss him massively! He was my brother editor when he was at Esquire and I was at Bazaar, and again here at Net-a-Porter. He’s done an amazing job on Mr. Porter, and it’s validating that a big company like Christie’s wants beautiful content.

Brendan Monaghan, GQ to a T