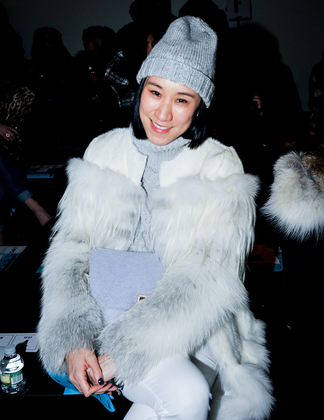 We chatted up Lucky EIC Eva Chen amid the flurry of shows this week. Turns out, despite her amazing career and mad social media skills, she’s the coolest closet nerd we know…

What were you like in high school?
I was and remain a total nerd. I went to an all girls school on the Upper East Side and I was extremely awkward. People will notice that when I do throwback Thursday on Instagram, I don’t ever post pictures from high school. My dark years were between the ages of 7 and 27. I have a soft spot for anybody who is slightly awkward like Lena Dunham, because I still feel very much that way.

How do you deal with criticism from people in this role?
We’re living in a new age of social media, so anytime someone has something to say about Lucky, they attack me personally as well. That’s a new challenge of editing today. Everyone is going through the same thing. With the good comes the bad, and you have to take it with several grains of salt.

Were you surprised that so many people had an opinion about the Kerry Washington cover?
Not really. Scandal is the most live-tweeted show, and Kerry is a style phenomenon. Someone has something to say about every single cover. From my first cover to my last cover, everyone’s a critic. I embrace it and look at it as constructive feedback! There will never be a day where there’s no criticism.

V Is For Victory