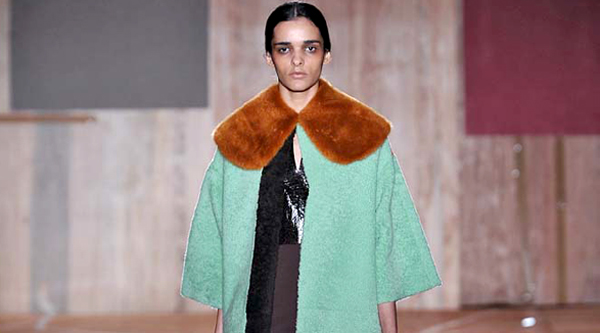 (LONDON) Roksanda Ilincic
Commencing with a parade of pinks, Ilincic dabbled in most every textural and silhouette medley imaginable of the hue. Grazing the ankles or calves were the pervading hemlines. On the pinked up front, a slinky sleeveless number in a particularly washed out iteration of the rosy hue, with a long-haired, melon-hued fur framing the shoulders was especially lush. Lightly window-paned grey plaids mingled, too, cut fairly body-con and evoking a bit of the forties. A refreshing dose of mint entered the color repertoire as well, and deliciously so. Standout toppers got trotted out next, in a colorblocked series, the most lust-inducing of which appeared in looks 14 and 17, both of which tinkered with a palette of seafoam, mahogany, and (unsurprisingly) pink to dramatically collared ends. On the pieds? Trippy lace-up booties in groovy pinwheel-esque stripes, done in combos like orange and maroon or teal and chocolate. A little bit Wonka, a lot of character to complement the quirky-cool aesthetic that the tapis rouge faves at team Roksanda Ilincic churned out for Fall.

Simone Rocha
Also opting for a pinky palette to kick things off for Fall, Simon Rocha then progressed into a proportions-tinkering journey rife with some impracticalities (supersheer nude skirting or leopard PVS shifts, anyone?) and peppered with sweet detailing (veiled bows in the hair; funky flatforms or oxfords on the pieds).The sturdy, volume-festooned day dressing of the show’s earlier run were simple enough to envision shimmying into on the daily, studded with enough interesting touches to keep the chic, not just utilitarian, aspect intact. Think darted pleats at the slightly loosely slung waistline of a rosy day dress, briefly hemmed coats and slightly puffy bomber-and-mini take on skirt suiting in the same pinks, and white button down and cropped trou combos. Some edge, to be sure, balanced with enough classic shapes and lines (j’adore a good, deep V that trails off the shoulders) to keep things, for the most part, anchored in the wearable.

Daria Werbowy Gets Her Maiyet On