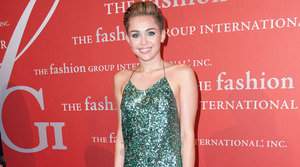 (NEW YORK) Miley Cyrus Nabs a Spot on Time’s Worst and Best Dressed Lists [Style]
Her nude bikini at the VMA’s was decidedly the worst outfit of the year, but a sparkly Marc Jacobs gown landed her at number 6 on the best dressed list.

Dressing in the Future, As Told by Spike Jonze and Opening Ceremony [New York Times]
The styles, based on the film Her, aren’t all that different from what we’re wearing today.

For a Touch of Romance, Check Out the Latest TV Clip for Marc Jacobs’ Daisy [Nylon]
The short is just another collab between the designer and Sofia Coppola.

What’s the Formula to Create a Collaboration Between an Artist and a Designer [Business of Fashion]
Louis Vuitton knows success; they’ve partnered with the likes of Takashi Murakami, Stephen Sprouse and Yayoi Kusama.

Following Her Win at the British Fashion Awards, Sophia Webster Will Open a Second Pop-up Shop [Vogue UK]
Located near Opening Ceremony and Burberry, Webster’s wares will be displayed in a whimsical manner.