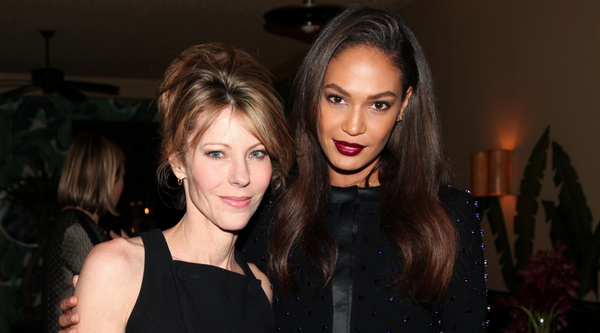 (NEW YORK) A klatch of ELLE editors and an intimate posse of chicsters dined at Indochine last night in honor of their January cover lass, Joan Smalls, and iconic photog Michael Thompson, who shot the mod for the glossy. Besides a slew of ELLE editrices, the din brought out the likes of Prabal Gurung, Wes Gordon, Athena Calderone, Chelsea Leyland, plus Emily Weiss and (ELLE alum alert!) Nick Axelrod of Into The Gloss.

“It’s an honor to be on the cover of ELLE. Think about how many homes it reaches, and how many people see the magazine when they’re, like, buying their groceries. To be a part of that is unreal.” So, who does Smalls really hope sees her splashed across the cover while, say, waiting on the supermarket check-out line? “The guy in high school who told me that if I gained 10 more pounds, he’d date me, because I was so skinny. So, this cover is for every girl who got picked on in school because they weren’t good-looking enough for guys!”

On set, Smalls was happy to report that things were “stress free, with so much laughter.” Ingredients of the fun-filled shoot: “good music and lots of sugar”. Hold the caffeine, though, since Smalls doesn’t drink coffee (crazy, right?). It was Thompson’s first-ever shoot for the Hearst glossy.

The shoot was a delightful blast from the past for ELLE’s creative director, Joe Zee. “It was a reunion of me, Michael Thompson, Dick Page, and Serge Normant. We were the four Musketeers in the Nineties at W. The whole photoshoot was just déjà vu for all of us. It was in the days before internet, iPhones, and email—maybe even before faxes…” As for his styling subject? “I knew I could put anything on Joan and that girl could work it!”

Our chat with Zee got a pleasant interruption from Iman, as she wove through the crowd in a striking jumpsuit to double-kiss the creative director—and emphatically explain what, or who, lured her out on a night that would’ve been mellow otherwise. “This is the only party I would come out for, because I’m having a foot surgery next week. If it wasn’t for Joan, I wouldn’t be out.” Any medical-induced jitters for the supe? “Of course! Anything that has to do with anesthesia makes me nervous.” We let Iman count the ways she j’adores Smalls: “First of all she’s gorgeous. She oozes style. And she’s just aware—not in-your-face aware, just aware. To be that way when she’s so young? She was raised very well.” So well, in fact, that Iman’s never ladled out advice to Smalls. “To be young is to make mistakes, learn from them, and move on. She’s very sure of herself, and it’s great.”

After migrating to their seats, the crowd listened to Robbie Myers share her own glowing sentiments about Smalls. (That is, once the chorus of “Hi, Robbie!” Hey, Robbie!” quieted down.) “She is an ELLE girl in every way. She’s smart and charming, fit, and totally in charge of what’s going on in her own life. Also, I hang out with her in the gym, and she’s incredibly fit!” Sign us up for whatever workout regimens those two are on.

Then, guests tucked in, family style, to Vietnamese summer rolls, spicy beef salad, chicken and shrimp filled Vietnamese “ravioli” (think long and lean, like a spring roll) and an Asian herb salad, laden with with mint and laced with lemongrass. Designer Jonathan Simkhai bounced from table to table between courses to schmooze, while the latest kids to get that CFDA/Vogue Fashion Fund stamp of approval—Public School’s Dao-Yi and Maxwell Osborne—had a long night ahead après-dinner. Where to, following the feast at Indochine? Their studio. The duo enjoyed the shareable entrée spread (slices of duck breast and filet mignon, both perfectly pinked and rare, plus a gingery steamed sea bass) before heading back to the office.

As martini glasses of mint-sprigged ice cream got doled out, alongside baskets of apple pie fritters (hot, fried, and unabashedly indulgent), the crowd cross-pollinated between tables to squeeze in some final mingling before bidding adieu for the eve.
ALEXANDRA ILYASHOV

Rent The Runway To Permanently Close All...