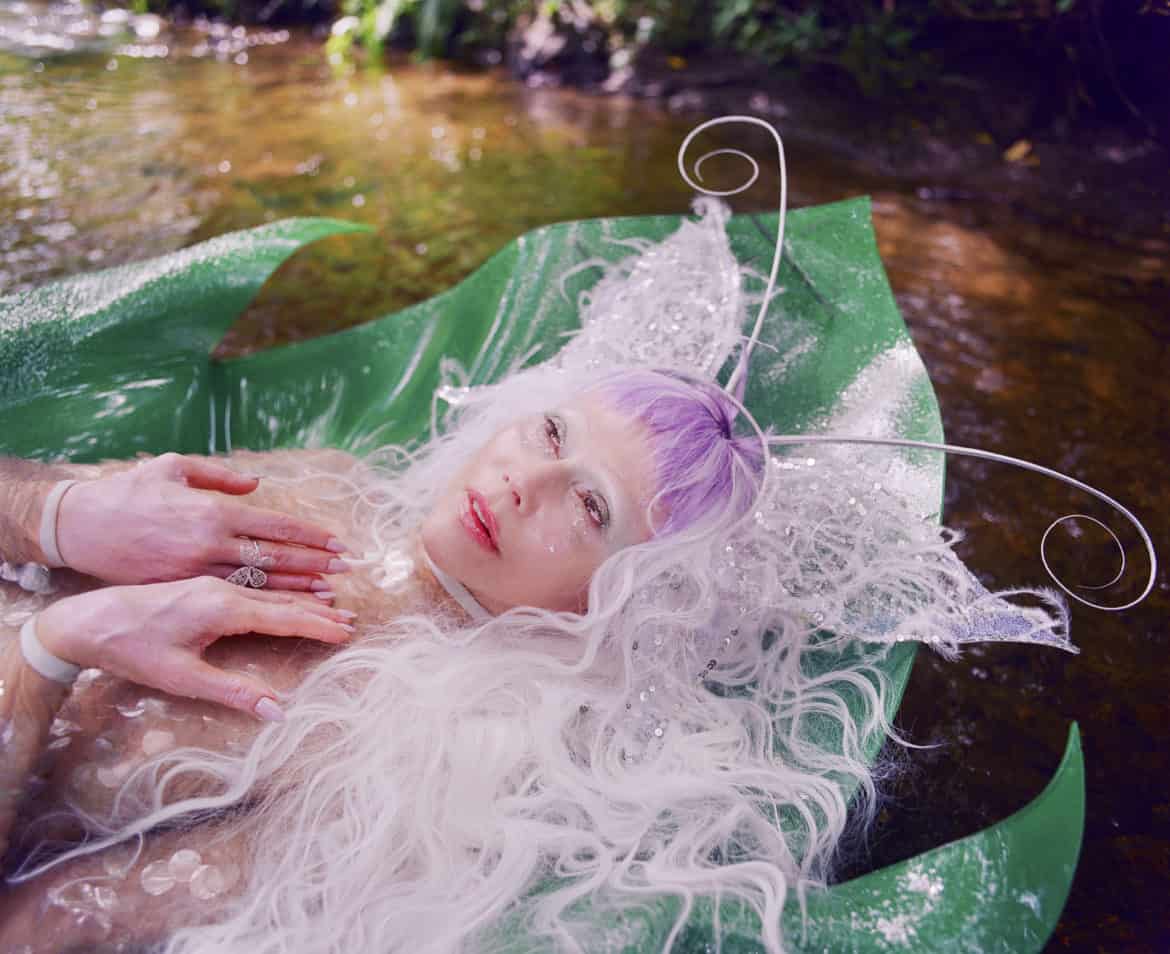 Legendary New Yorker Susanne Bartsch has teamed up with rising star photographer Jordan Millington on an incredible array of images. This Friday, you can check out the photos in the one-day exhibit, Evolution of Innocence, at Lume Studios in Manhattan. Millington tells The Daily how his own personal experience inspired these whimsical shots, what it was like to work with the nightlife icon, and how it all came together.

What’s the story behind Evolution of Innocence?
I had two concepts I wanted to create. One was about having fun as a child, and another one where I wanted to make huge inkblots that allowed the subject matter to lose themselves in a heavy, wild, and dark energy which we can all go through. At first, they were going to be two completely different shoots, but then I realized the two shoots complemented each other. It made me think about my personal life and how it has developed over the years. As a child, I was really happy. As I got older, I started to have mental health issues which made life very hard until about the age of 24. I went through a lot of learning and self-development which allowed me to feel happy again. These new moments of happiness reminded me of what it was like to be an innocent child. Hence, the title Evolution of Innocence.

How did you first meet Susanne?
We first met while she was producing Nemacolin resort’s Pride Event. It only took me a few hours of time with Susanne to realize that she would be perfect for my concept! She had the qualities of a fun-loving child and at the same time, she felt down-to-earth and very real, which inspired me to ask her to be a part of the project. 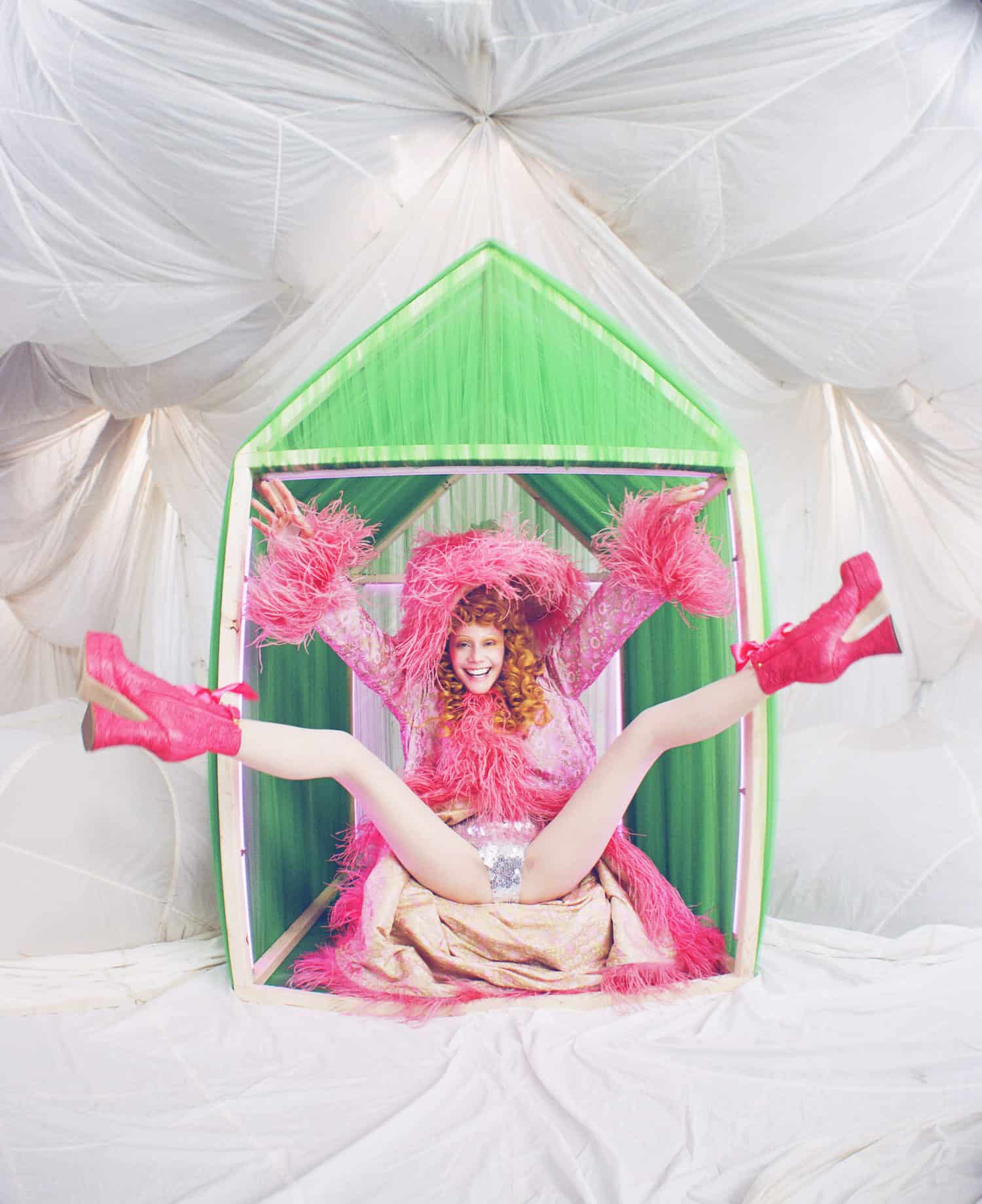 What was it like shooting her?
Susanne was a blast to shoot with! She carries herself with so much love and light and always has a level of humor and joy to her. Even when we had to dive into the darker emotions, she’s always able to make a joke in the middle of shooting that would cause all of us to break out into laughter. One of the funniest moments was when she was in this fog vortex that was made out of a huge metal tube with fog. It was a very serious moment. She lifted her hands and started to stroke the tube and said, ‘This is how you jerk off an elephant!’ And we all cracked up.

Where did you take the images and how long did it take?
We shot the story in Millerton, New York at Uplight Studios, owned by my friends and collaborators, Elizabeth Kline Murphy and Philipp Haemmerle. They had recently opened the studio and I’m so fortunate to be the first one to shoot there! The area is full of beautiful lakes, sprawling fields, and quaint towns. It’s an absolute creative fantasy! I was there for four days prior to the shoot making the sets with Philipp, and then the rest of the crew was there for five days so in total it was nine days of magical bliss! 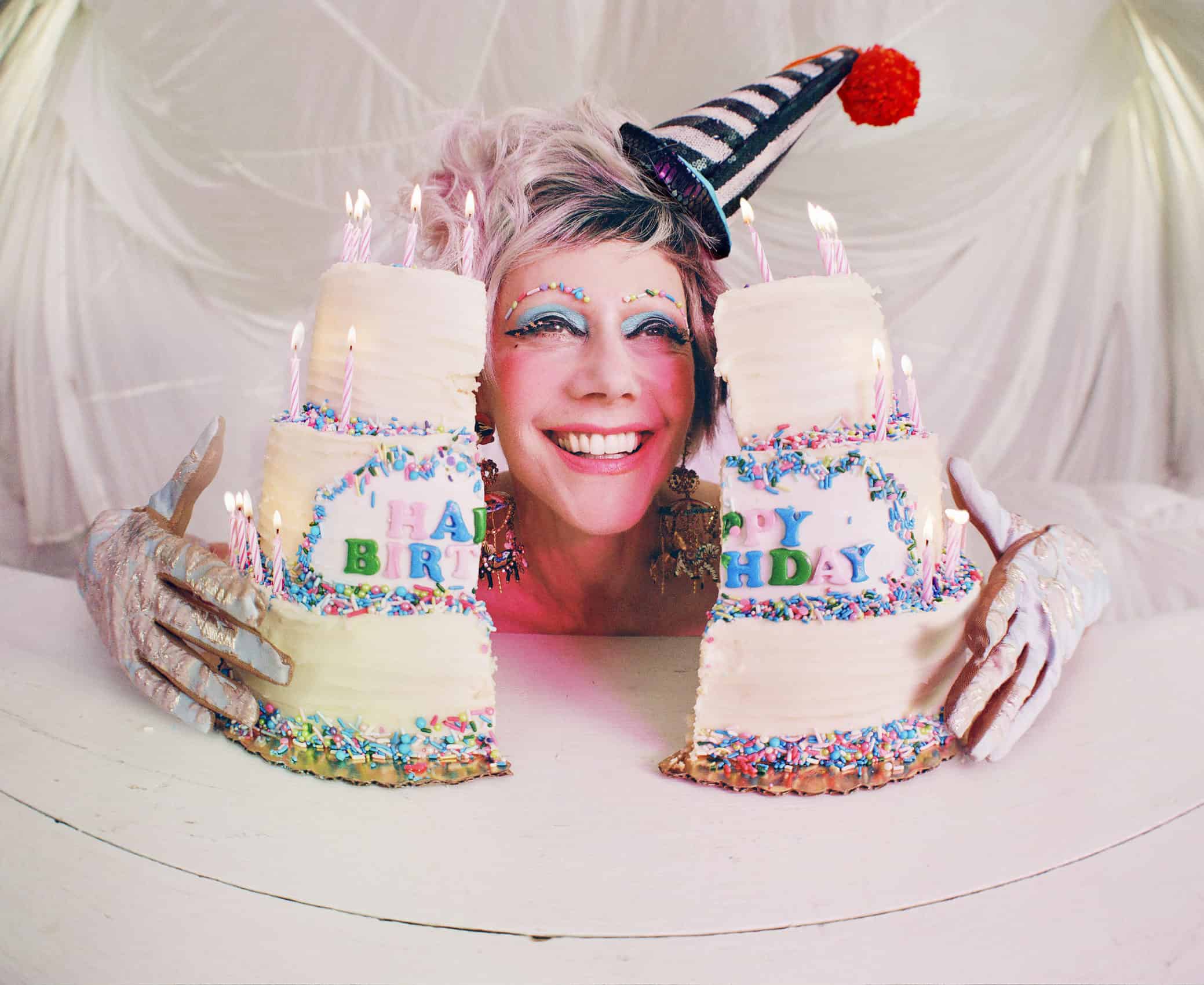 Do you have a favorite image from the shoot?
If I had to choose one it would be the one titled Close Your Eyes and Take a Journey Down the Calm Stream. You are the storybook, a fairy full of calm bliss. In this photo, Susanne is floating down the stream on a magical leaf [wearing designer] Wiederhoeft. It was a very blissful moment. We were all still, standing in the cool stream, listening to a mystical song on repeat. Susanne laid in the leaf and I could see her glossy eyes fill with slight tears as she reached a zen state. It’s a moment I will always hold close to my heart. 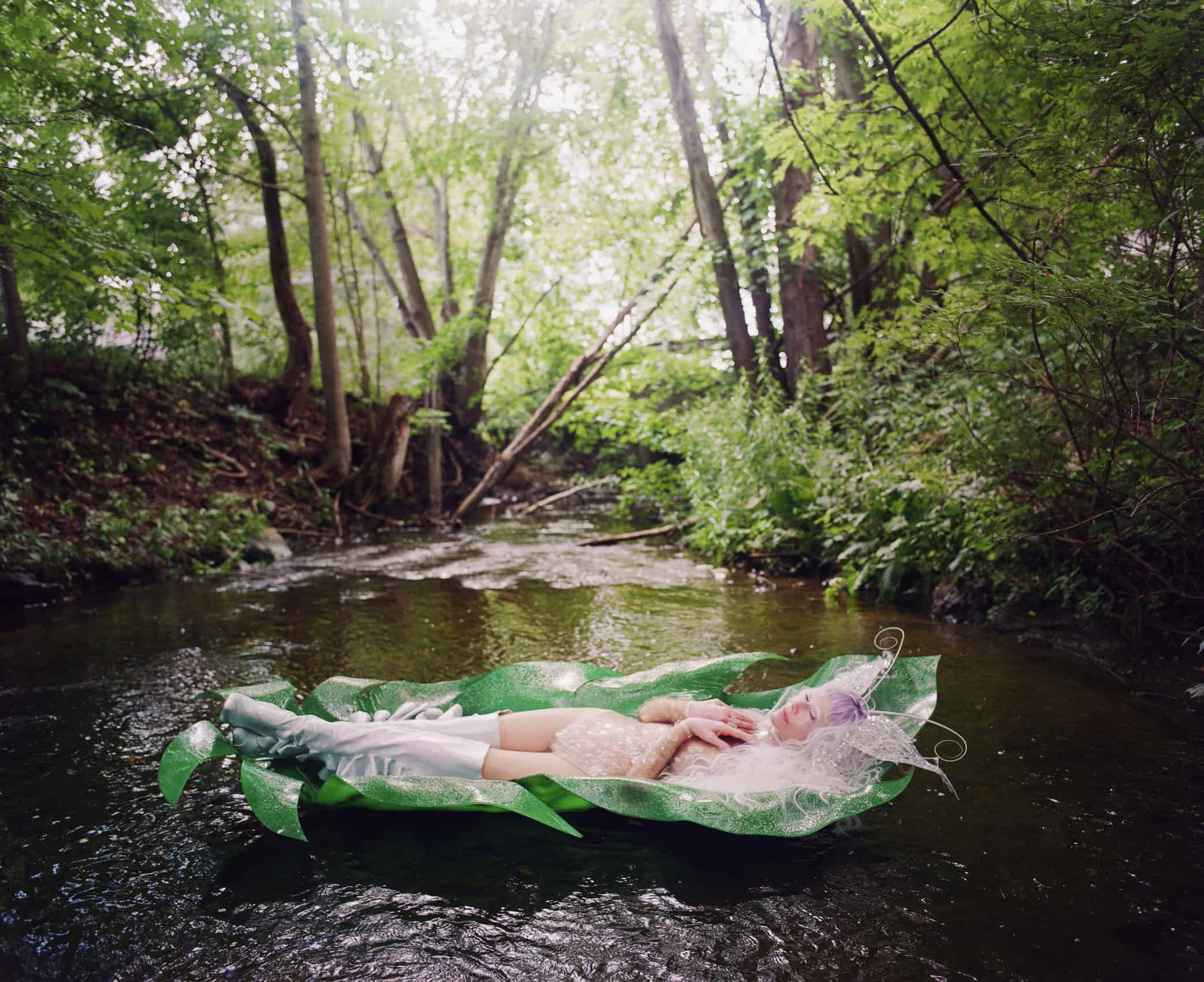 Susanne’s looks are incredible. Who designed them and how important were they in telling your story?
I completely agree! Susanne and Phil Gomez teamed up and knocked it out of the park! They pulled from emerging brands such as Wiederhoeft, Fecal Mater, Maison the Faux, Beate Karlsson, and Bradley Sharpe, to name a few. The looks were able to really push the emotion and allowed us to transcend into another universe. One of my favorite looks that helped push the narrative was by Bradley Sharpe. It was a skin tight white dress that flared at the bottom. The dress made Susanne appear out of space as the inkblot behind her looked like it had two massive aliens from the movie Predator lurking upon her!

Tell me a little bit about the creative team on this. Who were your collaborators?
Wow! Let me just say that I’m so grateful to have collaborated with such a talented group of creatives that I can call my friends! Philipp Haemmerle: a magical production designer who is an out-of-the-box thinker! He always pushes the envelope and comes up with the craziest ideas! We have a blast working together. I feel like we’re mad scientists whenever we get together. Elizabeth Kline Murphy was our kick ass producer who does everything with love and kindness. She knows how to get shit done! She feels like the mother on set and always sets the stage with love and a professionalism that makes everyone feel at home. She’s also my manager who I’m so grateful to have on my side! Phil Gomez and Susanne were such a special styling team, who really knew how to make every look fun! It was wonderful working with them. While they were loading the clothes, I felt like a kid in a candy shop. Alice Lane was the makeup artist and a spunky burst of sunshine. Her energy is electric! She is such a pro. Her makeup is flawless and she knows how to make very special moments that elevate the image. One key thing I feel she really brings to the table is how she comforts the talent and everyone else on set. Sean Bennet: a hair stylist who is truly a wild hair wizard. He’s an artist who is down to earth. I love his energy in that he loves what he does. Watching him make birds, sun flowers, and shapes out hair is mesmerizing! I love watching him work while he gets down and dirty. His hands are constantly changing colors from the hair dye. He doesn’t wear gloves, which I love! He likes to be one with his creations. Austin Goodwin and Paul Zivkovich: a beautiful couple who are wonderfully balanced movement directors. They bring a fun and lively energy to set! They really pushed the movement. As I shot, they were behind me giving Susanne inspiration on how to move. Having them on set brings a high level of fluidity and ease that is so key to making magic happen! And Ben Hunt and Bill Hilferty: a grip and gaffer who make the most beautiful lighting happen! They both work so hard and fast. We went through 26 lighting changes and shot in multiple locations. I loved watching them smile as Susanne would walk on set with her wild looks as the light set the mood for what was to come. 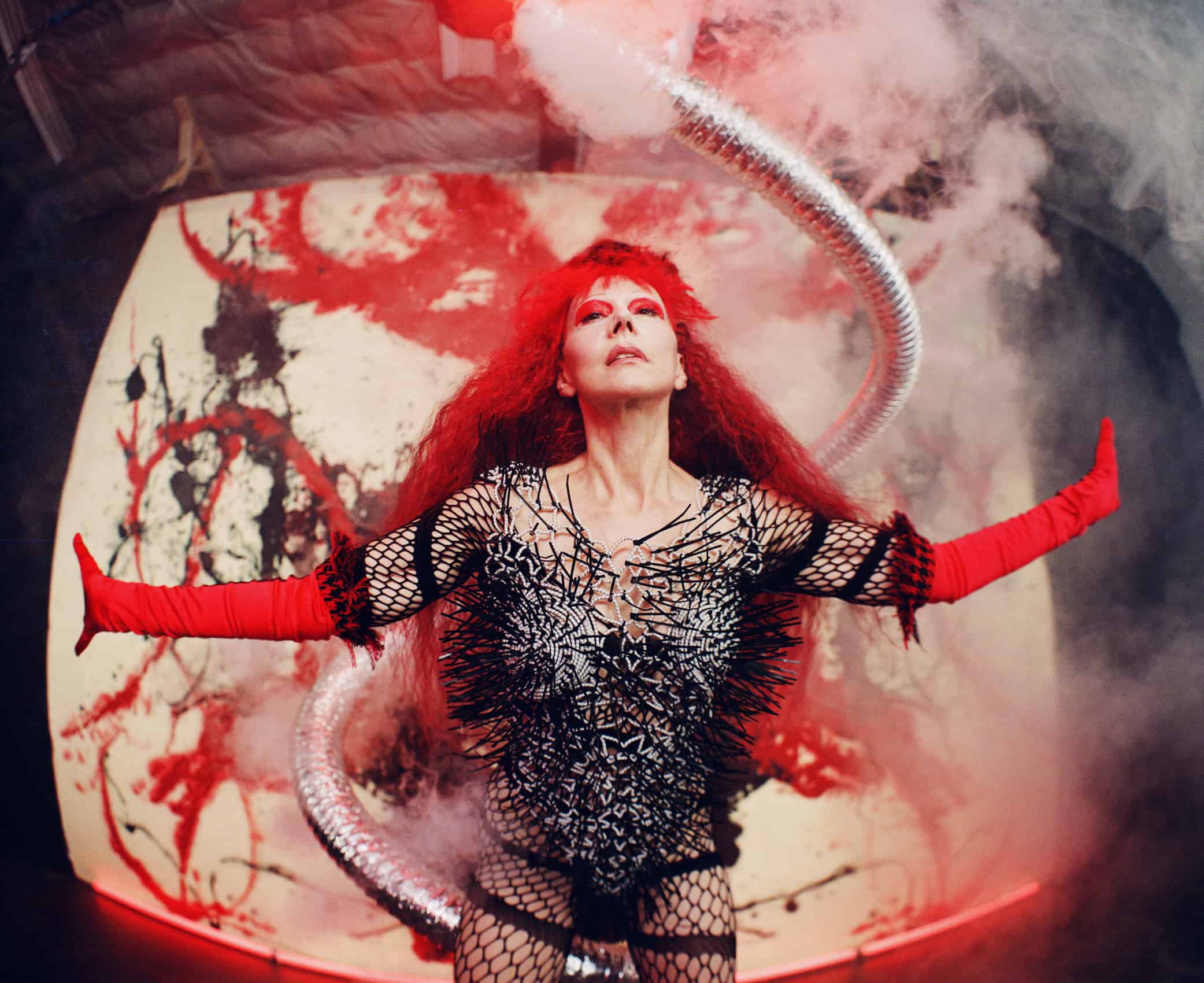 Watch a few moments from the shoot on YouTube:

All images courtesy of Jordan Millington

The NYFW Calendar Is Here! See All The Major Designers Showing This Season