Jennifer Lawrence Gets Personal With Vogue 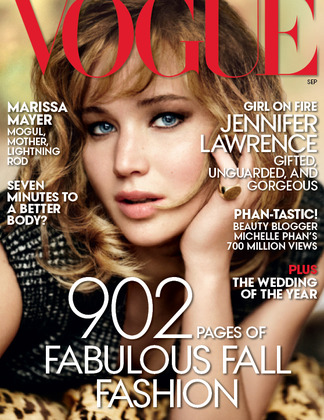 Jennifer Lawrence covers the September issue of Vogue and had a boozy ol’ time with writer Jonathan Van Meter for the feature. The seven-hour interview conducted at The Odeon brought out some interesting tidbits about the Hunger Games actress, including that she had a crappy childhood. “I was a weirdo,” she says. “I wasn’t picked on or anything. And I wasn’t smarter than the other kids; that’s not why I didn’t fit in. I’ve always just had this weird anxiety. I hated recess. I didn’t like field trips. Parties really stressed me out. And,” she adds, “I had a very different sense of humor.” Van Meter discovers she’s still coping with the downside of fame and has her own way of feeling like a regular part of the crowd. “Right now I’m just a big fan of windows,” she says. “I stand at my window at my hotel in Montreal. Like it will be hours. It’s the only time I can look at big groups of people, and they’re not looking at me.”

InStyle Touts Their Biggest Issue Ever!!

Mademoiselle C Is On The Way