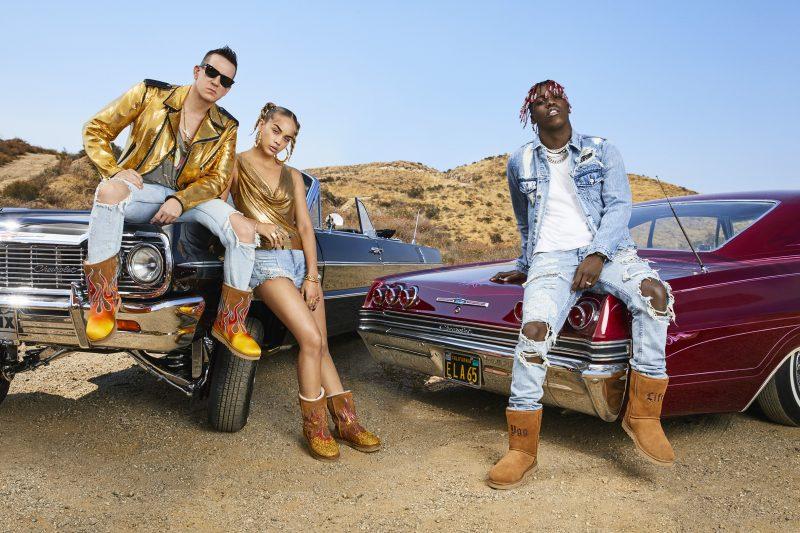 The Jeremy Scott x Ugg collaboration is here! The Deckers brand just released a new ad campaign for the partnership—which amps up the boots’ chic-quotient—starring Lil Yachty, Jasmine Sanders, and the designer himself, who pose on vintage cars outside Los Angeles in shots by photographer Marcus Mam and styled by Oscar-nominated costume designer Arianne Phillips. The limited-edition collection pays homage to California’s spirit and Los Angeles’ pop-culture over the ages—styles include the Classic Short Jewel boot featuring Ugg-heritage materials with Scott’s signature flair (think hand-sewn beads and jeweled hardware), the Classic Short Crystal Flames and Classic Short Flames, the first featuring Scott’s signature use of flames in fiery red and yellow Swarovski crystals and the latter with an embroidered applique on a soft suede canvas.

In the images, the trio wear custom looks designed by Scott that complement the footwear styles featured in the images. “I absolutely love Jeremy Scott,” said Sanders. “To be able to work with him and rock these cool UGG Classic boots and fun outfits is very exciting!” As for Yachty’s take on working with the brands? “UGG is a part of my everyday life,” he said. “So it was dope to be able to partner up with the brand because I use the brand.”

The collection, which features UGG footwear styles for men, women, kids and babies, will be available in an exclusive distribution worldwide with prices ranging from $90 to $1,195.