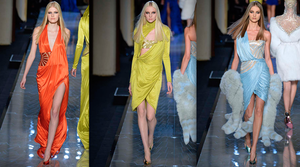 (NEW YORK) Atelier Versace
With a nod to Grace Jones, Atelier Versace kicked off Spring 2014 couture week with lots and lots of glamour. The first look, a silk suit and a crystal embroidered skirt in noir, was finished off with an attached hood that echoed a look synonymous with Jones in the Eighties. The hood also made an appearance on a sheer black jumpsuit, a draped ball gown in acid green, and a cocktail dress covered in a maze of silver beading. At times, looks veered away from the most overtly sexy, overtly Versace of silhouettes, such as a cluster of large ball skirts. But the rest of the designs were on par with what we’ve come to expect from Donatella. Gowns were accented with nude tulle corsets, gussied up with artfully-placed crystals to emphasize tiny waists and curvy hips. Corsets made peek-a-boo appearances between the folds of silk Grecian-style drapes in a shocking palette that included orange, bright purple, and baby blue. Save for metallic pointy heels, accessories were comprised of sumptuous fur wraps, oversized knuckle-dusters, and bracelets that snaked from wrist to elbow. And the makeup? Decidedly inspired by Donatella’s signature look: long, polished locks with middle parts, dramatic smoky eyes, and nude lips akin to patent leather. Donatella may turn elsewhere for creative inspiration, but in the end, it all leads back to the designer herself!

Iggy Azalea Gets Into Fashion

Iggy Azalea Gets Into Fashion