Hats Off with Eugenia Kim 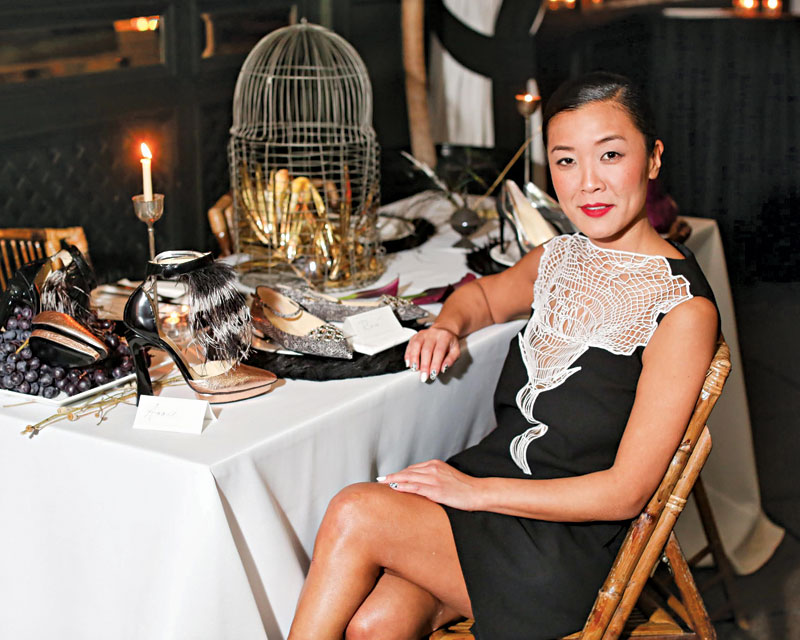 For those who doubt kismet, meet Eugenia Kim. The accomplished milliner began designing out of sheer necessity, and was discovered while wearing her creations as she paraded the streets of New York. Here, she shares how it all began and what’s in store for the future.

You initially thought you wanted to be a doctor. Tell us more!
I come from a family of doctors, and grew up thinking I wanted to be one. Freshman year in college, I was sledding on a cafeteria tray on the campus golf course and broke my back. I was in the hospital for a month, and it was really depressing. After that incident, I lost some desire to go into medicine. I minored in creative writing, and got my first job at Allure as an editorial assistant. The magazine paid for me to take a hat design class at Parsons, and the rest is history!
How did you get your start designing?
One night I decided to cut my own hair. It was really screwed up and jagged, and I had to shave my head. As winter neared, and I came to realize that I looked more like the Dalai Lama than Sinéad O’Connor, I ended up designing a feathered hat to keep my head warm and to give the illusion of hair. Walking around downtown, store owners took notice, and I began selling in a couple of boutiques. Soon after, I received my first order from Barneys New York. Stylists started pulling my hats for shoots and asked me to design hats for W and for David LaChapelle.
So do you consider yourself a daredevil?
The sledding incident was symptomatic of my young fearlessness. I was always pushing the envelope and taking risks. I was rebellious and didn’t listen to anyone…I was the only student that was consistently in all the AP classes and in detention. I guess I was meant to have my own company because it allows me to not have to answer to anyone but myself.
What inspired your Spring 2016 collection?
MoMa’s recent exhibit, “Henri Matisse: The Cut-Outs,” which showcased the artist’s later works. We were really attracted to the way he created abstract shapes of leaves and algae using hard-edge precision with scissors and paper. We designed the hats with the same notion of simplicity and ease. This similar idea has also been translated in the trims and embellishments. For example, the Courtney wide-brim fedora features a loose knot hand-painted band. The vibrant colors are representative of Matisse’s art, specifically, his piece Large Composition with Masks.
Can you share a few tips for choosing the best hat to complement facial features?
It’s best to choose a hat that is a counterpoint to one’s features. Some examples: Round crowns soften angular faces, fedora crowns add angles to round faces, and wide brims counter long “Bert” faces and also slim down wide “Ernie” faces
Great tips! Tell us about the celebrities you’ve seen wearing your hats.
We’ve worked with Beyoncé and Madonna to design custom styles for their tours. Other celebrity fans are Lady Gaga, Sarah Jessica Parker, Jared Leto…and the list goes on!
Impressive list—can you tell us about your earliest memory of fashion?
I’m a child of the ’80s, and fashion was highly influenced by the music of the time, like Madonna with her lace and DIY outfits. I remember going to my first Madonna concert at 11 dressed head-to-toe in full Madonna gear, and I even appeared at the beginning of her “Dress You Up” video before MTV edited out all the pre-show footage. I still can’t believe she is a regular Eugenia Kim wearer now! I have been designing her tour hats for almost 15 years.
What is your design process like?
It’s pretty organic. We usually start with a mishmash of different inspirations, then shapes and materials, then sampling, and all of a sudden, all these amazing hats appear almost overnight. We do a lot of experimenting with techniques to create newness. My mind works in Excel and chart format so we create these visual Excels to outline the collection as well.
Tell us about your shoe designs!
The shoe collection has evolved from the time I launched in 2003. Back then, the shoes were whimsical but literal. This time around, the shoes are made with luxurious materials, have clean lines, are based on exciting ideas, and are different from what’s out in the market. I find that newer shoe designers tend to “trick out” their shoes, so you essentially can only wear those designs if you are Tommy Ton bait. As with my hats, I am focusing on wearable yet striking shoes that are decidedly left of center.
What has been your favorite show moment?
I don’t get starstruck easily. However, for one collection, I designed an ’80s-style multi-bow hair accessory inspired by Saved by the Bell’s Kelly Kapowski the night before the show. Appropriately, I named it Kelly. The first day of the show, in walks the Tiffani-Amber Thiessen, and I freaked out like a crazy fan, and asked her to take photos with me. She asked to do personals. Obviously, I said yes!

Publicists In Crisis! What They Really Think About Vous!