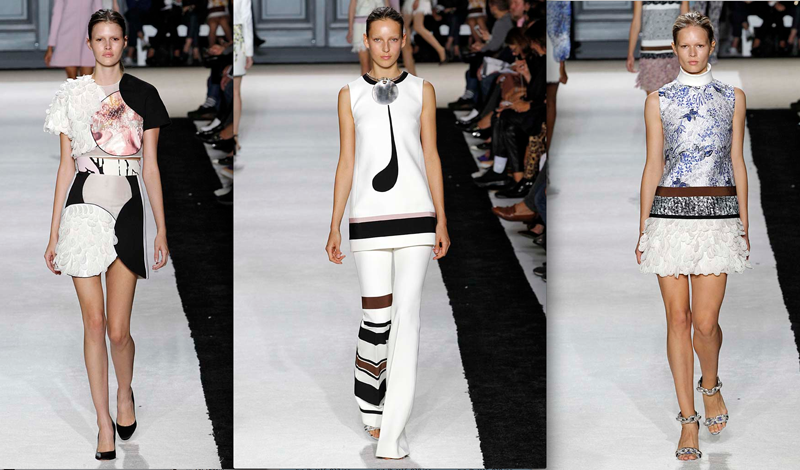 Fresh off the debut of Giamba, a spin-off of his namesake line, in Milan last week, Giambattista Valli carried over a bit of that youthful spirit for the Spring showing of his main collection in Paris. As different as the collections were in some respects, there was a certain sense of innocence found in both showings. Here, the pieces were crisp and fuss-free, which is quite a feat considering the overt use of fringe, floral prints, and scalloped hems. Stark white separates were brilliant, like a pair of snowy-hued flares a brown stripe at the thigh, which lent a ’60s vibe when paired with a tunic top. In addition to using the era as a point of reference, the designer also looked towards Japanese motifs for inspiration. There was something kind of romantic about pieces like a graphic tank dress dotted with oversized circles.  Throughout the collection, Valli proved his astute ability to create (and often mix) prints, which were mostly culled from a floral shop: cherry blossoms, pussy willows, daisies, and orchids. He even hit notes of the Far East, with a blue china pattern finding its way onto a turtleneck dress with an appliqué-embellished skirt. Sophisticated without a hint of stuffiness for Valli’s girls.