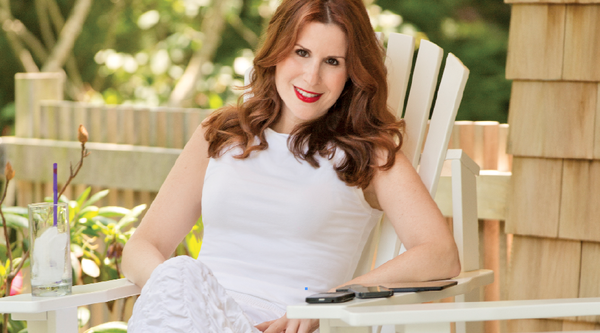 How long have you been coming to the Hamptons?
Since I was little, but we always stayed in hotels.

What are your go-to spots?
My own backyard because I normally don’t have one. But everyone’s priority out here is the gym. I’ve been going to Core Fusion every single day, can’t you tell? Just kidding!

Is it a scene?
The Golden Pear where I get my coffee across the street is a scene. Core Fusion isn’t yet. SoulCycle is a scene, but I don’t do that. But Golden Pear is just insane. Everyone is in gym clothes and dripping wet, and it’s me and Molly Sims and all these people from work and we’re all disgusting. Where else can you go where it’s socially acceptable to be soaked with sweat?

Do you like to shop when you’re out here?
You know, Kmart is actually an amazing experience in the Hamptons. The Kmart PR people should promote it more because I feel like no matter who they are, people go to Kmart in the Hamptons because there are so few places to shop.

Where else do you like to go?
Montauk Beach House, which is members-only and kind of like Soho House. It just opened last summer and it’s definitely a cool place to be. I really like Gabby’s and Tutto Il Giorno, too. They always have great food and a great scene.

What’s your favorite Hamptons memory?
Super Saturday every year is awesome. In 15 years I don’t think I’ve missed one. I started at Harper’s Bazaar as an intern and the event really reminds me of where I started. It’s like worlds colliding. Also, just driving out here years ago, my husband, David, was my boyfriend at the time and we took my parent’s convertible and I was like, “Don’t you want to do this one day?” and he was like, “No, never!” Well guess what? We’re doing it. Other than that, I think that no matter how much of a workaholic you are if you come to the Hamptons you have to relax. Sometimes, I’m like, “Do I have a pulse?”

You have two phones. Your BlackBerry is for work. Is the iPhone for personal stuff?
There is no personal. There’s a total blurring of that. The iPhone is Instagram, Tumblr, Pinterest, Weibo, and Twitter.

How did you get into Weibo, the Chinese microblogging service?
We have a huge business in China, but really Tina Craig from Bag Snob told me to do it. I write in English, but sometimes the responses come back in Chinese and you’re like, “Hope that was positive!” I do it the same frequency that I do Twitter. When we were in London, DKNY hosted a party, and every single thing that happened at that party I posted. Everyone was working and once the red carpet was over everyone went off to go party, but not me! I did Twitter, Weibo, Instagram, Facebook, Vine, and Tumblr. I did all individual posts.

How do you have time to do all of that and be the SVP of Global Communications?
I’m a Gemini. That’s the only answer. I also have two monitors at work.

You don’t even have assistants helping you Tweet or anything?
Nope. I started early and it was always me, so I feel I still need the credibility of it always being me. Also, I’m allergic to scheduling. It’s important to be in real time, with real emotion, especially when world news happens. I’ll never forget, when Osama Bin Laden was killed and some magazines were tweeting, “The Top 10 Lip Glosses for Summer!”

Is Twitter still your biggest audience?
Whosay is actually bigger than Twitter. My following on Whosay is 700,071.

What’s Whosay?
Whosay is an invite-only social network. It’s really for the Tom Cruises of the world and they let in people like me if you have a specific following. It’s good for celebrities because they have a deal with the AP. So, let’s say Tom Cruise posted a photo of Suri on Halloween, the AP can buy that photo and use it. It’s a way for celebrities to make money from pap photos.

Are you big on Vine?
I think I have, like, five Vine followers. It’s interesting, because Instagram just came out with video. Everyone on Vine was having a fit. People need to relax! This is not the invention of video. Look at these…trees! Do you guys have trees? I have trees! Literally that’s what people are posting.

Do you remember when you started getting attention for all this stuff?
It was bad attention at first. People love to tell you what to do. Originally, it was supposed to be a character. Every Friday night I would say to the girls, “Okay who has the best plans for Saturday night? Let’s make our girl go there!” She was, like, a dress-up doll, but then I was on the platform so much I started just being myself anonymously. I remember a major editor emailed Patti Cohen and was like, “I just have to tell you that I’m horrified that a brand like Donna Karan would let someone put out their personal life like this on behalf of a brand.” It was horrible! But I had been there 15 years and they trusted me.

Where is this editor now?
Running social media for another retailer [laughs].

Were you Tweeting before you launched the @DKNY account?
No, I didn’t even have a personal account until last year.

This is like a second job for you. Do you ever look back and think, “What did I get myself into?”
You know what, I’m so passionate about it that I never feel like it’s a burden. Like, I could do without checking my email for days, but I could never not check Twitter.

What happened when you revealed yourself on YouTube?
It was two years of anonymity, which was super annoying because industry people started to know. Patti and I discussed it and felt that people knew me so well from the Tweets that I didn’t need to be behind the veil anymore.

What was the response?
That day we were taking my son to see a camp and we went upstate and I tweeted the YouTube link and then lost reception for four hours and when we got back to the car and found reception my phone blew up. But thankfully, it was a warm reception.

Is it more or less fun now that you’re out of the closet?
I still have my normal everyday day job. The difference is that in the beginning it was almost embarrassing to be Tweeting and I would do it under the table. My husband thought it was a joke. He’d be like, “Oh are you talking to your fake friends again?” and I’d be like, “They’re real people!” I love that it has become legitimate. I felt like I was in the wild West by myself.

What do you think fashion reps could do better on Twitter?
You have to be true to what your brand is. Some people can have their CEO or designers Tweet and they do an amazing job! Others, we clearly have seen, can’t. In general, if you are a very buttoned-up brand then you probably shouldn’t have a Twitter like DKNY Girl. That persona has always been the pizza to Donna Karan’s caviar and that has always been the juxtaposition of the brand. At DKNY, we have fun with it so why wouldn’t I have fun with the Twitter account?

What do you think is the next big thing in social media?
I would have to say real-time chatting, almost like Skype or Google hangouts. But I’m too vain to do it! If you want to get really down on yourself go take a look at yourself on FaceTime. You’ll need therapy. But the Busco Booth (digital photo booth) has the most flattering light ever! You’re literally airbrushed. And there’s Freecast, which is like The Brady Bunch. You put up the four squares of people and all of the heads can see each other and talk to each other. People can even Tweet in questions!

Will you freak out when your kids start doing social media?
They are already! My 8-year-old son has a blog called CarStory about luxury cars. He does it all by himself. He goes around the Hamptons with his iTouch and takes pictures of all the cars in the Hamptons.

How many followers does he have?
The other day he was like, “Mommy, why do you have so many followers and I only have 25?” So I tell people to follow him. My daughter blogged for Tina Craig’s Tot Snob. I pulled up this $40,000 play house on the internet and I asked her what she thought about it. I typed up exactly what she said. She was like, “Well I don’t know if I want to play in there. I don’t know if there are toys in there because I only see the outside of the house.” Basically, she’s been blogging since age four.