From The Daily Summer: Coveted Croc By Nancy Gonzalez 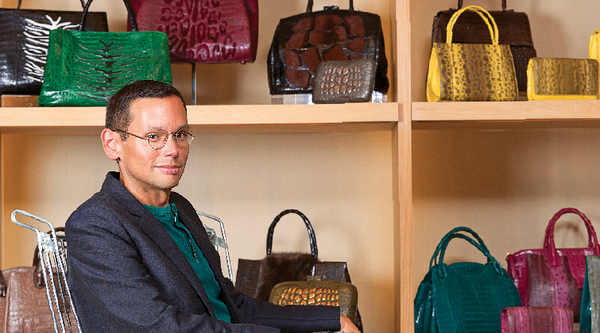 (NEW YORK) Santiago Barberi Gonzalez, son of Colombian handbag designer Nancy Gonzalez and president of their family-run business, breaks it down about their coveted exotic skin handbags, his extensive high-brow art collection, and what it’s like being one of the few internationally visible Latin American luxury brands on the market.
BY PAIGE REDDINGER

Your mom launched in 1998 at Bergdorf’s. Was she selling anywhere else outside the US before then?
I founded the company with her in 1998. She was in Colombia in 1988 and had just been divorced, her children were going to boarding school, and she wanted something to do. She was always one of the best-dressed women in Latin America and so she decided to make handbags. Of course, she was looking for the best material, and it happened to be crocodile. Today she can cover 57 links of chain in exotic skin. Nobody else in the world can do that.

How did you bring the line to the US?
She had seven stores in Colombia and it got very dangerous for us then and in 1998 we had the fortune of showing the line to Bergdorf Goodman, who bought it immediately and made a small order for resort. When they placed it in the store, the entire order sold in four hours.

In four hours?
Yes, and Bergdorf’s called me back and I went in and they said to me, “We need to make a reorder.” I was in college and just 22-years-old.

Where were you in college?
I had a degree from Babson College and I had just started a second degree at Savannah College of Art and Design. They said, “We’re going to put you on the cover of the catalog and we’ve made you an appointment with our parent company Neiman Marcus.” For three years I only had two clients, but they were Neiman’s and Bergdorf’s.

Where do you get the skins from?
I have tanneries of my own all over the world. I also purchase skins from many people since my tanner is are not enough for the amount of bags I make.

So, what’s it like dealing with customs?
It’s not about customs, it’s about Fish and Wildlife. They love us. They know me by name.

How big is the current collection?
We present three collections a year of 150 new styles. For Fall, we created these animals that didn’t exist like croco-leopard. It’s impossible to do. We cut by laser the belly of a crocodile into a leopard print and push pony hair through it. You have to be a master at using skins to do this.

How much is that bag?
$3,500. We wanted to sell it. We did crocodile zebra, which is already sold out, and only two left in Neiman’s. It’s black crocodile skin cut like a zebra with white crocodile pushed through. We delivered them in May.

How would you describe the customer?
My customer doesn’t need to be validated by the brand, they validate the brand.

You have an extensive art collection. Does it inform your work?
Absolutely. I’m having a great time doing advertising campaigns. The campaigns are like art. We shot our recent ad by hanging the bags on 24-karat gold horns. The idea was that after the hunt you hang the trophies.

What is your art collection like?
It’s conceptual with artists like Lawrence Weiner, John McCracken, and Louise Lawler. Once I had a very sophisticated Swiss art dealer come to my house and she said to me, “If I didn’t know this was your house I would think it was owned by a wealthy Belgian woman.” I said I’d take it as a compliment because they are very elegant.

Would you ever do a collaboration?
I did the most beautiful one. Lawrence Weiner, Jenny Holzer, KAWS, Jim Hodges, Raqib Shaw, Dr Lakra, Richard Phillips, Mickalene Thomas, Josephine Meckseper, and Will Cotton made one-of-a-kind customized bags that were auctioned off for amfAR and raised over $300,000.

Was it hard letting the bags go?
I wanted to buy them all, but they wouldn’t let me! They said to me it would look like a publicity stunt. I was so upset. But the important thing is we raised money for charity.

Pinterest Has A Whole New Look For Fashion Week

Ken Downing Gives His Take on the...

The Daily Roundup: Willow Smith on Her...