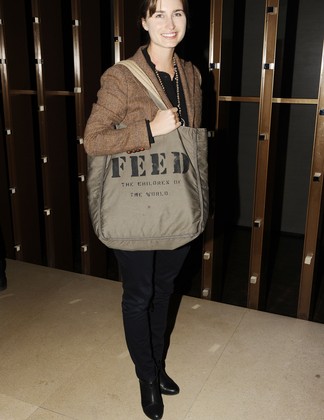 (NEW YORK) Target’s next target on its collab docket? A decidedly philanthropic, instead of designer-oriented, route. FEED USA + Target is bowing at the big-box retailer on June 30, the specially-designed goods from Lauren Bush Lauren’s org will be available both in the retailer’s brick-and-mortar locations and online.

A portion of the proceeds from the 50-piece collection will benefit Feeding America—and each item, priced from $3 to $400, will be labeled with the number of meals donated through the purchase. More precisely, 10 percent of the original pre-tax retail price will go to Feeding America. The ultimate goal, donation-wise, for the collab? “Through product sales, we hope to provide 10 million meals to Americans in need, which would make it the largest U.S. initiative in FEED’s history,” said Lauren in a statement. Each dollar equates to eight meals through food banks, via Feeding America.

As for the do-good goods: Expect an Americana theme, and a far wider array of items than the totes FEED first put its stamp on back in 2006. In addition to apparel and accessories, the collection will include home goods, sporting equipment, and even stationary.

While Target’s design collabs have tended towards fashion designers, of both the established and buzzy emerging varieties, the Minneapolis-based retailer recently opted for a stylist, Kate Young, in lieu of another designer. FEED’s Target output is slated to remain in stores through late November.
ALEXANDRA ILYASHOV