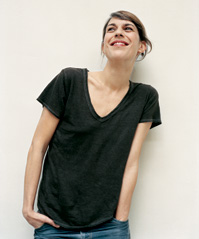 Isabel Marant has long been a cult fave among the street style-saavy set, but business is booming and her strain of laidback cool has long gone mainstream. Case in point? Those wedge sneakers that are popping up all over the streets: They might not all be Marant’s, but they’re certainly all Marant-inspired. And she’s not exactly happy about it, according to The Telegraph: “‘Everybody who has the wrong one looks quite bitchy, very vulgar, when mine are not at all,” she says. She later adds, “As soon as you have an idea it’s copied and you don’t like it in a minute.” Très Français, non?

Rihanna Ramps Up For Her World Tour: Hello, Riccardo!