Stefano Gabbana and Domenico Dolce revealed in an interview with Italian magazine Panorama that they oppose gay adoption, which infuriated Elton John and his husband David Furnish (along with many others) over the weekend. “We oppose gay adoption,” the designers (formerly a couple) said in the interview. “The only family is the traditional one. No chemical offsprings and rented uterus: life has a natural flow, there are things that should not be changed,” the designers said. Dolce said that procreation “must be an act of love”, adding, “You are born to a mother and a father–or at least that’s how it should be. “I call children of chemistry, synthetic children. Rented uterus, semen chosen from a catalog.” Gabbana added: “The family is not a fad. In it there is a supernatural sense of belonging.”

Yesterday, Dolce responded to critics on his views, saying he was expressing his thoughts about family based on his experience growing up in a traditional Sicilian family, comprised of a mother, a father, and children. “I am very well aware of the fact that there are other types of families and they are as legitimate as the one I’ve known.’” Dolce said he was expressing his personal views “without judging other people’s choices.”

Elton John, who is the parent of two boys born via surrogate, made a statement via Instagram: “How dare you refer to my beautiful children as ‘synthetic’. And shame on you for wagging your judgmental little fingers at IVF – a miracle that has allowed legions of loving people, both straight and gay, to fulfill their dream of having children. Your archaic thinking is out of step with the times, just like your fashions. I shall never wear Dolce and Gabbana ever again. #BoycottDolceGabbana”

David Furnish followed Elton’s sentiment yesterday with his own post on Facebook: “Being able to have children is single-handedly the greatest joy Elton and I have ever experienced. I find Dolce and Gabbana referring to my sons as “synthetic” deeply offensive, bigoted, hurtful and divisive. We’re so lucky to live in an increasingly progressive world. A world based on freedom of choice and equality for all. So, I now choose to wear clothes created by people who embrace this new humanity and have relegated my Dolce and Gabbana pieces to the rubbish bin. I encourage others to do the same. #‎BoycottDolceGabbana“

Dolce yesterday responded to John, Furnish, and many others who disagree, saying, “I am very well aware of the fact that there are other types of families and they are as legitimate as the ones I’ve known.”

Clearly not bowing down from their statements, Gabbana also took the feud to Instagram (which is really where photos should be shared, and not used as a forum for PR responses, right?) and defended himself through positive comments from followers with a whopping and defensive 40 posts defending their words, but still included the #boycottdolceandgabbana hashtag on many. Gabbana also commented on Elton John’s Insta feed that he considers the legendary artist a fascist with a call for “#boycotttteltonjhon.” (Gabbana shouldn’t enter any spelling bees)

Elton John and David Furnish weren’t the only ones that chimed in on this. Victoria Beckham, Ricky Martin, and Courtney Love also took to social media to respond, with the latter writing: “I just round up all my Dolce & Gabbana items and want to burn them. I’m just beyond words and emotions. Boycott senseless bigotry! ‪#‎boycottD‬&G” 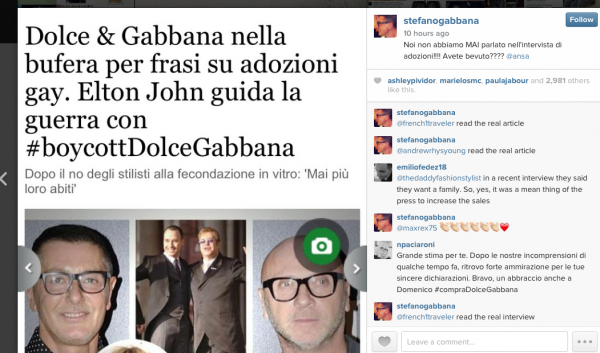 This is ridiculous. We live in a time where there is freedom of speech. It was an opinion that was put forward, without judgement against anyone else’s beliefs or anyone else’s family/family values. Why does social media turn so hateful with boycott hashtags and burning
of clothing, when someone puts forward an opinion which happens to be different from yours. I could write a whole hate hashtag campaign about people who burn clothing when there are people out there without anything to wear and no food on their table. We need to live in a world where we are not judgmental and for sure we are not so spiteful.

Dolce & Gabanna – what were you thinking or clearly not thinking? How can you insult and alienate your fans and friends with such nonsense? This will be a tough one for you to recover from. Better hire a PR genius or make some serious donations to get you out of this mess. Your comment was very 1950’s. I’m shocked by your foolishness.

I agree with Madonna – think before you speak!