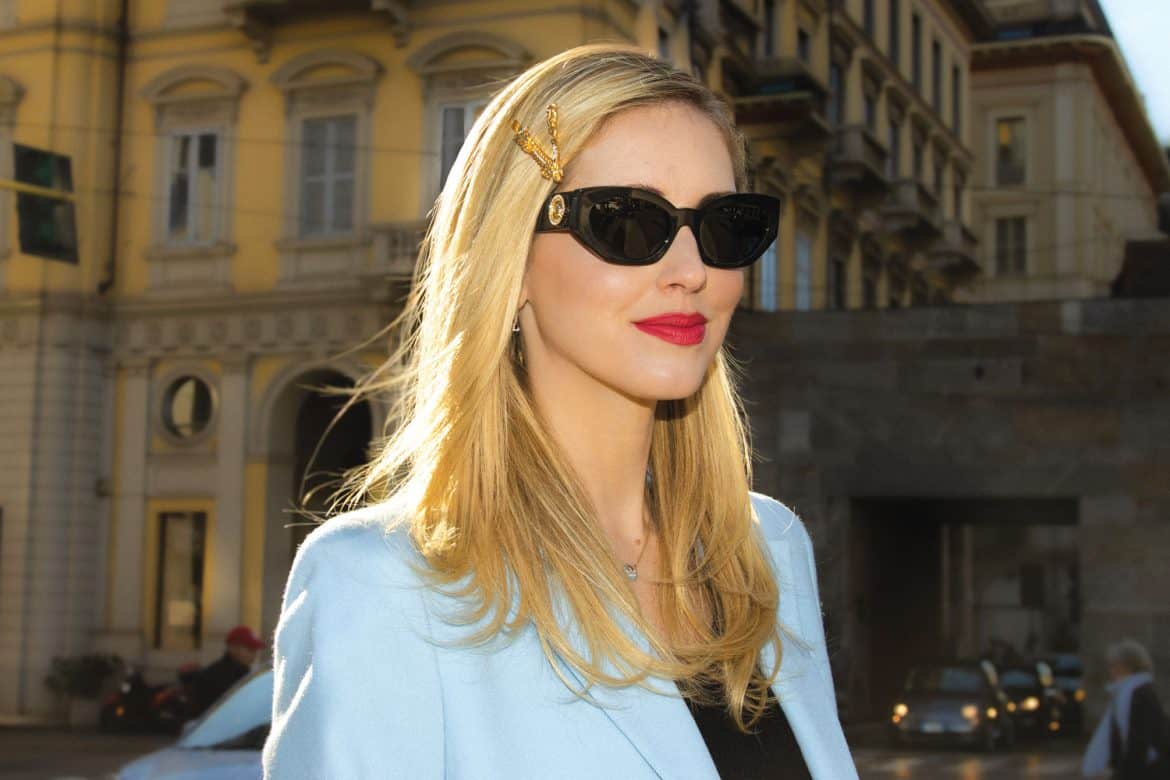 Oh, you thought the Alex Rodriguez & Jennifer Lopez news cycle was over? Think again! Just weeks after the high-profile couple split, the former baseball star reportedly escaped to the Hamptons for the summer. Page Six writes that A-Rod is now sitting pretty just a jog away from Lopez’s 8,500 sq. ft. Water Mill mansion—in a $5 million Bridgehampton rental of his own. The property boasts an impressive list of selling points—including a heated pool and spa, seven bedrooms, 11 bathrooms, and nearly four acres of land with direct access to a pond. Oh, and a makeshift basketball court which he showed off via an Instagram post. Too close for comfort? You tell us.

Man Repeller founder Leandra Medine Cohen has announced a partnership with Closed, and a capsule collection set to release in October. The forthcoming collection will comprise of just six pieces—including a jacket, denim shirt, and basic jeans—which will retail between $215 and $640. The duo will donate a percentage of the sales to a selected charitable organization, though it has yet to be disclosed. Come October, the offering will be available for purchase on closed.com and selected global retailers.

Chiara Ferragni expands her global empire to watches and jewelry

Global influencer Chiara Ferragni is expanding her offering with the launch of a namesake line of jewelry and watches. The entrepreneur and Milan-based style icon has signed a worldwide licensing agreement with Morellato Group, which will result in the inaugural distribution of her jewelry and watch collection, which is scheduled to debut in October. The bsuy mom-of-two also signed a five-year licensing agreement with Italian childrenswear line Monnalisa for a forthcoming collaboration on apparel for children ages 10 and under.

Balmain Festival V02 is a go!

The Balmain Music Festival is scheduled to run again on September 28-29, and will be wrapped up by the debut of the French house’s Spring Summer ’22 offering. The collection, which will debut amidst the festivities of Paris Fashion Week, will highlight the two-day music festival at the Seine Musicale in Paris. Also featured in the festival program will be a selection of music, drinks, food, and a limited-edition collection for the taking. The festival comes after the original Balmain Festival in 2019, for which creative director Olivier Rousteing took to a concert-like runway to present the house’s men’s collection. This year’s festival is free to attend on the first night, with a limited 1,200 spots on the second night in honor of the collection’s debut. For those lucky enough to be granted one of the 1,200 spots, a 15 euro minimum donation to (RED) and the Global Fund will be required in order to receive two tickets to the show. Donate here today! 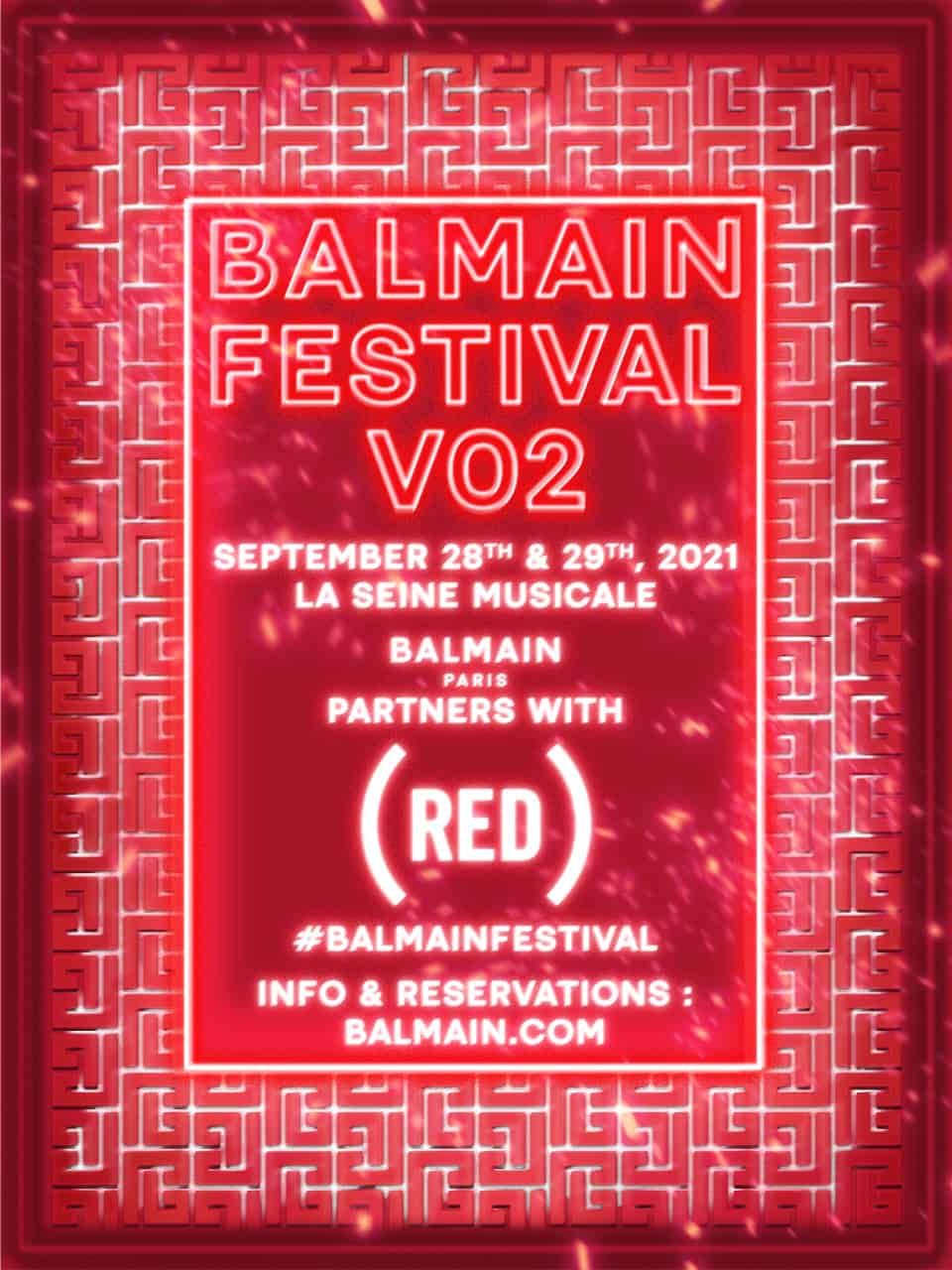 Gucci is no stranger to a song lyric—let alone 22,705 of them. For its 100th anniversary collection, Gucci will tune into its association with pop culture and focus on its long standing connection with the music industry… oh, and that number. The centennial collection, which has been teased via previews and press appointments during Milan Fashion Week, will feature “22,705” and the phrase “music is mine, Gucci seats reclined”—a homage to Eric B. & Rakim’s 1988 song “The R”—printed on a variety of pieces. The music-centered themed comes after creative director Alessandro Michele’s “Aria” collection debuted on the runway to a hip-hop soundtrack chock full of some of those 22,705 Gucci references—Lil Pump’s “Gucci Gang” and Bhad Bhabie’s “Gucci Flip Flops” included.

UGG and Telfar have teamed up once again for an all-gender offering of clothing, underwear, and (drumroll, please!) classic footwear merging each brand’s unique style. To celebrate the collab, the duo teamed up with the cast of The Real Housewives of Potomac, with the cast donning pieces from the collection, as well as signature Telfar pieces, for a spread in InStyle. Beginning in September, shoppers can expect additional drops of the ongoing collaboration—just in time for cooler temperatures and much-needed cozying up by a fire! 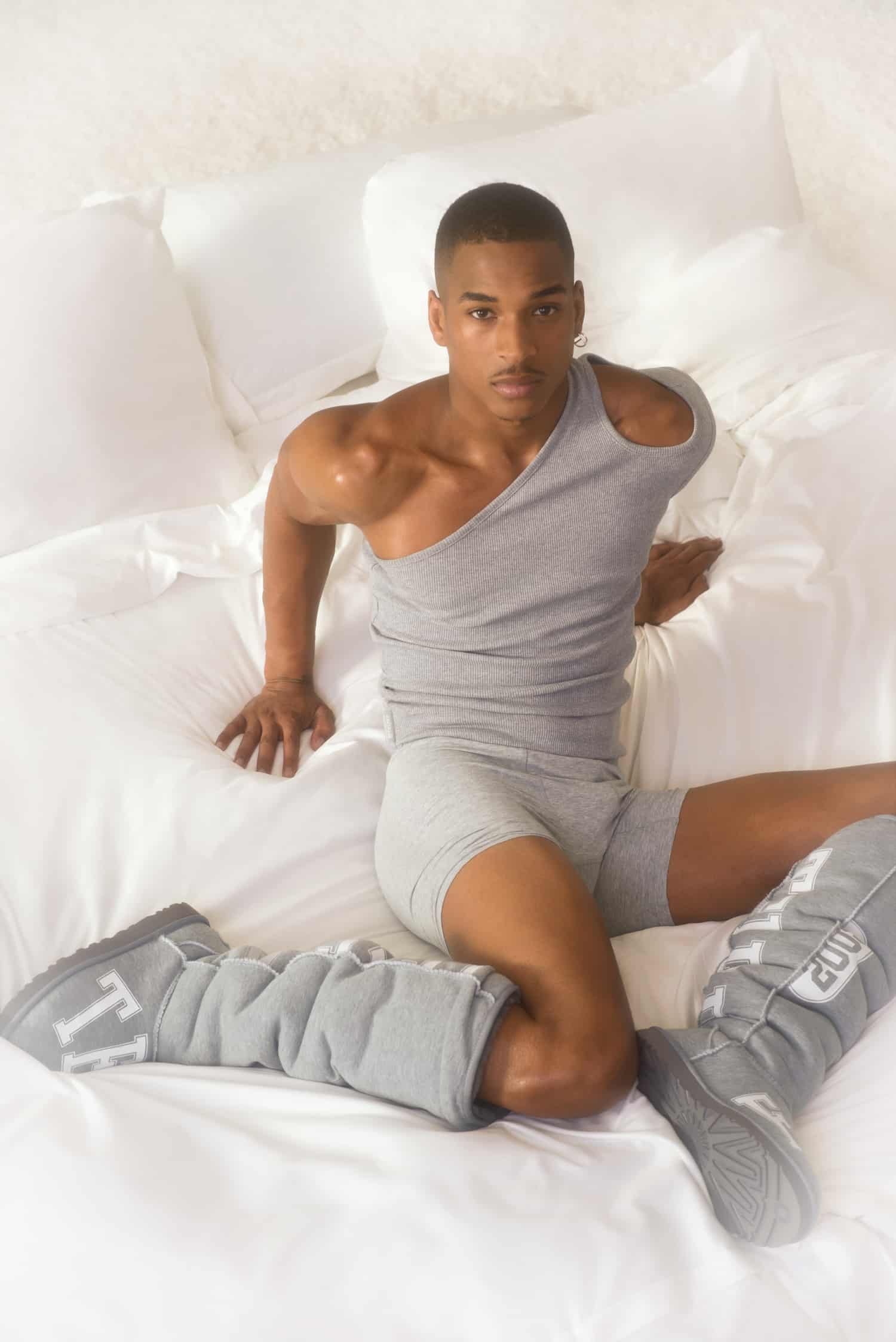 For her Fall Winter ’21 collection, London-based luxury loungewear designer Olivia von Halle wanted pieces that exude luxury, both in appearance and feeling—and her latest offering, named “The Divine Nile,” does just that. The collection, which pulls inspiration from hieroglyphs, Ancient Egyptian royalty, and Cleopatra, boasts silky sets, breathable cotton pieces, and printed robes, sleep masks, scarves, and more that surely are fit for a queen. 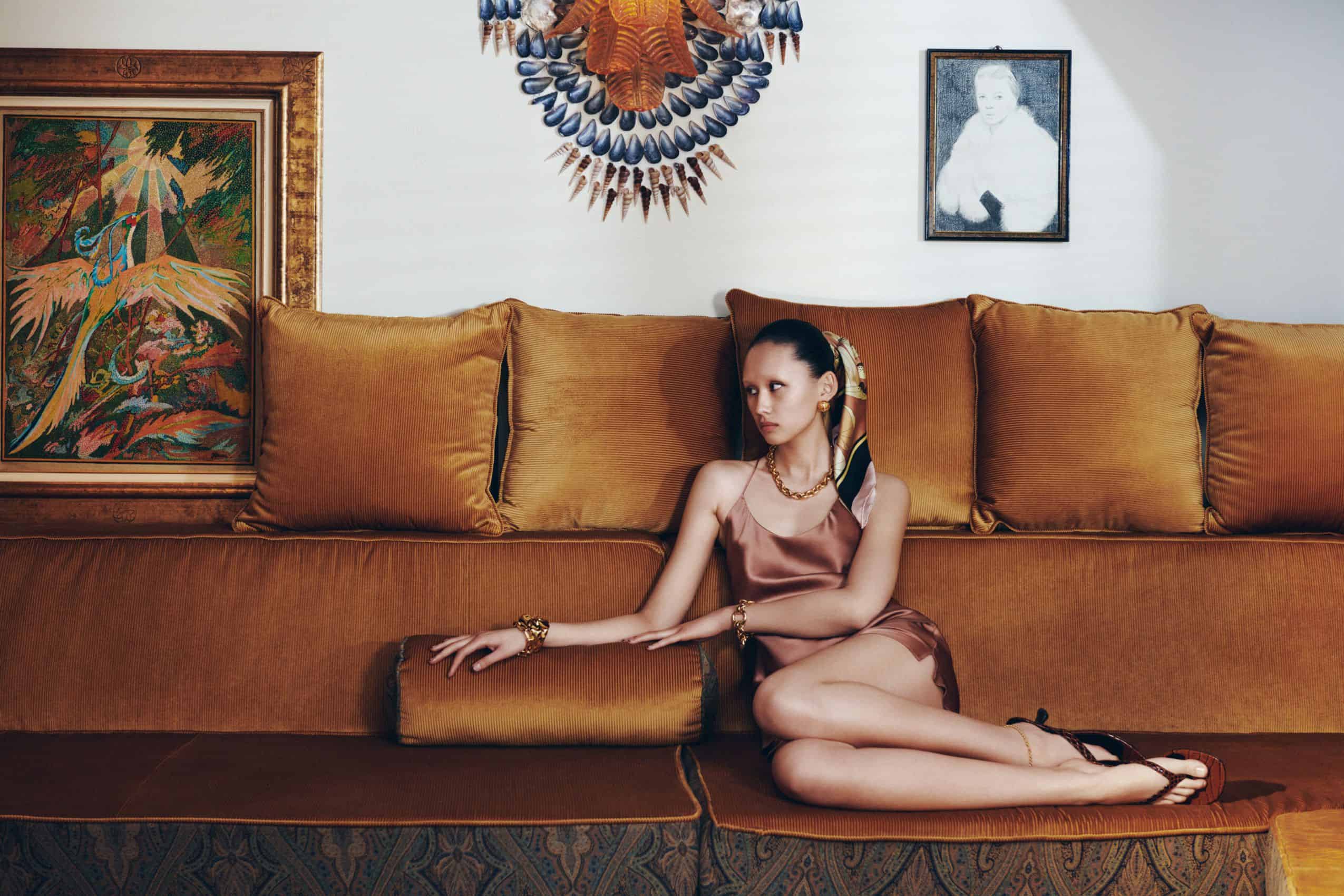 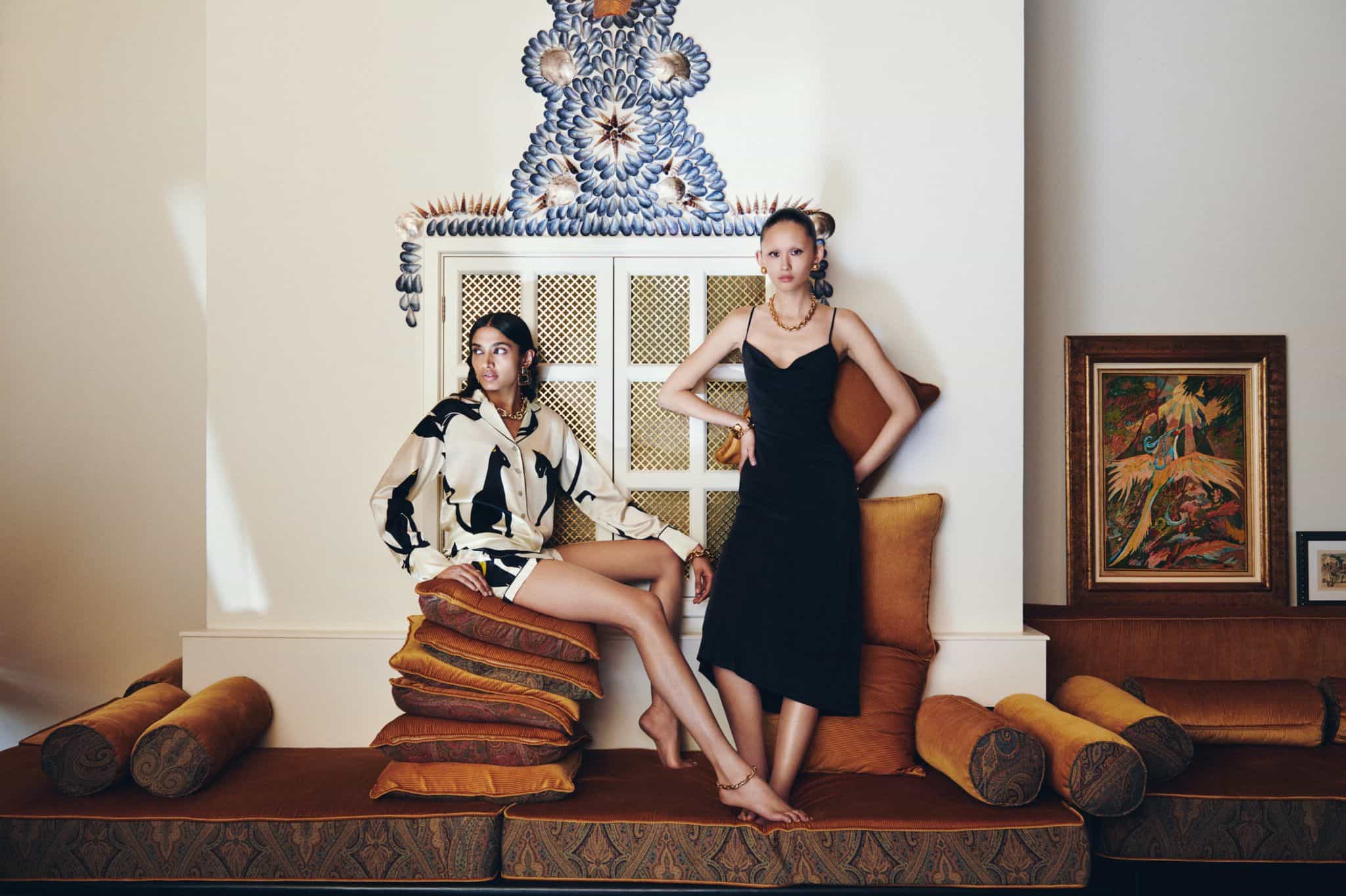 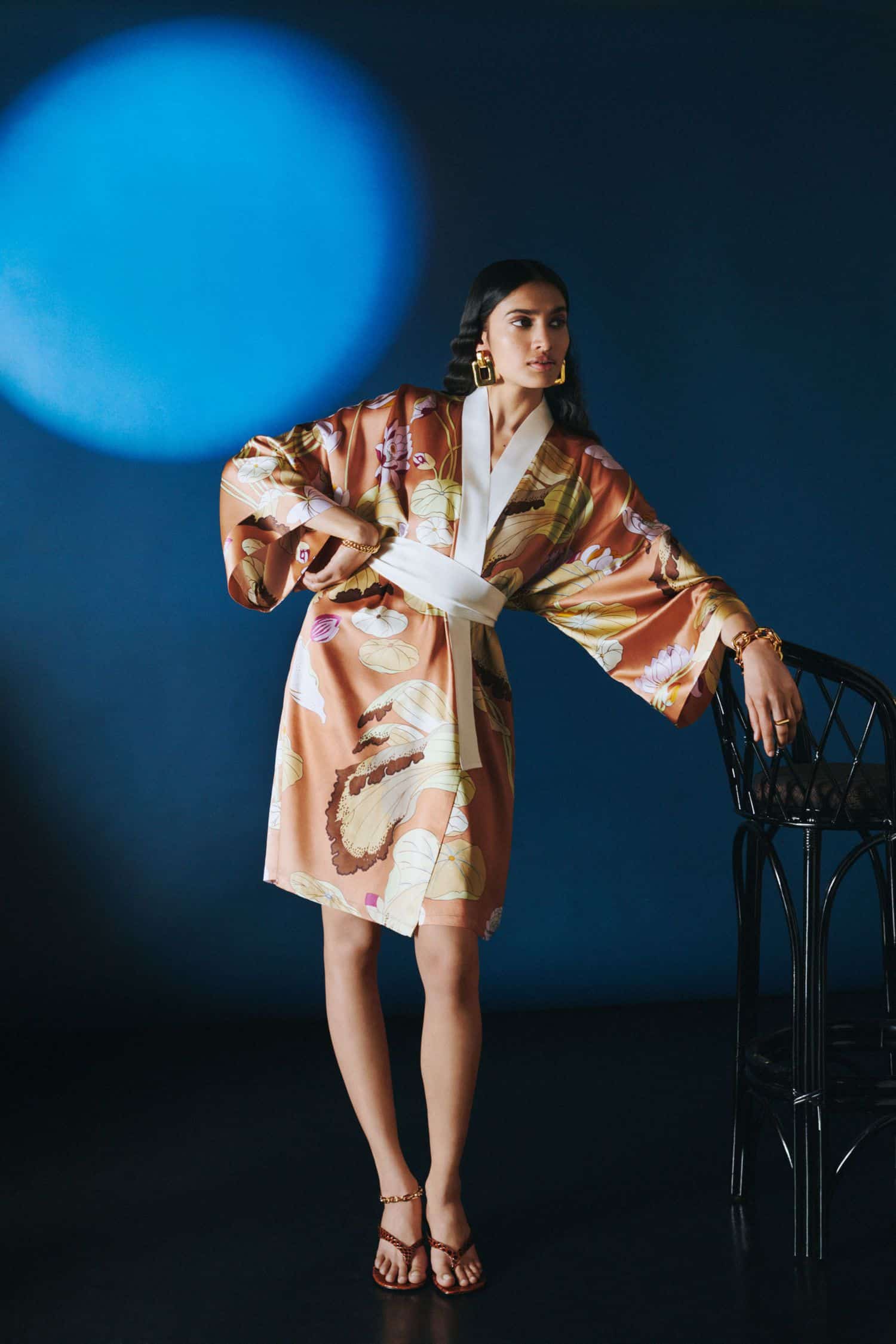 Ferragamo put on its dancing shoes for its latest drop!

For its latest womenswear shoe unveiling, Salvatore Ferragamo looked globally for inspiration. The resulting find was a desire for freedom and alas, the “Let’s Dance” collection was born. With the idea of creating shoes to encourage freedom on movement and ease, the collection kept lightness and comfort (and dance-ability!) top of mind with a ballet flat, a lightweight lace-up, a moccasin, a sandal with a refracted high heel, a chunky heel, and a soft boot with a block heel. With each design, the offering reminds the wearer of the power of expression and the simplicity of breaking out into dance—wherever and whenever they may be. With a color palette ranging from black and silver to bright red and rhinestone-adorned hues, Ferragamo ensured that the collection provided for every look and moment of the day. In celebration, Ferragamo has launched the Ferragamo Dance Challenge on TikTok, which will welcome users to follow dance tutorials and try out different choreographies for a chance to be featured on the brand’s page. The collection will be available to shop beginning mid-June on Ferragamo.com and in select boutiques.

Designer Peter Dundas and partner EV Bousis celebrated their first Father’s Day on Sunday with their days-old son Alexios Peter Bousis-Dundas, who was born by surrogate on June 14. The proud parents took to Instagram to share the exciting news—with encouraging messages to anyone seeking parenthood in the captions. “…if you are hoping to have children in a place that doesn’t support this journey PLEASE don’t [lose] faith. God is good and the world is changing and it will for you too. For anyone with expecting two dad or two mom friends; please support them wether they have kids or hoping to have kids. Their children will have so much love and remember LOVE ALWAYS WINS!! 💙” Dundas wrote. Will baby Alexios be sitting front row when Dundas shows this NYFW? We can only hope!

In partnership with online retail destination FRWD, American fashion designer LaQuan Smith has released his first foray into the swimwear category—and its bold aesthetic nods to the distinctive style his label is fast becoming known for. The 11-piece offering was designed with the same mantra the brand has lived by since its inception: inspiring confidence in women, no matter what they wear. How, you might ask? Daring cut-outs, sizzling details like paneling and lace-up ties, and graphic lines. The collection, which features bikinis retailing from $253 to $275 and one pieces from $300 to $450, is available on FWRD now. 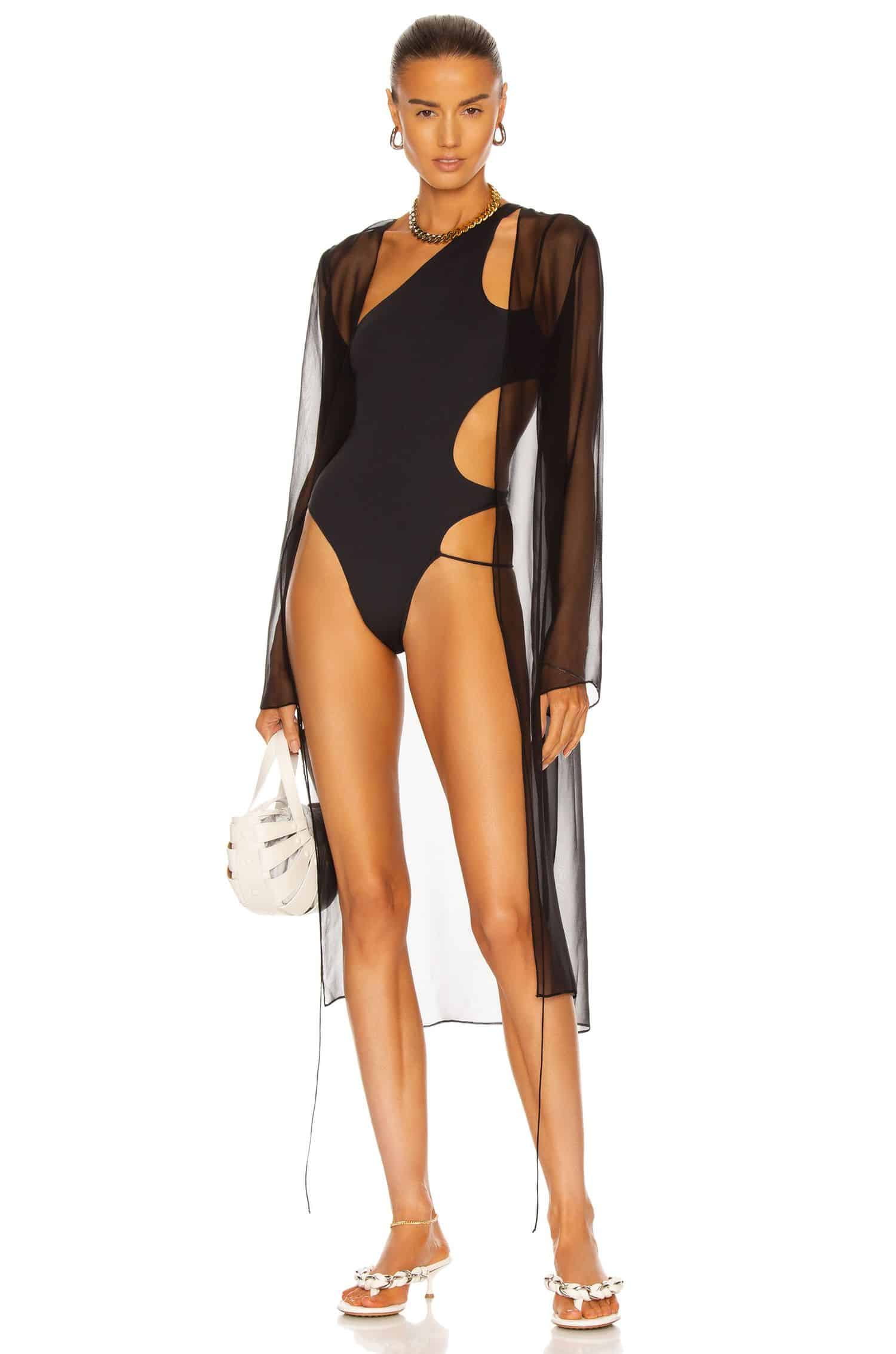 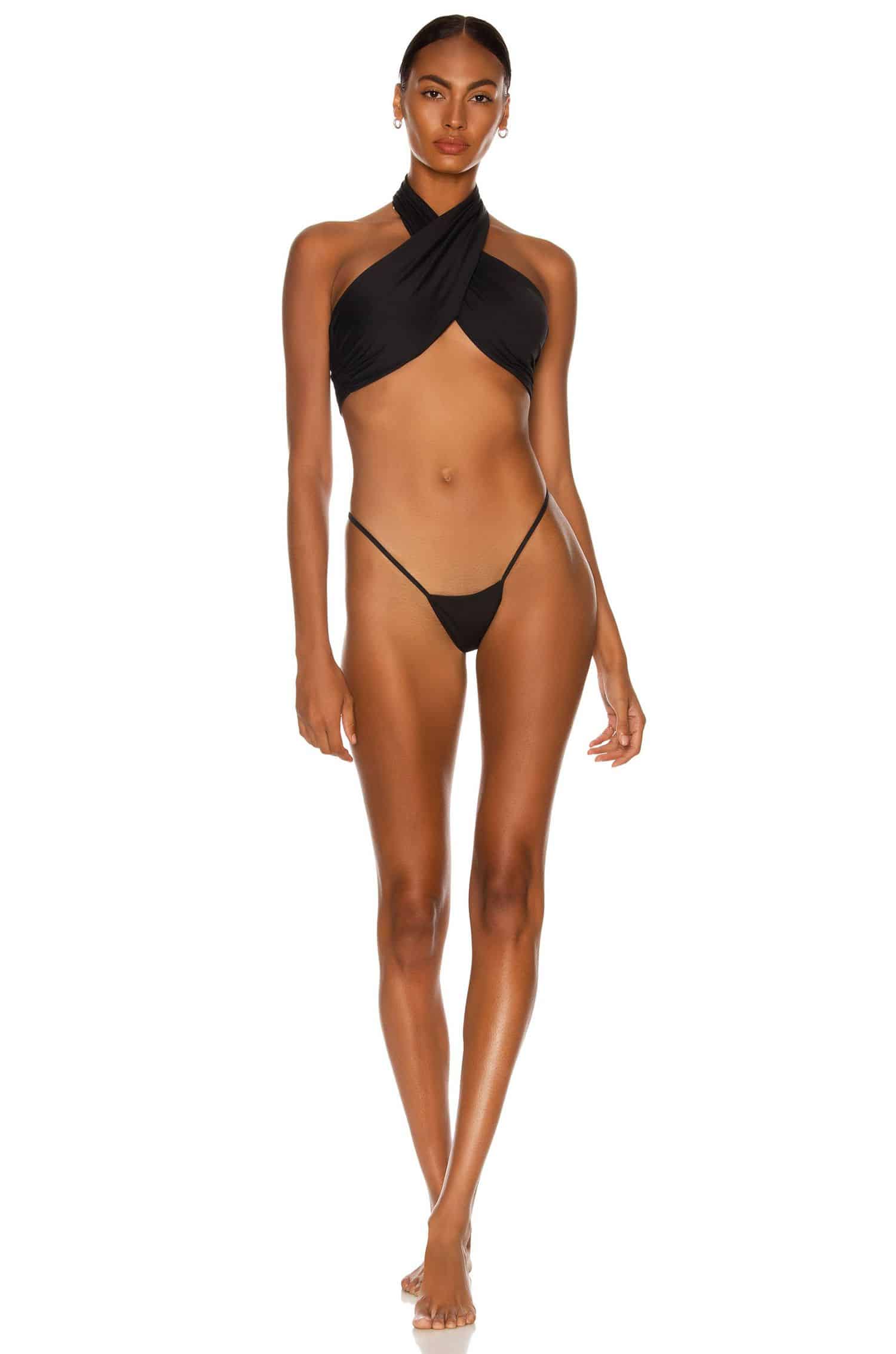 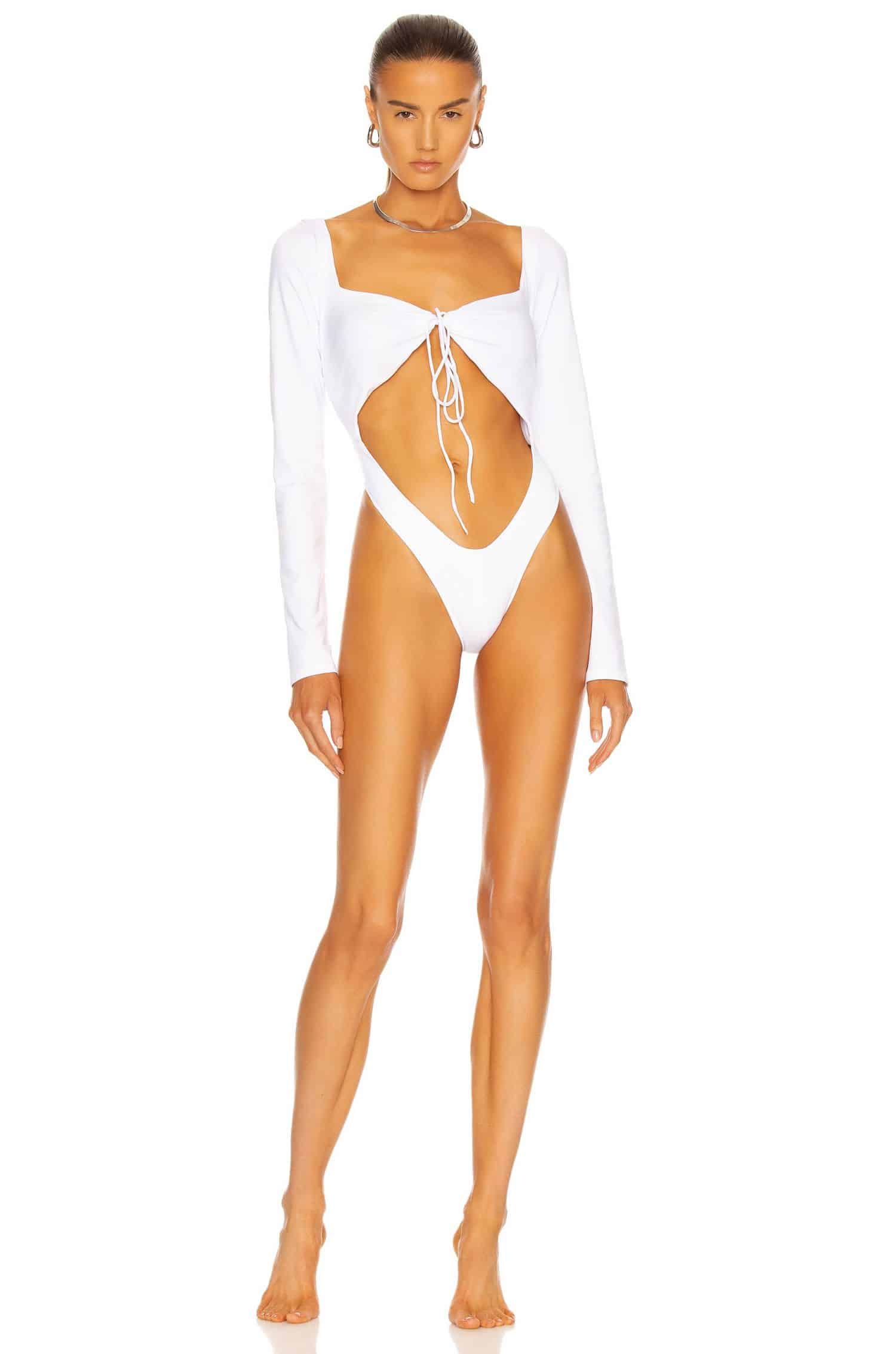 Jewish dating app Lox Club partnered with Andrew Warren, Ryan Thomas-Roth, and Danielle Naftali to host an Alice in Wonderland-themed cocktail party and dinner in the Hamptons on Friday evening. The event was in honor of Pride month and organized in support of Keshet, an organization that advocates for the inclusion and equality of all LGBTQ Jews. Among those in attendance at the whimsical bash were Ava Dash and Connor Kennedy, Ethan D’Spain, designer/DJ Timo Weiland, Onia’s Nathan Romano, Princess Noor Pahlavi of Iran, singer Noriella, Roma Abdesselam, model Monika Clarke, and other content creators such as Ryan Clark and Julia Moshy. Guests feasted on a menu curated by NYC hotspot Rubys at a tabletop designed by Social Studies. The event raised some $25,000, and Lox Club will be matching a portion of donations. 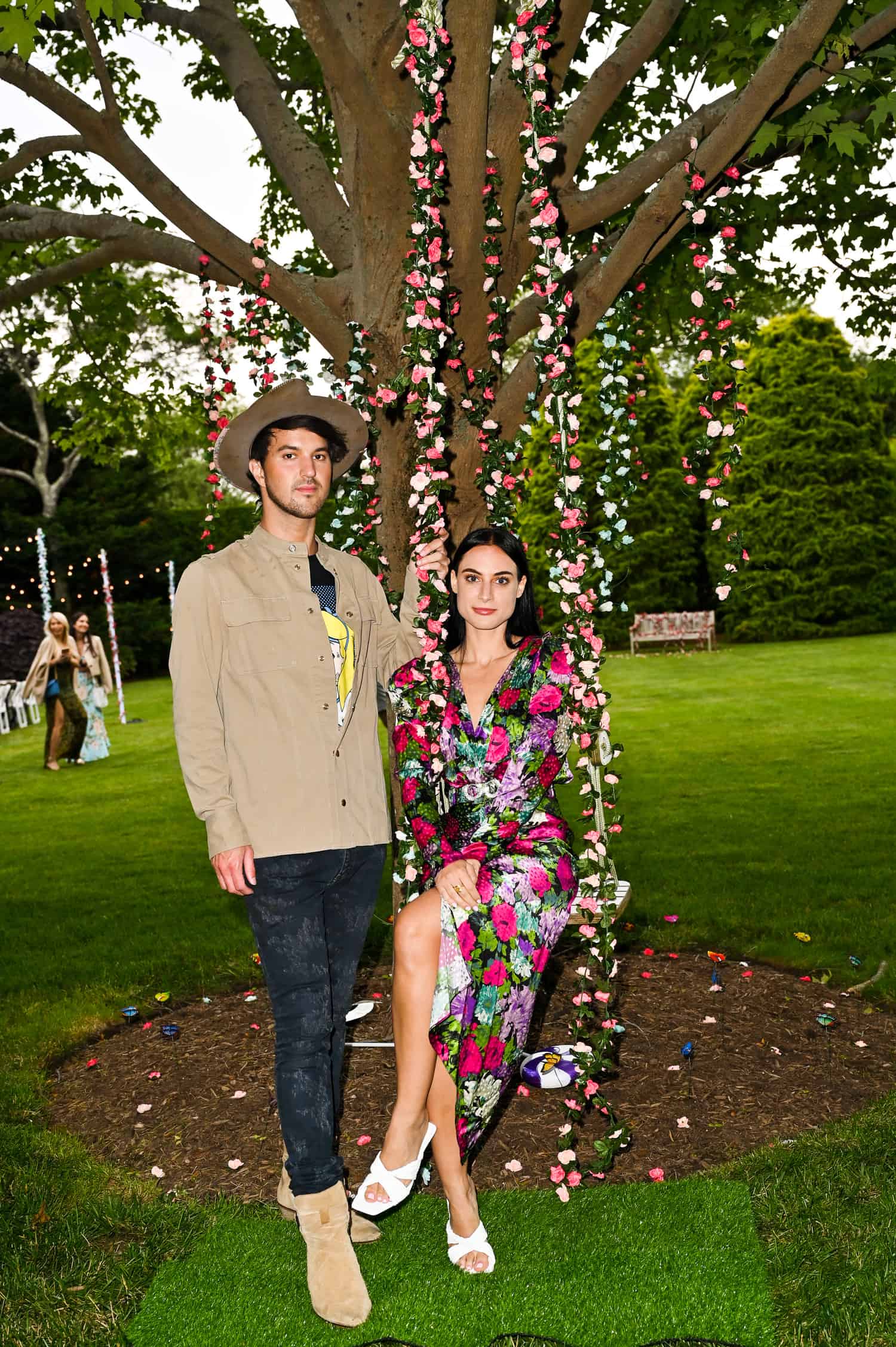 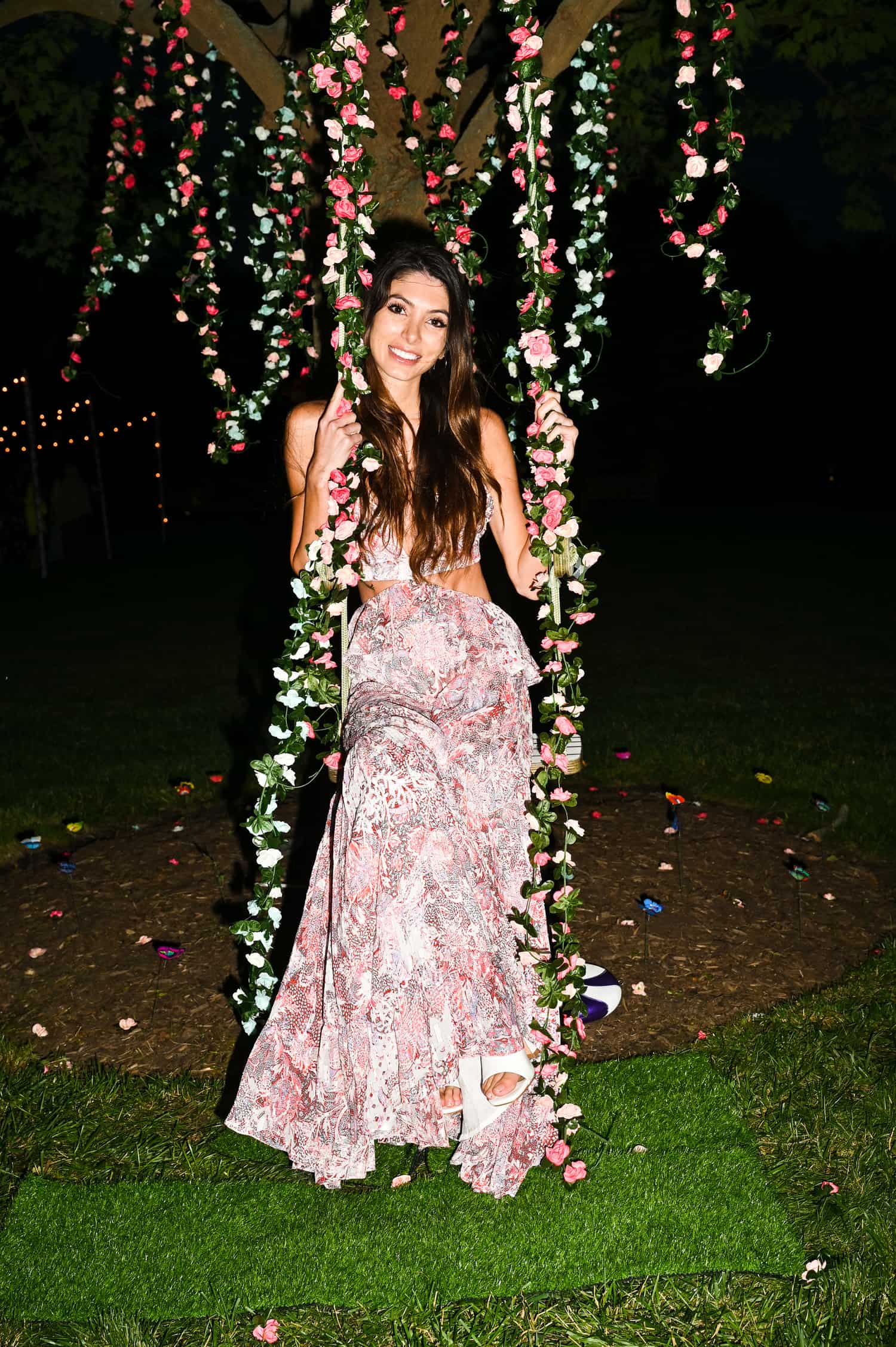 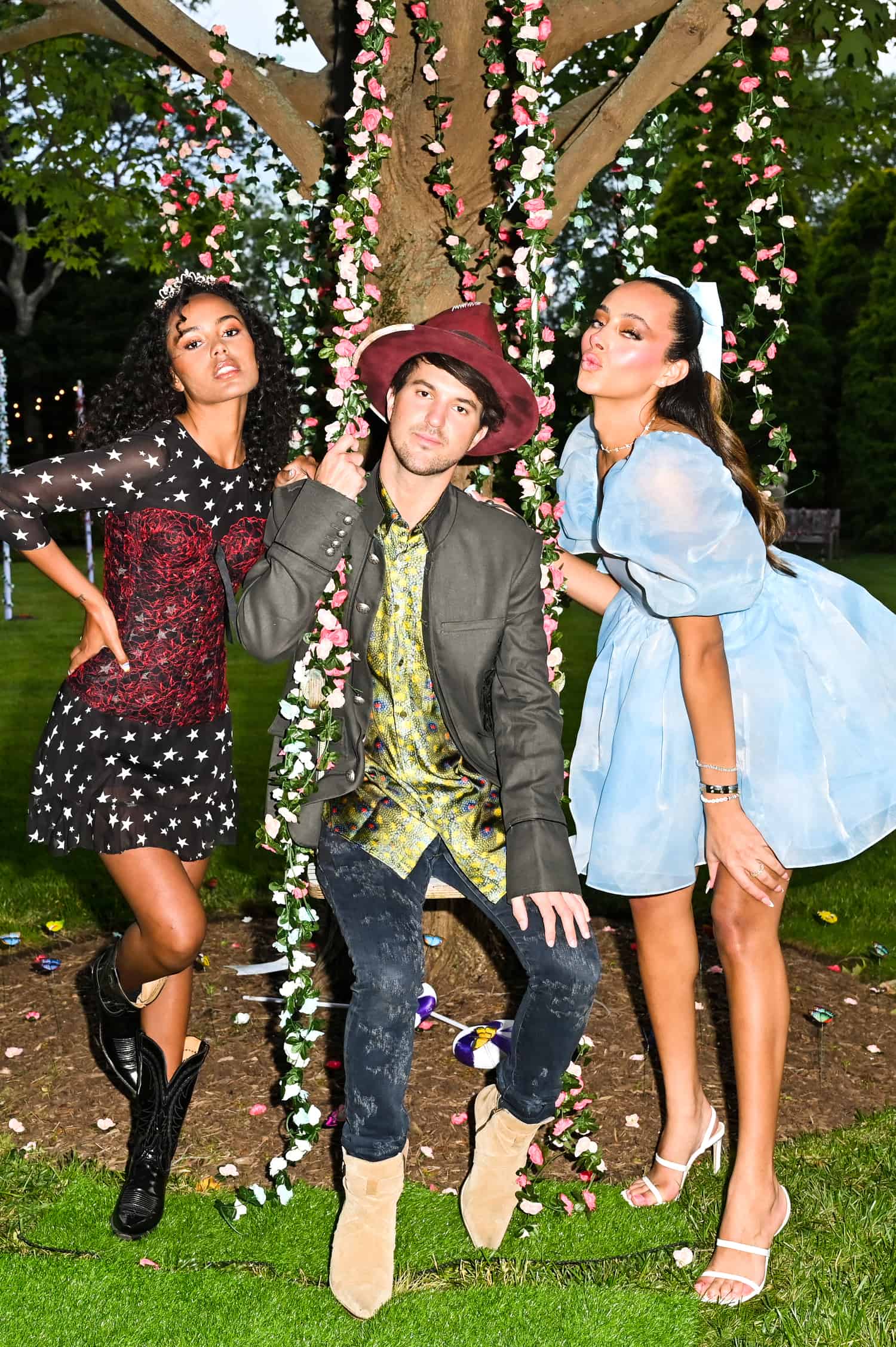 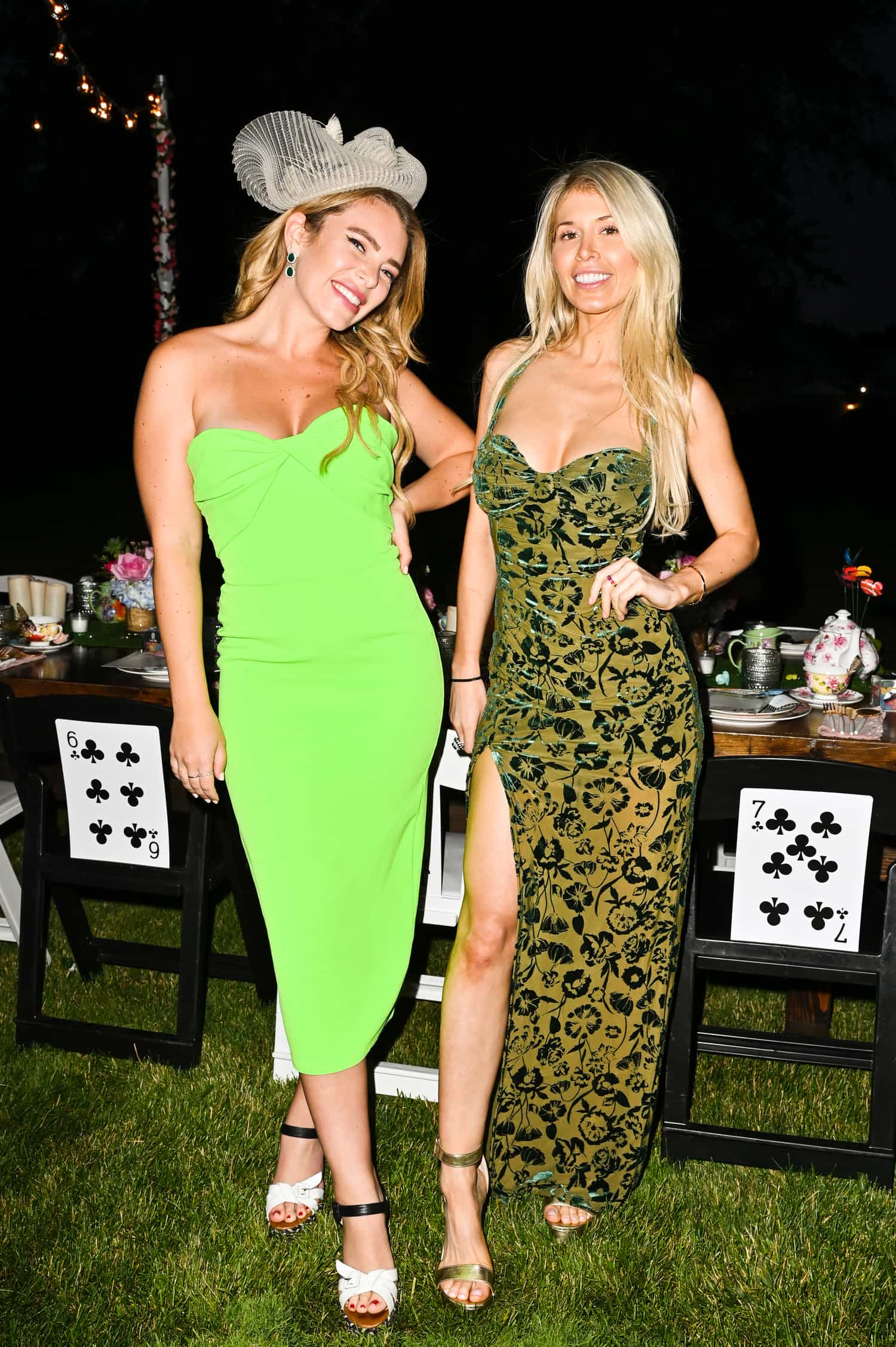 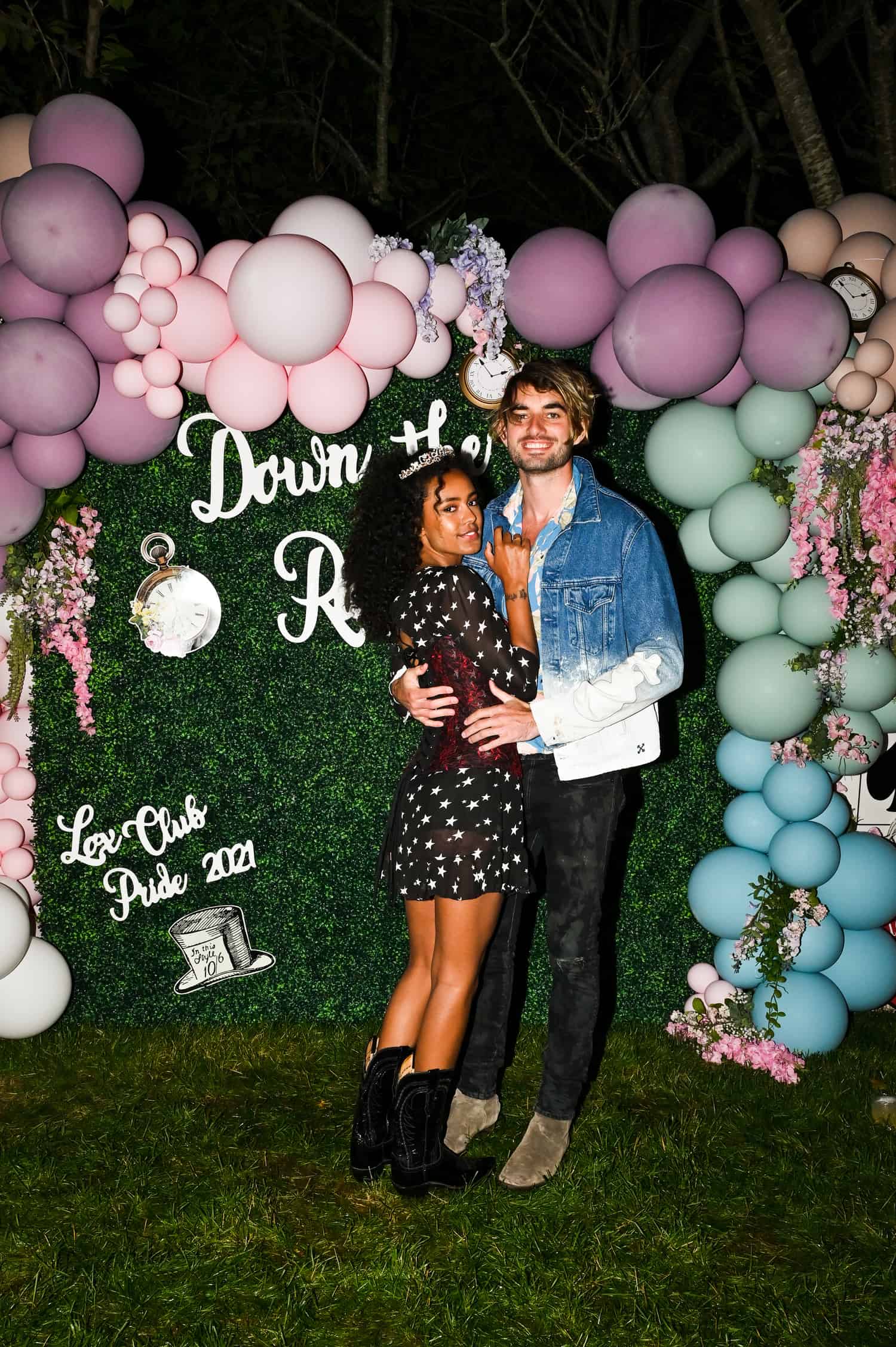 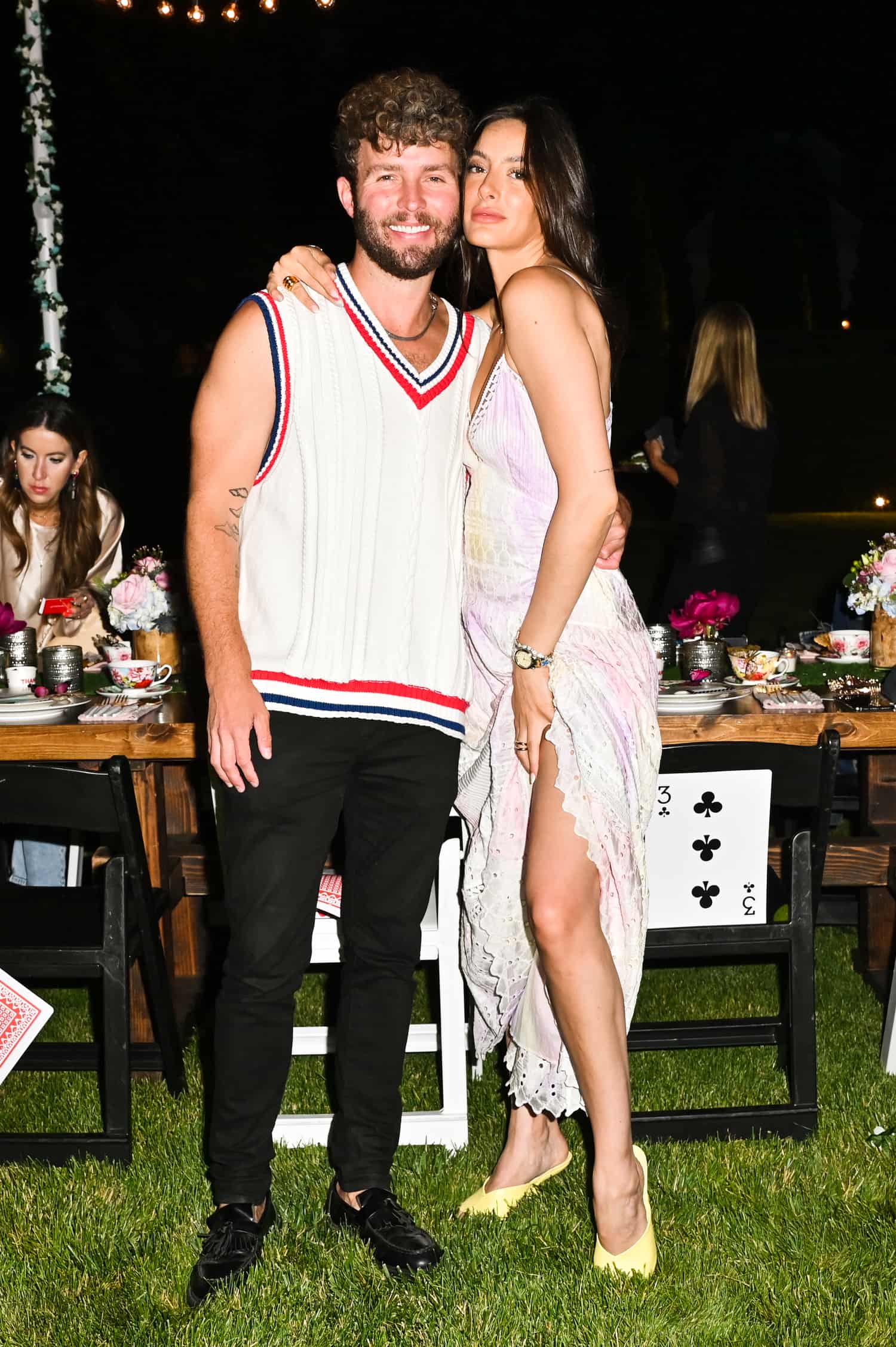