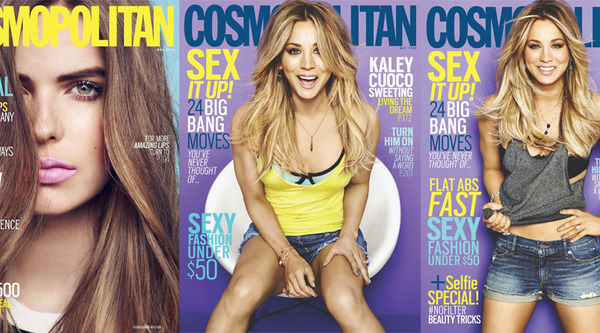 (NEW YORK) Forget subscriber/newsstand covers or very obvious advertiser cover wraps: the next frontier of cover variations just might be peel-away advertiser-sponsored covers, with the editorial cover beneath. Such is the case with the subscriber cover of Cosmopolitan‘s May issue. Mod Robyn Lawley is featured in a closeup shot on the L’Oreal-sponsored cover, which can be lifted off to reveal the glossy’s actual cover gal, Kaley Cuoco-Sweeting of The Big Bang Theory. As for the cover featuring Lawley, a spate of cover lines teasing what’s inside the pages of the mag feels very editorial. So does the design: unsurprisingly, as Cosmo‘s editorial team designed the removable cover.

The tightly-cropped beauty shot of Lawley is quite different from Cosmo‘s trademark body-flaunting, cropped-at-the-thigh cover fodder, but otherwise it certainly feels like an actual (read: non-sponsored) cover. Muddled lines between editorial and advertising interest, or simply more ways to shout out Cosmo‘s freshest content? The latter, as far as EIC Joanna Coles is concerned. “It gives me twice the real estate to explain what’s in the magazine,” Coles told WWD, likening Cosmo‘s peel-off cover to “the white flap on The New Yorker“.

L’Oreal is mentioned on the peel-off cover in the bottom lefthand corner, slightly smaller in scale than the other cover lines: “Score $500 worth of L’Oreal Paris Makeup!”, which calls out a beauty loot contest inside the mag. The cosmetics behemoth bought the removable cover as well as 10 ads inside the mag; Cosmo purportedly proposed the additional cover concept to L’Oreal. Some media outlets have made a big fuss about whether the peel-off, ad-sponsored cover concept violates ASME’s rules. “As I noted, we take ASME guidelines seriously. Our May tipped subscriber cover stands on its own—it’s not an ad pretending to be a cover. The L’Oreal mention refers to an editorial competition in the issue,” Coles said in a statement. The issue hits newsstands on April 8.

Now We've Seen Everything: The Royals Take A Selfie