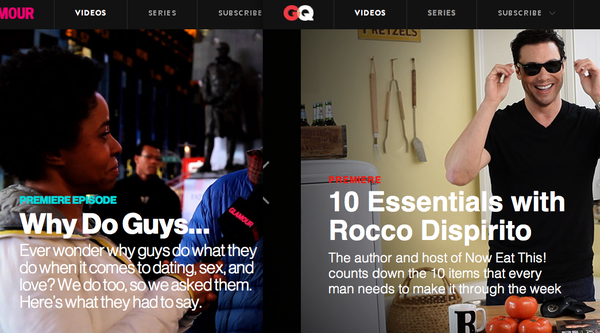 (NEW YORK) GQ and Glamour are the first 4 Times Square glossies to get the full Condé Nast Entertainment treatment, via a new digital vid network of original series inspired by the duo of mags. Separate YouTube channels house the content, in addition to official sites for each title, which encompasses a quartet of shows per magazine. What’s the point? CNE wants to be “creating more ways for our unparalleled audience of influencers and trendsetters to experience their favorite content,” said Entertainment division president Dawn Ostroff in a statement.

A handful of episodes per series have been released today for the channels’ launches, with additional episodes rolling out on a weekly basis. The episodes hover around five minutes apiece in length. On the financial front, the new programming counts Procter & Gamble, Microsoft, and MondelÄ“z International as sponsors.

For Glamour, the roster of series consists of: DOs and DON’Ts of the Week, a countdown of the brand’s popular section in-book and the various branded spinoffs it’s entailed; Why Do Guys…, a demystification of men hosted by comedians; Fashion Week Ride-Along, featuring EIC Cindi Leive carousing throughout NYFW; and Elevator Makeover, which is exactly what it sounds like. “Every page, every blog post, every event is a reflection of the conversation women are having. We’re excited to continue that conversation with digital video, a natural next step for us,” Leive said in a statement.

GQ’s series set is comprised of: Car Collectors for the auto aficionados out there; The Ten, in which men du moment walk through their 10 essentials; “Jogging with James,” a series about Elettra Wiedemann‘s husband, James Marshall; and another workout-oriented series, Fighting Weight. “These new digital series give fans of GQ even more of their favorite content from the most stylish voice in fashion and culture,” said editor-in-chief Jim Nelson in a statement.

Expect a second wave of Condé Nast Entertainment series to hit next quarter, according to reps, though mum’s the word on the next mags of focus. Bon Appetit, Vogue, and/or Vanity Fair are on our radar. Et vous?
ALEXANDRA ILYASHOV

Urban Outfitters Winds Up Its Web Presence As Profits Soar