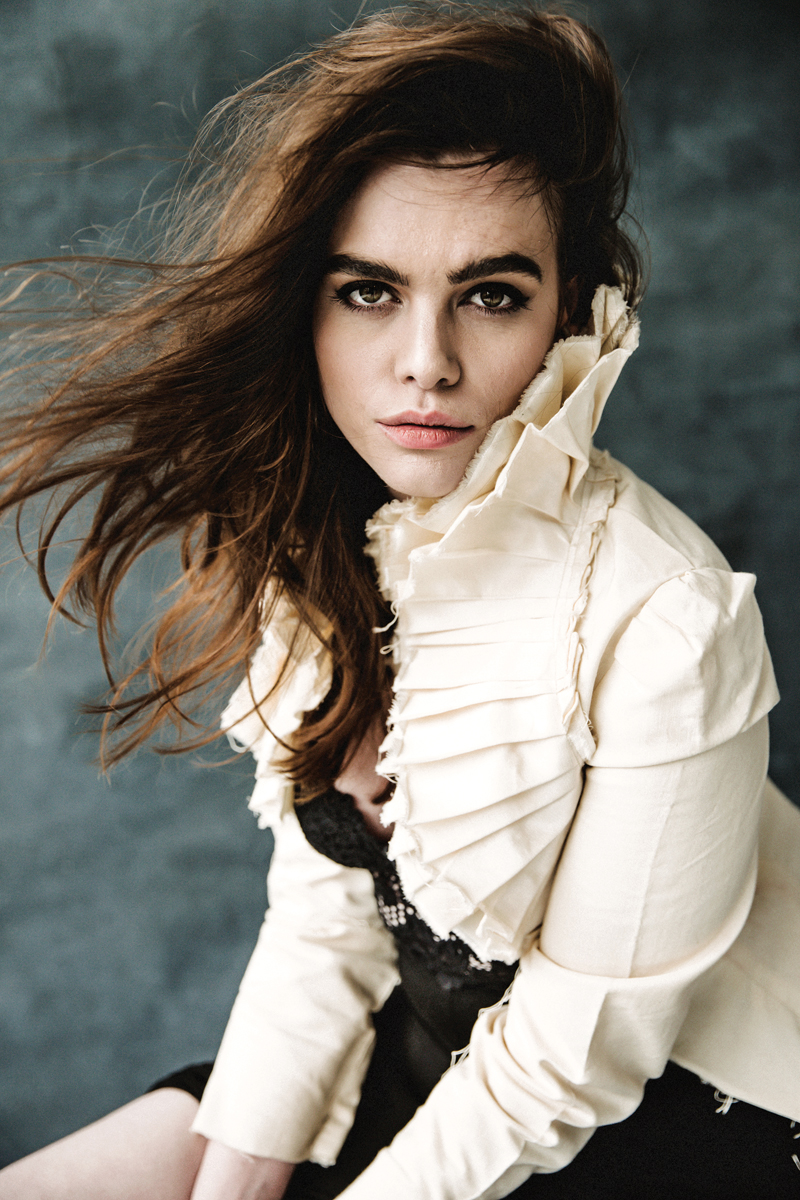 When model Charli Howard’s London agency dropped her for reportedly being too big—at a shocking size 2!—she fired back publicly on social media…and promptly moved to NYC. Now she’s back and better than ever with serious representation and a mission to upend all our old-fashioned notions of beauty.

Tell us the story behind the headlines:
What happened with your modeling agency in London?
I was just dumbstruck: I was dropped a year after I got signed. I had gone into the agency recently to take some Polaroids—I was looking at them, I never felt so toned in my life—and they said, “You really need to tone up more,” which really meant, “Lose weight.” Apparently the photos had been Photoshopped a lot, so they didn’t even represent who I was anyway. After that, the work really started dying out. They called me one day to say I got a job in Copenhagen, so I went to Denmark. The only outfit I couldn’t fit into was a pair of leather trousers, which obviously don’t stretch. When I got back, the agency got a phone call saying I couldn’t fit in them, so they said, “We really appreciate how much you go to the gym, but it’s just not going to work. Maybe we can stay friends.” And I was like, “No, we’re not going to be friends at all.” I really did everything I could: dieting all the time and exercising as much as I could. Afterward, I felt so done with modeling.

How did you get signed in the first place?
I had very little self-confidence growing up, so I felt like modeling would validate my existence. Many teenage girls want to get into modeling, but I basically failed. I went to all these agencies in London, and I couldn’t get signed. Then my friend randomly sent off my Facebook pictures to agencies, and one picked me up. I was 21, so a bit older than most. Most girls start out at 16. I was lucky.

Now you’re signed with Muse in New York.
It was such a whirlwind because after I was dropped I started getting inundated with messages on Instagram. Within a week or two I got a message from Muse saying they wanted to meet me. I was always told I couldn’t go to New York because of my height, so I thought this could be a really good opportunity. I took a few days to think about it, went back into my messages and ended up flying to New York and got signed. It’s been amazing, because I can finally just be myself. I don’t eat loads of junk food and stuff, but I’m just my natural shape, and that shape was never going to be a size 2. I’m a size 4–6 now, and I’m happy being who I am and still getting to model.

How did this experience impact your view of the fashion industry?
It showed me that there are people who are willing to take risks, who are way more open-minded about women’s shapes. Then you have the others who are more than happy to follow suit and just go with what they read in a magazine. I don’t hate the industry at all, but there are aspects I think could be improved.

What sparked the idea to launch your All Woman Project?
When I first landed in New York, I went over to Muse and saw a plus-size board. I was like, “What is this?” I’d never seen anything so amazing. New York was really the only place where girls are literally getting the best work at a bigger size. I met a girl from the board at the agency for coffee [Clémentine Desseaux], and we both questioned why we never saw straight-size girls and plus-size girls in the same campaigns together. It’s always separate. Since we’re both capable of modeling and our sizes don’t limit us, we thought of making beautiful images where we’re all represented, and that’s what we did. It came together in a matter of eight weeks, and we launched this past September. We called upon girls who were not only beautiful but had something to say, whether they speak on body positivity or other lines of activism.

The project is social-media based. How have your followers reacted?
We started posting the pictures that were shot really beautifully by Heather Hazzan and Lily Cummings. After that we wanted to figure out how to get normal girls who read fashion magazines to get involved, so we started contacting them and they now submit videos to our Instagram about what makes them feel “All Woman,” and the following has been crazy. It went from like zero to 20,000 followers in a month.

Which models inspire you?
Crystal Renn was the first plus-size model I ever really saw. She struggled badly with anorexia, but she made it as a plus-size model. I also really like Cameron Russell—she does a lot of environmental work and did a TED Talk about why modeling isn’t the be-all, end-all of the world. I had the chance to meet her. I remember asking her if speaking out damaged her career, and she was like, “No, you have to.” That encouraged me to go full-force with everything I was doing.

What is lingerie brand Aerie’s involvement with the All Woman Project?
Aerie is such a positive, female-friendly brand. We teamed up with them [to create a campaign] where all the girls [Iskra Lawrence, Quincy Davis, Paloma Elsesser, and others] are wearing some of their pieces to showcase Aerie in a different light. Right now, we wanted to make it a bit more edgy and high fashion, so we mixed and matched their pieces with all-female higher-end designers. We’re launching the project on social media, and we also have an event coming up with Aerie around Fashion Week to showcase the images. It’s super exciting.

Who would you love to star in the next All Woman Project campaign?
I love the girls from Orange Is the New Black. I think Ruby Rose—my girl crush—or Danielle Brooks could be amazing. I’ve watched each season twice. We also want to work with trans women and those with disabilities to showcase as many womenas possible.

Some rapid-fire questions: What movies have you seen lately?
Fantastic Beasts [and Where to Find Them] was so good, but I’m really into Netflix. I just got into Breaking Bad. I know I’m way behind on that, but I’m addicted.

What music are you into?
It’s embarrassing—I still listen to the Spice Girls. I love Ginger Spice! But my secret obsession is Nicki Minaj. I literally rap Nicki Minaj songs, or at least I think I can.

Any book recs?
I haven’t picked up a book in a while…but The Circle [by Dave Eggers] is the latest. It’s a bit like Black Mirror—how technology can basically take over the world.

You’ve been living in NYC since last March. What’s been one of your greatest discoveries?
By Chloe. I go there every week. If I had the money, I’d stay there all day. The sweet potato fries and pink lemonade…it’s so good.

Do you have a hidden talent?
I speak German! It was actually my first language. My dad was in the forces, so we moved around a lot.

If you didn’t pursue modeling, where else could you see your career going?
I’d definitely do something involved with writing and the media, so maybe I’d work at a magazine. I’d also love to get into TV presenting, and I think in America, I can do that. But now, I still want to pursue modeling, continue doing more charity work and helping women in any way I can.