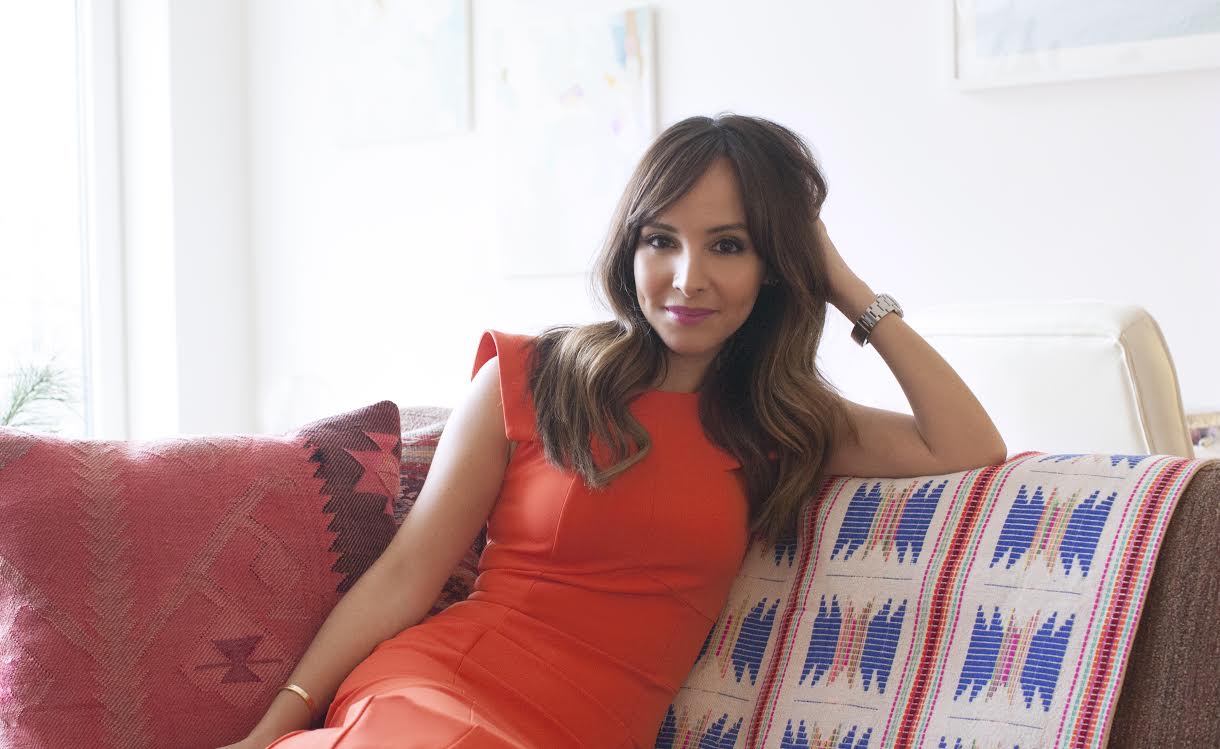 Texas native and adorable brunette Lilliana Vazquez lends her style expertise on both The TODAY Show—she was recently named a contributor—and her blog, The LV Guide. We caught up with the style maven on her digi destination and what she’s loving in fashion these days.

How did you get started in fashion?
My very first job in fashion was at W magazine. I was an assistant on the ad sales side to the fashion director and the beauty director. I didn’t study fashion in school or anything—I was an international business and entrepreneurship major, but fashion was what I loved. So when I got the offer from a magazine in New York, I was like ‘Ah! This is like my Devil Wears Prada moment!’ I was so excited.
Where did you go from there?
I actually took a really different job. I ended up going to work at a multicultural ad agency, so we did a lot of the print and commercial work for really mass retailers like J.C. Penny and Sears, where we piloted this “real women” fashion campaign. We were 90% there with Sears and the client was like ‘No, I want to go back to models, I don’t want to use these real women.” They were gorgeous and had great stories—that was kind of like my lightbulb moment. I didn’t understand why there wasn’t fashion advertising or a magazine that really spoke to real women. Obviously there’s the high-end stuff, like the world I came from at W, which was hugely inspirational, but it was out of my league. I wished there was something that felt more accessible to people like me and to the people consuming this content. I sat on that for a really long time and had the bug to create something to fill that void.

Is that where the idea to start your blog came from?
I think so! I started my blog in 2008. Back then it was called Chic Chicas—now it’s called The LV Guide. I was trying to create a space that was still very aspirational, really pretty and packaged nicely while being accessible. I’ve always said that accessibility has been critical to the success of my personality on-air and as a content producer online.
You’ve been blogging for a while!
Yeah, it’s funny because when I first started the blog I’d have to explain what a blog was to people—they didn’t know. I was a huge consumer of blogs right when they started, like BrianBoy, Susie Bubble, The Man Repeller, and Emily Schuman from Cupcakes and Cashmere—all the core bloggers. Eight years later it’s such a way of life for so many people. It’s incredible.
Tell us about the content that you post.
The blog has transitioned into more of a lifestyle destination. I started the blog when I was around 27, right after I moved to New York from Philadelphia. I was in a very different place in my life when really the only thing I cared about was fashion. Now I’m 36, married and living in New York—there’s a lot of things that drive the decisions I make, especially when it comes to purchasing. So now, I’d say it’s more lifestyle oriented and very affordable and accessible, but there’s still a lifestyle approach to it. It’s fashion, beauty, home, books…it’s things I’m interested in a day-to-day setting. 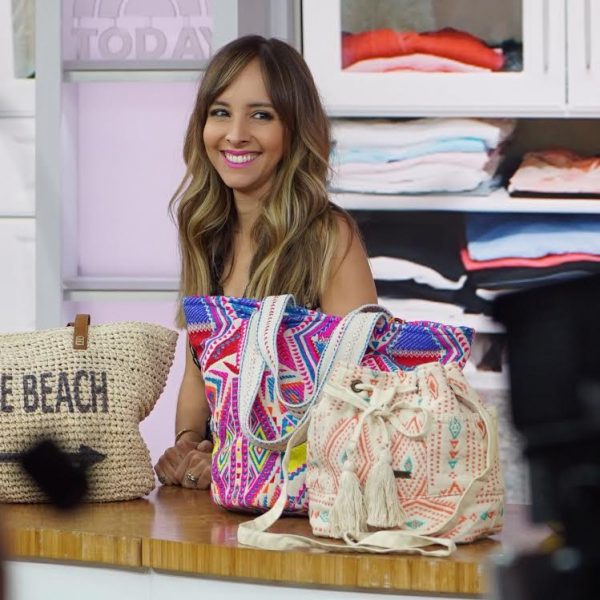 How did you get into broadcast?
The very first gig I ever had on television was actually in Philly. It was a celebrity “looks for less” segment that I did at H&M. The reporter was working on a story about Jennifer Lopez and was looking for somebody, like a shopping or style expert, that could really show viewers how to recreate some of her signature looks for less. From there I had that tape and I was able to really pitch myself, which is something I’ve always done. People are always like ‘Did you have a publicist?’ No, I could never afford a publicist. I still don’t really have a publicist; I have a friend that serves as my publicist. But I was able to kind of turn that into a national segment on the Nate Berkus Show. And Nate [Berkus] became a good friend of mine and a huge supporter. He’d have me on the show pretty much once a week every week that first season of his show. And then that turned into another million TV hits. So I’ve done Rachael Ray, Wendy Williams, Steve Harvey and others. Once I started to do a couple of those, then everybody was like ‘Oh my gosh, you not only deliver a great segment, but you also know how to produce’ because I came from a radio production background in college, and also at that time I was working at Channel 10 in Philadelphia.
And now you’re a regular on The TODAY Show.
Yeah! I was doing fashion expert segments for The TODAY Show, just like everyone else you see on a regular basis, about 4 years ago. And in the last 4 years I worked really, really hard to get them to kind of see me as not just an expert, but as a potential correspondent, because that’s really what I do. That’s what I did for Channel 10 in Philly, that’s what I did for New York Live on NBC 4 here in New York and I really wanted to build that part of my career. In March, they added me as a contributor. So now, in addition to my fashion duties, I’m also able to cover pretty much everything in the lifestyle space. I just did a red carpet for them, I’m going out to do a cast interview with the ladies from “Bad Mom” in LA in two weeks. I do a lot of adventure and travel stuff and get to do a variety of different beats, which I absolutely love. That’s the part of my job that I love the most. I love writing, I love producing, I love being out in the field and I like telling a story. 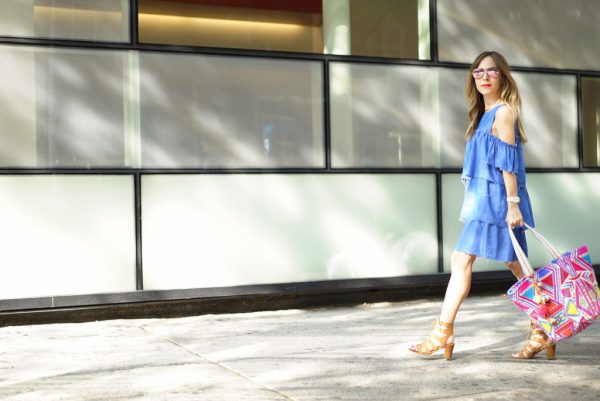 How do you describe your style?
I grew up in the south, so I tend to lean to very feminine, but having spent the last almost 15 years on the East Coast, there’s a little bit of edge to my accessories, like my shoes and my bags and my jewelry—even my makeup.
Do you look anywhere for inspiration?
Like everyone else I am constantly on Instagram. I tend to follow a lot of stores and influencers from Australia. I just love the style because as I get older I find my style is relaxing a little bit more and I think Australians have this natural bohemian vibe to the way they dress and the way they put themselves together. There’s an ease about it that’s very cool. It’s kind of like the new French girl.
What brands are in your closet?
I live for Nicholas. I’m petite so I find a lot of challenges with a lot of different brands. Once I find a brand that fits me off the rack, I’m super loyal because I don’t have to tailor it. Self Portrait is also a huge favorite. I love Elizabeth and James too and I love Jason WU—he’s a friend. We met at the White House a few years ago and got to know his personality and love his clothes. I’m also a huge, huge fan of ASOS petite. And like every girl, I’m obsessed with Zara and H&M. Style Stalker, Likely and Rag & Bone too.
What are you up to this summer?
I work a lot on the weekends for The TODAY Show, so I’m literally going to LA two weekends every month for them to cover stories. But when I’m not there, my husband and I just bought a house in Montauk, so I’m busy redecorating and getting the place together, hopefully spending a lot of time in my pool! We love Montauk—it’s such a perfect spot for us. It’s beachy and chill. To me it’s like the anti-Hamptons, so it’s really nice to be there and literally walk around in flip flops and jean shorts and just not care.

Monogram Ancient Greek Sandals in the Hamptons this Weekend

Hamptons Hermits! Is Staying in the New Going Out?