Behind The Scenes With Charlie Siem 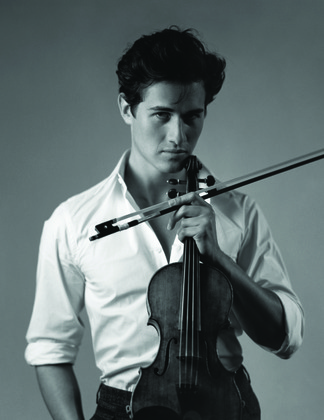 Acclaimed classical violinist and rising fashion darling Charlie Siem has written an original piece of music for CBS Watch, the official magazine of CBS. He talks to The Daily about composing for print, posing for Karl Lagerfeld, and playing for the Princes back at Eton.
BY EDDIE ROCHE

How did you start working with CBS Watch?
It was at the suggestion of [editor in chief] Jeremy Murphy, who is a friend of mine now, partly because he featured me a few years ago. He had the idea for me to write a piece of music for the magazine. I’ve never been a composer, and it was initially something I declined. He insisted and kept asking. Eventually I thought it must be destiny and a wonderful challenge. I thought, ‘What the hell?’ I’m gonna do it! I started messing around on my violin and made a demo, and he said it was exactly what he was thinking. I wrote the piece based on that.

What’s the piece being used for?
It’s a brand partnership. They commissioned me to write; to do something outside of the box. They’re using the music for an advertisement of the brand on TV and the Internet.

Was composing easy?
It came very easily. I got an idea of what I wanted to do almost instantly.

How would you describe the piece?
It’s quite cinematic and lyrical. It’s romantic.

What do you like to watch on TV?
I’m going to start watching NCIS because [actor] Michael Weatherly came to the recording session. He was in London doing a CBS Watch photo shoot, and Jeremy had a dinner for us for a number of people from CBS. We sat next to each other and he loves music, so he was very interested in this project. Now that I’ve met Michael, who is such a charming man, I’ve got to watch it.

The fashion world has certainly taken a liking to you. Who brought you into the fold?
It’s a wonderful way of getting exposure in a different world. The first person who gave me that outlet was Bryan Adams. I met him about six years ago when I was still at university. He photographed me for Vogue Hommes, for a feature on musicians. That was the first fashion-y thing I ever did.

Are you comfortable in front of the camera?
I’m always a bit self-conscious. I would never say I was a natural, but by now I’m more natural than I’ve ever been.

You’ve shot with Karl Lagerfeld, yes?
Again, it was very coincidental. I was doing a press piece with Harper’s Bazaar in Paris, which Karl was shooting. He said he was doing this book for Chanel that featured a number of actors and musicians and he asked if he could take my picture for it. I said, ‘Uh, that would be amazing!’ It was serendipity.

What did you think of Mr. Lagerfeld?
I really liked him. He surprised me. We have preconceived perceptions of people, which I suppose is a mistake. He was curious, and loves music and high culture. We had a wonderful discussion about opera and the violin. He owns a few violins and wanted to talk about them with me. He’s a fascinating guy.

Was there Diet Coke everywhere on the set?
Absolutely. There was a man standing behind Karl with a tiny silver tray filled with Diet Coke the whole time. He followed him everywhere.

You’ve also shot with Bruce Weber, right?
A few times. He’s a lovely man. He’s very respectful of everybody he shoots with, and a great pleasure to be around. He’s so interested in what his subjects are doing. He makes such an effort with people, which is always inspiring. He’s also a lot of fun because he’s very relaxed. He gets something out of you that you might not give to every one. We did this video for Dior Homme in New York with a ballet dancer, and Bruce got us to do this impromptu performance where he was dancing and I was playing. There was no preparation.

How did you react to making it onto Vanity Fair’s Best-Dressed list?
I couldn’t believe it. I don’t know why they would have included me, but I was really flattered.

Do you think you dress well?
I don’t think I’m good or bad. I like clothes and have my own way of dressing, but I don’t think about it as good or bad in relation to others.

What designers do you wear?
I don’t really wear designers. I’ve had a tailor since I first got a suit. I like how clothes were made in the past. Everyone had their stamp of individuality. My clothes are conservative, but it’s the little details.

How many suits do you own?
About 12. I’ve made some for performing. I get them cut for more mobility in my shoulders. They’re made for sweating onstage.

You’ve been referred to as the Mick Jagger of the classical world.
I don’t know if that’s true! It depends on how one defines Mick Jagger. I think they just needed an eye-catching headline.

Who would you like to perform with?
There are so many: David Bowie, and I’ve always been a Pink Floyd fan, so it would be cool if we could raise some of them back from the dead.

You went to Eton. Did you know Prince William?
I was a year younger than Prince Harry, and Prince William was in his last year, so I overlapped with them both and played for them a few times.

When are we going to hear new music from you?
I’m very excited for people to hear this piece, “Canopy,” that I did for CBS, and my new CD is out in September. It’s all romantic classics.

You’re in amazing shape. Is that from playing violin?
I’ve always done quite a lot of exercise. I enjoyed playing sports in school. Now, I just need to keep up my posture. While playing violin, you’re locked in a position for several hours a day, so it’s important to strengthen the opposite muscles to avoid injuries.

Where are you based?
I’m always on the move. My parents are in Switzerland and the South of France a lot now, so I spend a lot of time there.

Any desire to move to New York?
Maybe. I’d like to play more in America. Maybe after this piece is done I can live in America for a year.