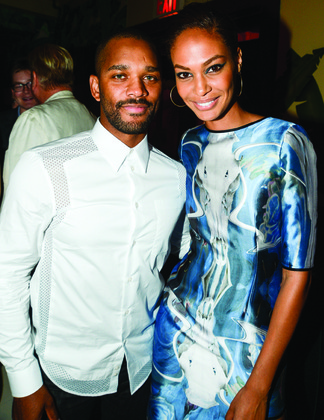 Imagine if you created a secret underground rendezvous exclusive for models and your girlfriend was a supermodel who hung out there with all of her friends…Yeah, that’s pretty much what life is like for modelloungeXmicrosoft’s Bernard Smith.

So, what’s modelloungeXmicrosoft?
It’s a space [underneath Union Square’s Coffee Shop] where girls come between castings and shows to check email, read, take a nap, and meet other models.

My girlfriend [Joan Smalls] would come to my office with her friends in between appointments. I couldn’t get any work done. Then they’d go to the Starbucks on Crosby and Spring and come back 20 minutes later complaining about nightclub promoters or photographers harassing them. That was a lightbulb moment for me.

Quite the list! What’s the criteria to get in?
It’s for models who belong to the top 10 agencies. No agents, friends, or male models can come.

Are any mods banned?
There are about 10. That lasts indefinitely. A lifetime.

Do models ever stay too long?
On occasion, but not often. A lot of the girls live in models’ apartments. This is better: You can play XBox here!

Would you do a lounge for non-models?
I don’t think that’s for me.

Joan’s career has blown up! What’s that been like?
I’m obviously very proud, but nothing has changed in our relationship. She’s so grounded. You certainly don’t want to get on her bad side because she’s not passive, but she’s a very good person. I love her. Her mom and I are always trying to figure out which of us is Joan’s biggest fan.

Behind The Scenes With Charlie Siem