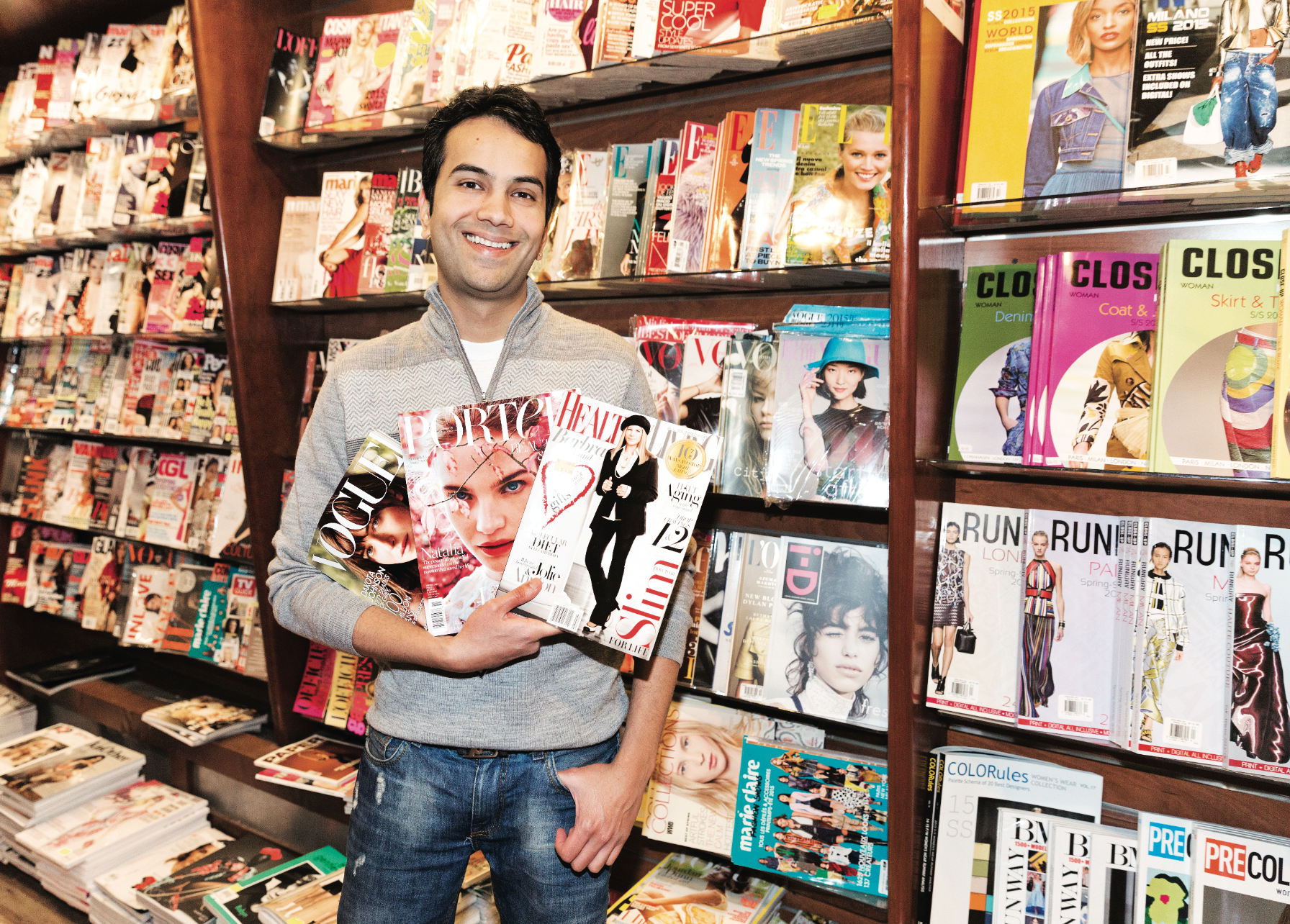 Ready for some quality chit-chat with our old pal Manish Golchha from 37th Street’s Magazine Café? Who’s selling? Who’s too skinny? Who should have been cast as Christian Grey? Our man-at-the-’stand expert has all the answers.

Nice to see you! What are you wearing today?
A Calvin Klein sweater, Louis Vuitton belt, and Cole Haan shoes.

Chic. How’s business?
Better than ever! V is doing awesome. We’re almost sold out. The covers are always racy. W and Interview are also doing awesome. We also just launched a new Magazine Café app. We want to make it easy for our customers to order from around the world.

Which price point is working for you?
Interview is $10, and with that quality and content, it’s a decent price. We sell a ton.

Have you been invited down to the new Condé Nast HQ yet?
No, but we do send a lot of subscriptions down there. We send Vogue UK, Vogue Paris, Elle UK, and Harper’s Bazaar UK. Whatever they fancy!

Any big sellers of late?
As you know, sex always sells, and Kim Kardashian broke the Internet. That cover of Paper was phenomenal. Who doesn’t like Kim? I don’t want to marry her, but I’d like to flirt with her. She’s pretty hot.

Is it that butt?
She has a good body overall. Good assets!

Did you take a copy home for yourself?
Yeah! It was a good shoot.

The March issue of Glamour has the stars of Fifty Shades of Grey on the cover.
It’s doing well. If you ask me, the casting in that movie was wrong. They should have cast Daniel Craig.

Would you have made a good Christian Grey?
Why not? I don’t think I’ll see the movie unless the reviews are good.

You’re still selling the September issue of Vogue in February. What’s that about?
It’s still selling. We over ordered, but we didn’t mind keeping the copies, because it makes the customers happy. A lot of people missed it and still want to get it.

Harper’s Bazaar’s cover line is “507 hot looks to love.” Do you ever fact check that number?
I don’t have that much time on my hands! I wish I did. Bazaar is a pretty stable seller. They don’t go for controversial covers. They go for classy.

How’s Lucky doing?
For $3.99, it’s almost like an US Weekly in terms of thickness. There’s not enough content. It’s only 96 pages. I want it to do well. I like these magazines, and I want them to be on our shelves.

Recognize any faces on the March issue of Vanity Fair?
Isn’t that Hilary Swank?

Amy Adams! Nice try.
Channing Tatum is awesome. Everything he does turns to gold.

What are you doing with Porter?
We are doing online promotions with them. In such a small amount of time, they’ve done pretty well to establish themselves.

You have copies of Charlie Hebdo. How did that happen?
When it came out, we had at least 1,500 people call us or stop by the store looking for it. I persuaded my distributor to get these copies and they finally decided to do it. I was on the phone with him every day for 15 days—my customers wanted it. It sells for $10.

You could have charged $20.
No, no. I know there were people selling them on eBay for $500, but we wouldn’t do that. That’s immoral. We got them too late so we’ve probably sold 75–80 copies, which isn’t close to what we would have sold if we had them earlier.

People are so fickle.
Those are your words.

What else is doing well?
Cherry Bombe! Have you seen it? It’s from Brooklyn, and it’s about food and culture. Nice paper quality. It’s a new age kind of publication. Adam Lambert on the cover of Classic Rock with members of Queen is also doing well, because they have a huge concert coming up in England. We’ve sold about 500 copies. We work with the Adam Lambert fan club.

Tell us more!
Someone posted about us on one of his fan pages about five or six years ago and since then, the numbers have been increasing every time a big issue comes out. A lot of our business comes from Adam Lambert fans.

Good to know! Where are the dirty magazines?
In the back of the store. We don’t sell too many dirty magazines, believe it or not. Not a big audience for Buttman.

Do you have shoplifters?
We used to—we were very ignorant. Then we caught a couple of people, and after that, we became very vigilant. As soon as they come in, we spot them because they are usually wearing a baseball cap or something to hide their face.

You’re still loving what you do!
Absolutely! We’re adding new ways for customers to reach us. Today, we carry the most magazines that we’ve ever carried.

You’re proof that the magazine industry is alive and well.
Yup. We’re thriving!

Last question: Why no Reese’s Pieces?
We sell out of them all the time! I need to talk to my candy guy. But Snickers is still our best seller. Satisfying, right?