All About Adam (Selman) 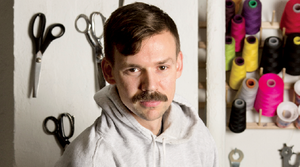 (NEW YORK) Chart-topping costume king Adam Selman took some time off from designing Rihanna’s tour looks to launch his own label last fall. From the sounds of it, he’s a got a hit!
BY EDDIE ROCHE

How did you get into fashion?
I moved to New York from Texas at 18 to go to Pratt. After I graduated I was a freelance pattern maker for The Row and Zaldy. At Zaldy we worked on costumes for Michael Jackson, Rufus Wainwright, RuPaul, and on Gwen Stefani’s L.A.M.B. line. Zaldy taught me almost everything I know. He’s ahead of his time.

What’s it like working on a RuPaul look?
The mannequins were the best part because we’d build them with ACE bandages and padding. The boobs would look like two cantaloupes.

You also worked on the Scissor Sisters tour?
They didn’t have a wardrobe person and asked if I wanted to go on tour with them. We went everywhere from Japan to Norway to the Swiss Alps where they’d perform on a ski lift. They’re still like family to me because we spent so much time together.

How did you start working with Rihanna?
[Her stylist] Mel Ottenberg and I had been dating for two years and worked together on a few projects like a perfume ad for Jennifer Lopez. Mel had never done a staged tour so I came on to help him with. I knew, for instance, that a stage costume can’t have vinyl in it.

Why not?
You sweat. It fogs over. It’s hard to maintain. I was consulting and then the next thing I knew I was making costumes. I met Rihanna and we hit it off.

You ended up doing the Rihanna for River Island line with her.
I had a lot of fun doing that, but that in the end was really Rihanna. I helped coordinate it and made sure everything was on point from the fabrics to the fit.

So when did you decide you wanted to break out on your own?
The New York Times did a small piece on me and I had mentioned that I wanted to do my own line. Once I saw something in print I thought, ‘I need to make that happen.’ I was a little naive about it. I thought, ‘It’s going to be small, it’s going to be fun!’ Now it’s a full-blown thing.

What did Rihanna think?
If she didn’t like the idea, I would have thought twice about it. She was really excited. I wanted to make a clear distinction between what Rihanna does and what I do. It was important to me that when I come to her, it’s for her, it’s our collaboration, and that this line isn’t about our collaboration.

Amy Sedaris was at your first show. How do you know her?
I did a Dolly Parton shoot and we met in Dollywood because she was in the video for the song “Better Get To Livin’” where I dressed all the extras. We hit it off.

What was meeting Dolly like?
My jaw was on the floor. I hugged her and it wasn’t a normal hug. I kind of patted her down because I wanted to get as much as possible. She was super charming.

What’s your least favorite part of launching your own label?
The money! I’m an independent designer. I’m always asking for favors and I hate that. It’s a lot to front. Luckily Rihanna has called on me to do more custom work and I got a call yesterday to do something for Beyoncé. I hope things like that continue to come in, but that’s an extreme luxury. It’s hard to design, make a business plan, keep your studio cool and happy, and have a personal life. I’m not freaking out about it, but it’s on my mind every day.

Is it worth it?
100 percent. Everybody in New York is here for something and I’m here for this.