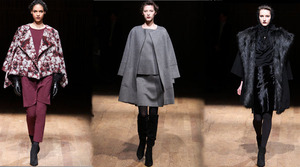 (NEW YORK) Josie Natori
Modern, structural, voluminous—to put it plainly, Josie Natori’s Fall 2014 offerings were large and in charge. Natori’s women were more powerful, commanding, and edgier than ever before. She played with layers, stacking monochromatic separates like tailored tunics over cropped trousers. New fabric technologies like outerwear in thick bonded wool and hand-cut 3D embellishment allowed for more structural shapes and provided a polished finishing touch. Natori’s inspiration, the romantic idea of folkloric Russia, became apparent thanks to ornate motifs, opulent embellishment, and shocking crimson hues. Accessories also took a cue from Russian fashion history as seen in laser cut headscarves and snug fur hoods. Venue-wise,  Natori opted for the DiMenna Center for Classical Music. “I’m a pianist and on the board of the Orchestra of St Luke’s. This is our headquarters where the orchestra does rehearsal,” said Natori of her connection with the space. “I just felt like it’s the perfect venue for me because what we do at Natori is approach design in an artful way, everything is like a work of art.” Indeed!

Veronica Beard
Taking an escape from the icy, treacherous streets of New York, Veronica Beard went on a road trip to Los Angeles for the Fall. And so it seems that sunny California is a great place to be. A few pieces in the collection encapsulated Hollywood glamour, like the silk charmeuse wrap dress in a copper hue, or the gold foil denim suit with an apropos low-cut blouse. But present-day screen sirens would benefit from the collection too, finding solace in a sharply-cut white blazer and the bustier dress cut out of a pink and black jacquard. That’s not to say that New Yorkers don’t fit into the puzzle, as the fur touches and the complex, layered pieces would fare best on the eastern coast. But from camo-print cropped pants to a burgundy jumpsuit, it’s clear that there’s a bit of something here for just about everyone.

Lisa Perry
A confection of voluminous shapes and sumptuous fabrics was all Lisa Perry needed to whip up a proper Fall 2014 collection, which she presented at her Madison Avenue store. Rather than offering a standing presentation, there were actually three mini runway shows of her collection, drawing the likes of Ariel Foxman, Cindi Leive, and Stefano Tonchi to see what she was serving up for fall. Perry delivered a dose of the no-fuss designs she’s become known for, like a black swing dress with a deep V, a grey cocoon dress, and a purple top with coordinating pants. Also thrown into the mix were trousers that were generously cut, regardless of whether they were skinny or wide-leg. A maze pattern held up the print front, while her choice in silver foil provided a futuristic vibe. As for the backdrop? “It’s by a friend I met on Instagram,” Perry explained. She was talking about Donald Robertson, who’s better known for his @donalddrawbertson handle. He covered the floors with a geometric mix of black lines, providing a scene that must’ve been positively enchanting to the pedestrians gawking from the open windows.

Tia Cibani
Few things keep the cold air at bay like a warm cup of tea, right? Revelers who stopped by Tia Cibani’s Fall presentation were welcomed with a taste of Turkish delight and a steaming cup of sugary mint tea, but there were other surprises in store, too. Housed in the Prince George Ballroom, Cibani set the tone with a collage of Persian rugs and let her clothes do the rest of the talking. Present were the pleats she loves so dearly, plus wooly cropped sweaters, romantic jacquards, and even a leopard print. The menagerie of patterns and fabrics was inspired by Iris Apfel, the most magnificent magpie of the fashion world. And she would absolutely adore the electric colors and the well-proportioned coats. The strongest look was a cocoon silk T-shirt, covered in a blurry floral, paired with skinny silk trousers and an asymmetrical skirt that played with draping and volume. Those same silk trousers made multiple appearances, but in a few different color schemes: pale lavender, deep emerald, and ruby red. Adding an element of blatant femininity to the collection, coifs were done in Rapunzel-esque braids (slightly messy, but very long). This season proves, yet again, that Cibani is one to keep watching!

Organic by John Patrick
It’s always a pleasure to take a trip, and for Spring 2014, John Patrick Organic went above and beyond, bringing his audience along to the moon. Keeping from getting too literal, there were only a few flashes of shiny silver fabric and a mere handful of jumpsuits. “I’ve been spending a lot of time in the desert, down in the Southern Baja,” John Patrick explained to The Daily. “The landscape there is dry and kind of scraggy, which is what it looks like on the moon.” So how does one stay warm on the moon? Fur, in the form of full-length jackets and a coordinating T-shirt and short combo. One show-goer wondered aloud if the fur was real, but this all-organic label opted to go faux, not surprisingly. Another warm option was a mixed-media jacket, topped off with fur sleeves, a PVC trim and a crisp cotton body. While Patrick may have chosen to leave Earth, formal touches did find their way into this collection; there were proper white collars peeking out of navy toggled jackets and prim jumpers. The one piece that was fit for a chic alien featured a grey merino ankle-length skirt, topped with a layered tunic and crop top, all finished off with a floor-length cape in a luscious cream hue. And as for moon boots? They got a chic redux by Ria in white, were cut to the ankle and featured a thin black sole. So what would Patrick’s spaceship be called? “Love! And anyone who wants to come is invited!”

All About Adam (Selman)

Sasha Pivovarova On Her Balenciaga Campaign and...