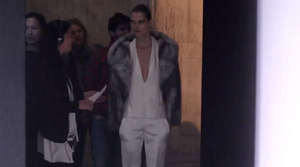 (NEW YORK) Alexander Wang has launched his Fall 2013 advertising campaign featuring Polish model Malgosia Bela, who closed his Fall runway show earlier this year (and the same stunner The Daily featured on our February 11th cover during NYFW). In the black and white photo, shot by Steven Klein and styled by Camilla Nickerson, Bela’s strong features and chiseled cheekbones are highlighted by a slick cropped hairdo by Julien d’Ys. The coif effect: an androgynous look that we swear makes her look like a young Jim Carroll. Accompanying the campaign is a “confessional video” produced and directed by Peter Szollosi. In the vid, Bela reflects on her career, sharing that that when she was first discovered, her only fashion context was culled from George Michael‘s music video “Freedom,” which famously featured a slew of top models, including Naomi Campbell and Cindy Crawford. But after nine years on the catwalk, Bela, who is now a mother, says, “I would say I’ve calmed down a lot in the last nine years. No one would say that about me, but I feel it.” And while no one would say of Wang that he’s calmed down since his debut on the fashion scene, one could say he’s also growing up in his own right. Bela-issima!

12 Top Mods including Lara Stone and...